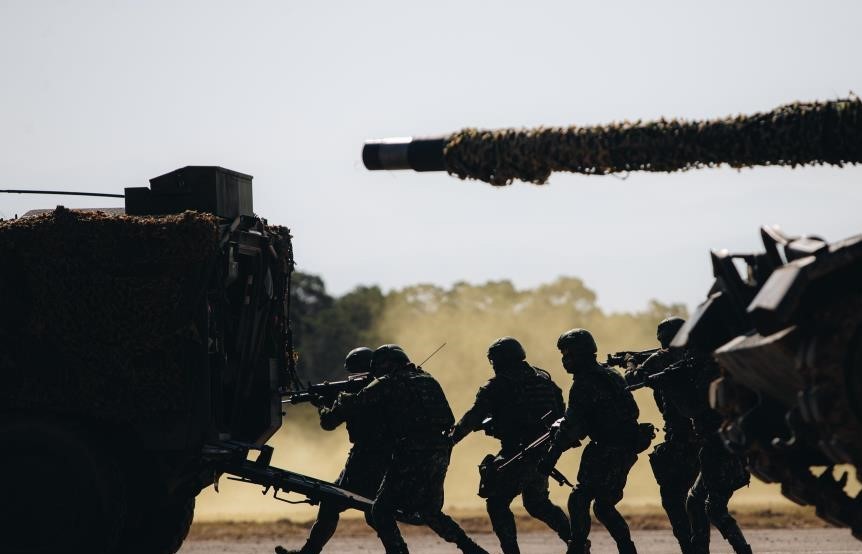 The Army simulated a Chinese attack on Taoyuan International Airport ahead of the Lunar New Year, conducting operations in Hsinchu’s Hukou Township. The aim of the exercise was to hone the battalion’s suppressive fire capabilities, battlefield surveillance abilities, and defense skills, the Army explained. It added that soldiers practiced destroying the enemy’s anti-armor weapons, air strike coordination, and armored vehicle offensive maneuvers.

Amid all the organized chaos, the military debuted its unmanned helicopter. The Ministry of Defense (MND) revealed that the helicopter drones are expected to be officially deployed with troops in the first quarter of 2022.

Lieutenant Colonel Huang Yu-ting (黃煜庭), commander of the 584th brigade’s joint arms battalion, said that the new drone has a maximum altitude of 3000 meters, a range of five kilometers, and can operate in winds as strong as level six on the Beaufort scale. He said that the drone can observe enemy targets at a distance and send information back to the operations command center. The commander also stated that the information the drones provide helps make the overall battlefield situation more transparent, allowing those in command to dole out better orders.

During the exercise, an imaginary Chinese force attacked and captured Taoyuan International Airport. After receiving the order, the Army first unleashed a wave of suppressive fire with its mortar variants of the Clouded Leopard armored vehicle. Then, a surveillance platoon used an unmanned helicopter drone to observe the enemy before a main force immediately launched a counter-attack.

After a special operations sniper killed the enemy commander, an anti-armor platoon used TOW missiles to fire on the foe’s solid fortifications. Another platoon then used 120mm mortars to provide cover for CM-11 tanks and accompanying Clouded Leopard vehicles. The charging armored vehicles moved in formation to successfully capture the main building of the airport.