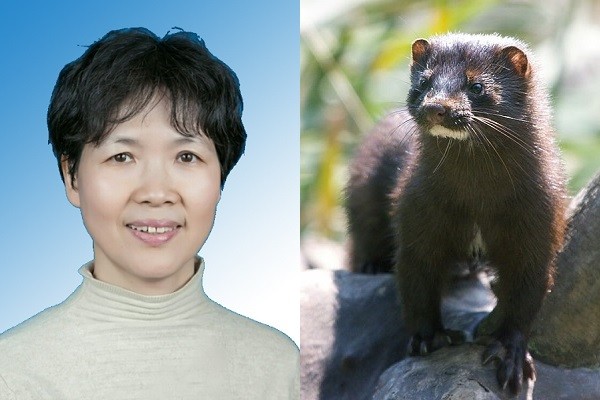 TAIPEI (Taiwan News) — An Australian geneticist is disputing claims by China that minks may have been the source of the Wuhan coronavirus and puts to rest any notion that the pandemic started at a Huanan wet market.

With the arrival of a team of experts from the World Health Organization (WHO), global scrutiny is locked on the Wuhan Institute of Virology (WIV) as a potential source of the coronavirus pandemic. Meanwhile, the Chinese government is pushing the narrative that a leak from the lab is a "conspiracy theory" and that the only possible explanation is that the virus came from nature.

The global scientific community agrees that at least the backbone of the virus came from bats in China's Yunan Province. Scientists believe SARS-CoV-2, the virus which causes COVID-19, was not transmitted directly from bats to humans but went through an intermediate animal, either in the wild or the lab.

However, over a year since the start of the outbreak, no intermediary animal has been found that could have interacted with both the right species of bats and humans. On Jan. 8 of this year, Shi Zhengli (石正麗), also known as "Bat Woman," who has been studying and manipulating bat viruses at the WIV for years, published a paper titled "sars-cov-2 spillover events" purporting that minks were the source of the pandemic.

She cites the ability of the virus to be transmitted back and forth between minks as making the semiaquatic mammals the most likely culprit in the first "spillover event." She states that COVID-19 infections have been reported in mink farms in eight countries but, significantly, fails to mention any mink-related outbreaks in China, where the pandemic began.

Taiwan News spoke to an Australian geneticist who publishes scientific papers under the name Zhang Daoyu for his take on the mink origin theory. Zhang said that the problems with Shi's theory are many, including the lack of bats or minks in Wuhan's infamous wet market, the lack of minks in Yunnan, and the lack of horseshoe bats in northeastern China.

Minks not endemic to Yunan

Zhang said that the type of minks that have been found to carry COVID-19 are Neovison Minks. These animals are confined exclusively to mink farms in northeastern China and are not naturally occurring in Yunan, where the kinds of bats that carry the coronaviruses related to COVID-19 are located.

The farms are located in the provinces of Heilongjiang, Jilin, Liaoning, Hebei, and Shandong, as the animals thrive in colder climates. The southernmost of these provinces, Shandong, is over 900 kilometers away from Wuhan and over 2,700 km from Yunnan. Likewise, the types of bats endemic to northeast China do not carry the kinds of coronaviruses associated with SARS and COVID-19. Those coronaviruses are only found in horseshoe bats in the caves of Yunnan Province.

Technically, Zhang said the receptor-binding motif (RBM) and ACE2-binding receptor-binding domain (RBD) of SARS and COVID-19 are only ever found in Yunnan bats. He added that "the bats in northeastern China are completely harmless" because they do not contain the full RBM of SARS-CoV, only bat coronavirus HKU3.

As for rumors that bats were sold in the Huanan Seafood Wholesale Market in Wuhan, Zhang said that there is no footage from the market to prove this. Ji Rong, spokesperson for the Chinese Embassy in India, tweeted on May 12, 2020, that the "Wuhan Huanan seafood market does not sell bats."

In response to some reports that there were "minks" being sold at the market, Zhang said the Chinese word for the creatures there is “青根貂,” which actually means "muskrat."

Zhang said minks are always slaughtered at the farms where they are raised before their pelts are put up for sale. Given that neither bats nor minks were sold, dead or alive, at the market, there is no chance that bats transmitted a virus to minks at the market. Furthermore, Zhang said all the coronavirus samples taken at the wet market have already picked up two mutations not found in any animals, meaning that the market cannot be the origin. In technical terms, the ORF8 mutations in the market cases are hyperdominant, but are not ancestral, which means that the mutations are not found in bats or any other animals.

Zhang explained that ORF8 is a rapidly evolving accessory protein that removes major histocompatibility complex (MHC) from cells and interferes with immune response.

In addition, one early case not connected to the market, along with those that person infected, lacked these mutations and had two ORF8 nucleotide positions that were identical to all other bat and animal coronaviruses, Zhang said. This indicates that this individual was closer to original source of the outbreak.

In light of the WHO's trip to Wuhan, a researcher who goes by the pseudonym Billy Bostickson and his colleagues at DRASTIC (Decentralized Radical Autonomous Search Team Investigating COVID-19) have created a petition demanding that the international investigation team answer 50 key questions about the outbreak in Wuhan. Among the questions is a request to access the facility's database and laboratory records, which are supposed to go back 20 years, as well as its safety procedures, safety audit reports, and safety incident reports.