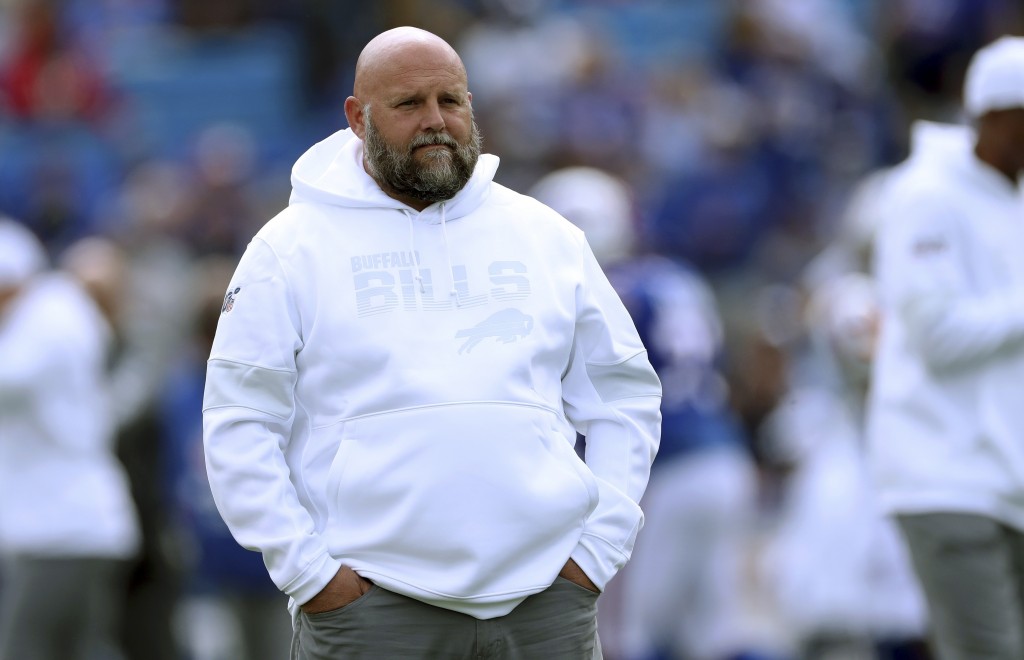 ORCHARD PARK, N.Y. (AP) — The likelihood of Bills offensive coordinator Brian Daboll staying in Buffalo for at least more season has increased after he was passed over in filling the Los Angeles Chargers coaching job, two people with direct knowledge of Daboll’s plans told The Associated Press.

The people spoke to The AP over the past two days on the condition of anonymity because Daboll declined to discuss his future during his weekly video conference call on Monday.

One person said Daboll isn’t expected to consider the NFL’s remaining vacancies, in Detroit, Philadelphia and Houston, and will now place his sole focus on preparing the Bills to face Kansas City in the AFC championship game on Sunday.

The second person said Daboll has no interviews scheduled for the coaching openings. The person said that while it’s more likely Daboll will return for a fourth season in Buffalo, nothing is certain so long as head coaching jobs remain open this offseason.

Daboll said he’s focusing his attention on Buffalo’s next game, in reiterating what he’s said in the past when questions about his future are raised.

“Humbled, honored to have some opportunities. The ultimate goal is to become a head coach one day,” he said. “But that’s not on the agenda right now for me. It’s doing everything I can to help our team be the best they can be this week.”

Daboll spoke a day after the Chargers hired Los Angeles Rams defensive coordinator Brandon Staley to replace Anthony Lynn. The hiring came a day after the Rams were eliminated from the playoffs following a loss at Green Bay.

Daboll was a candidate for the Chargers’ job after interviewing with the team the previous weekend. Daboll had ties to Chargers GM Tom Telesco, as the two attended the same suburban Buffalo high school.

He was also interviewed by the New York Jets, who filled their vacancy by hiring 49ers defensive coordinator Robert Saleh on Thursday.

Should the Bills beat the Chiefs, teams would have to wait until after Buffalo's season ended following the Super Bowl on Feb. 7 to hire Daboll.

“I think Brian's very qualified to become a head coach,” McDermott said. “At the end of the day, we're happy to have Brian with us for as long as he's been with us, and hopefully moving forward as well.”

In his 20th NFL season, the 45-year-old Daboll emerged as a head-coaching candidate because of the job he’s done in developing third-year starter Josh Allen, and transforming the team’s offense into one of the NFL’s most dynamic this season.

Allen broke numerous franchise passing and scoring records, while answering criticism about his accuracy. He finished fourth in the NFL in completing 69.2% of his attempts, which marked a 10.4% jump over the previous season.

The offense, meantime, set a franchise record by scoring 501 points, and played a key role in helping the Bills (15-3) win their first AFC East title in 25 years and make their first conference championship game appearance since 1994.

Daboll took over in Buffalo in 2018, a few months before the Bills traded up five spots to select Allen with the No. 7 pick in the draft.

Daboll is noted for devising elaborate opponent-specific game plans taking advantage of Allen’s strengths as a dual-threat and an experienced group of receivers made up of All-Pro Stefon Diggs, Cole Beasley and John Brown.

Bills players have enjoyed playing under Daboll so much that they hesitated to provide glowing reviews in fear of him leaving.

“I don’t even want to talk about it,” Beasley said, last month when asked how he would pitch Daboll to another team. “He’s not going anywhere. He’s staying on the team. I told him he can’t leave until I’m done.”