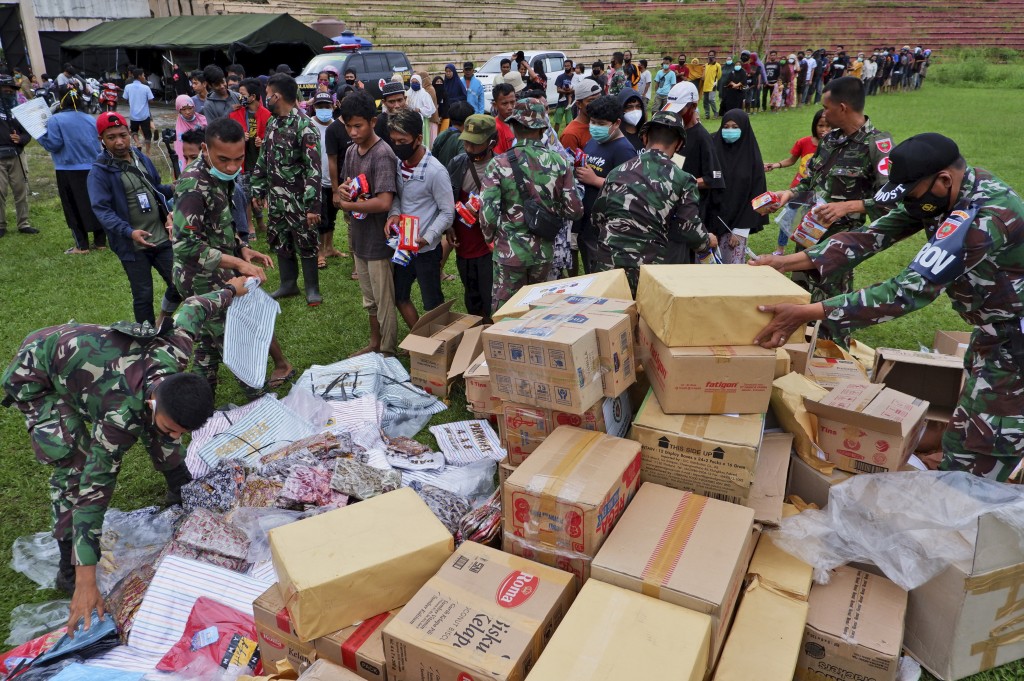 MAMUJU, Indonesia (AP) — Aid was reaching the thousands of people left homeless and struggling after an earthquake that killed at least 81 people on an Indonesian island where rescuers intensified their work Monday to find those buried in the rubble.

More rescuers and volunteers were deployed in the hardest-hit city of Mamuju and the neighboring district of Majene on Sulawesi island, where the magnitude 6.2 quake struck early Friday, said Raditya Jati, the National Disaster Mitigation Agency’s spokesperson.

He said a total of 70 people died in Mamuju and 11 in Majene, and about 27,850 survivors were moved to shelters. Nearly 800 people were injured, with more than half of them still receiving treatment for serious injuries.

Water, which has been in short supply, as well as food and medical supplies were being distributed from trucks. The military said it sent five planes carrying rescue personnel, food, medicine, blankets, field tents and water tankers.

Volunteers and rescue personnel erected more temporary shelters for those left homeless in Mamuju and Majene.

Most were barely protected by makeshift shelters that were lashed by heavy monsoon downpours. Only a few were lucky to be protected by tarpaulin-covered tents. They said they were running low on food, blankets and other aid, as emergency supplies were rushed to the hard-hit region.

Mahatir, a relief coordinator for volunteer rescuers, said his team was trying to reach many people in six isolated villages in Majene district after the quake damaging roads and bridges. Aid and other logistic supplies can be distributed only by foot over the severe terrain, said Mahatir who goes by one name.

Jati said at least 1,150 houses in Majene were damaged and the agency was still collecting data on damaged houses and buildings in Mamuju.

Mamuju, the provincial capital of nearly 300,000 people, was strewn with debris from collapsed buildings. The governor’s office building was almost flattened and a shopping mall was reduced to a crumpled hulk.

The disaster agency said the army corps of engineers cleared the road connecting Mamuju and Majene that had been blocked by landslides. They also rebuilt a damaged bridge.

The disaster agency’s chief, Doni Monardo, said authorities were trying to separate high- and lower-risk groups and provided tens of thousands of anti-coronavirus masks for those needing shelters. He said authorities would also set up health posts at the camps to test people for the virus.

People being housed in temporary shelters were seen standing close together, many of them without masks, saying that they difficult to observe health protocols in this emergency situation.

West Sulawesi province has recorded more than 2,500 cases of the coronavirus, including 58 deaths. Indonesia has confirmed nearly 908,000 cases and almost 26,000 fatalities.

Many on Sulawesi island are still haunted by a magnitude 7.5 earthquake that devastated Palu city in 2018, setting of a tsunami and a phenomenon called liquefaction in which soil collapses into itself. More than 4,000 people were killed, including many who were buried when whole neighborhoods were swallowed in the falling ground.

Indonesia, home to more than 260 million people, is lined with seismic faults and is frequently hit by earthquakes, volcanic eruptions and tsunamis. A magnitude 9.1 earthquake off Sumatra in 2004 triggered a tsunami that killed 230,000 people in a dozen countries.