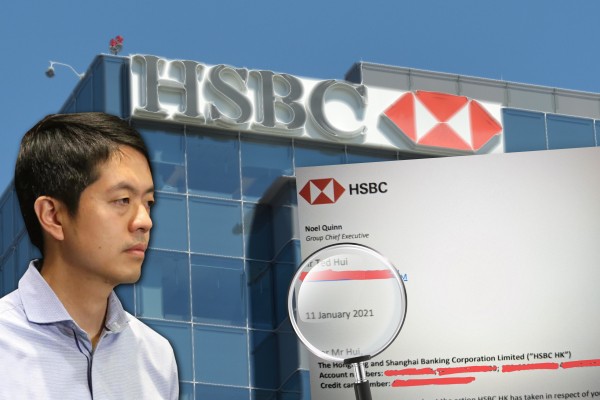 TAIWAN (Taiwan News) — Hongkonger-in-exile Ted Hui (許智峯) recently revealed the explanation given to him by HSBC Holdings CEO Noel Quinn for his frozen accounts and called the bank "an accomplice of human rights infringement."

The former Hong Kong legislative councilor found his HSBC accounts frozen and his credit card canceled after he announced his exile last December. Soon after, his family also faced the same treatment. Altogether, hundreds of thousands of Hong Kong dollars have been confiscated by the bank.

The bank's decision was followed by the groundless accusation from the Hong Kong police that Hui was involved in money laundering and graft, which Hui has described as political retaliation.

In the letter Hui received from Quinn on Jan. 11, the British banker said the organization was legally bound to take action following notification from the Hong Kong police. Quinn said the bank's previous assertion that Hui’s credit card account was canceled due to a “commercial decision” was incorrect, as it was frozen like his other accounts.

According to Hui, it was the first time HSBC provided an official response since he lost access to his accounts on Dec. 4.

Hui lambasted the bank for its extralegal collective punishment of his family, for which no explanation was provided.

"Under the Organized and Serious Crimes Ordinance, freezing of accounts always starts with a bank finding suspicious transactions in the accounts. Then, the bank files a Suspicious Transaction Report to the Joint Financial Intelligence Unit (JFIU) before the police issue a No Consent letter to demand freezing of accounts," Hui claimed.

He pointed out that HSBC has not conducted any investigations to determine whether suspicious transactions occurred with his accounts, as required by the JKIU. It merely deemed his accounts suspicious because “the police said so," as he put it.

Moreover, he stated that the bank's about-face regarding his credit card's cancellation only after enormous public criticism just shows that none of the explanations presented hold water.

In the face of mounting evidence that HSBC is operating at the behest of Hong Kong’s pro-Beijing administration, Hui appealed to the British government and others around the world to pursue formal inquiries into the bank's conduct and consider imposing sanctions, as it has become a key player in the oppression of Hong Kong’s citizenry.