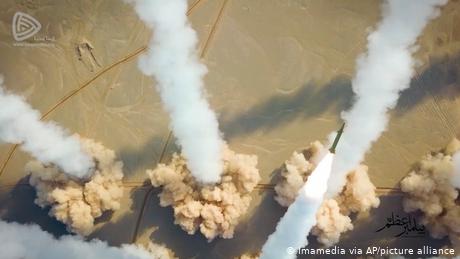 The drill took place amid a pressure campaign by the United States against the Islamic Republic and heightened tensions over Tehran's nuclear program.

What was the range of the missiles?

The missiles of "various classes" had "destroyed" their target from 1,800 kilometers (1,125 miles) away, according to the Sepahnews website.

The missiles were fired from central Iran, the Revolutionary Guard said.

Chief of Staff General Mohammad Baqeri said while Iran had "no offensive intentions," it would now be able to "respond to any hostile and malicious act in the shortest time."

Saturday's test was the third military exercise in less than two weeks after a naval exercise in the Gulf of Oman on Wednesday and Thursday and an army drone drill on January 5-6.

The drill also took place just days after Tehran marked the anniversary of the assassination of revered Guards commander Qasem Soleimani, who was killed in a US drone strike in Iraq in January last year.

Dubbed Great Prophet 15, the latest exercise also featured a drone attack on a missile defense system followed by the launch of a barrage of "new generation" surface-to-surface ballistic missiles.

Fears over US tensions

The war games come at a time of rising tensions with the US in the final days of President Donald Trump's administration.

Amid Trump's final days as president, Tehran has recently seized a South Korean oil tanker and begun enriching uranium closer to weapons-grade levels, while the US has sent B-52 bombers, the USS Nimitz aircraft carrier and a nuclear submarine into the region.

Tehran's stepped-up military drills are widely seen as aimed at pressuring President-elect Joe Biden over the Iran nuclear deal, which he has said the US could reenter after Trump unilaterally withdrew in 2018.

Trump cited Iran's ballistic missile program among other issues in withdrawing from the accord. Before exiting the agreement, Trump's own government, however, certified multiple times that Iran was adhering to the deal.

Iran has a missile capability of up to 2,000 kilometers, far enough to reach archenemy Israel and US military bases in the region.