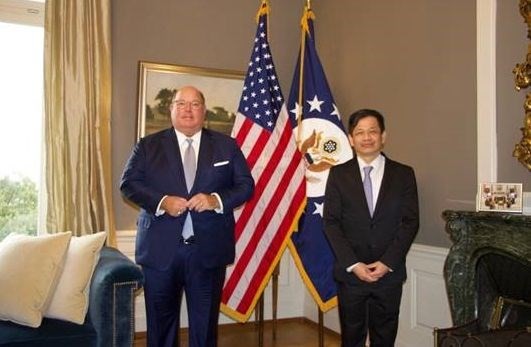 Taiwan's representative to Switzerland met with his U.S counterpart on Thursday, the latest Taiwanese diplomat to meet a U.S. official after the U.S. ended its restrictions on official contacts with Taiwan on Jan. 9.

The meeting was revealed when Edward McMullen, U.S. ambassador to Switzerland and Liechtenstein, said he was delighted to officially meet with Taiwan's representative to Switzerland David Huang (黃偉峰) in a tweet posted on Friday. The U.S. and Taiwan share common values of freedom, rule of law, and respect for human dignity, McMullen tweeted.

In an interview with CNA on Saturday, Huang, who heads the Taipei Economic and Cultural Office in Switzerland, said McMullen invited him to meet on Thursday at the U.S. embassy in Switzerland shortly after the U.S. lifted a ban on official contacts with Taiwan. During the meeting, Huang said he extended Taiwan's appreciation to the U.S. for the support it has shown to Taiwan's government and people.

McMullen said he had brought up the issues regarding the decades-old restrictions to the State Department and later to U.S. Secretary of State Mike Pompeo when he visited Switzerland in 2019. Huang was not the only Taiwanese representative who met with a U.S. diplomat after the self-imposed ban was lifted.

Two days after the restrictions were put to end, Taiwan's representative to the Netherlands Chen Hsing-hsing (陳欣新) met with Pete Hoekstra, U.S. ambassador to the European country.

Pompeo declared on Jan. 9 that the restrictions on contacts that have been in place since Washington cut ties with Taipei "null and void." According to a source familiar with the practice, the now-invalid guidelines had forbidden diplomats and military members from Taiwan to display their national flag at U.S. government venues, as well as all symbols of Taiwan sovereignty from being displayed on U.S. premises.

As part of the guidelines, Taiwanese representatives overseas were also not allowed to meet U.S. counterparts at American embassies around the world.
While the lifting of the ban was welcomed in Taiwan, skeptics have seen the move more as a publicity stunt in the waning days of Donald Trump's presidency to infuriate China and reduce the amount of room for maneuver on China and Taiwan policy for President-elect Joe Biden.

There is no indication as of yet whether the Biden administration, which takes over the reins of government in four days, will uphold the decision and put it into practice.