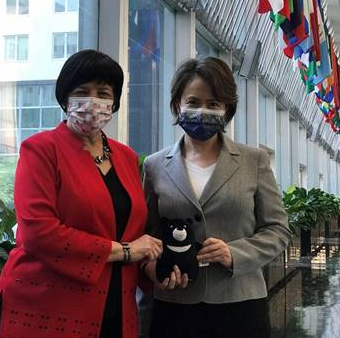 U.S. Ambassador to the United Nations Kelly Craft was recently spotted heading to work with a stuffed black bear poking its head out of her bag.

On Jan. 15, Hsiao met with Pryor, the senior bureau official for International Organization Affairs, a key contact considering Taiwan’s campaign to join global bodies in the face of Chinese opposition.

While their conversation was focused on serious political and diplomatic issues, Hsiao emphasized how Taiwan could contribute more to the world if it joined international organizations, and Pryor also mentioned the presence of a special guest, the Liberty Times reported.

“This special visitor, #Taiwanbear, joined our conversation today about Taiwan’s exceptional contributions to global health and prosperity. He is always welcome!” Pryor tweeted.

In a separate tweet, the State Department official said it was time to end Taiwan’s exclusion in view of its long history of positive international engagement.