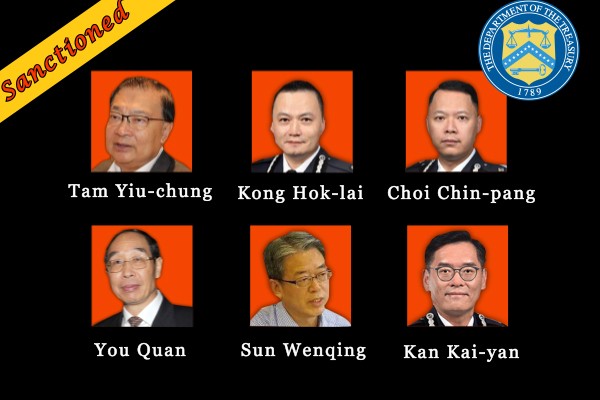 TAIPEI (Taiwan News) — The U.S. Department of the Treasury has added six Chinese and Hong Kong officials to its sanctions list following the crackdown earlier this month in which more than 50 Hong Kong pro-democracy activists were arrested.

All the officials are connected to the national security law Beijing implemented last summer to clamp down on pro-democracy elements in Hong Kong.

Choi Chin-pang (蔡展鵬) is the Hong Kong senior assistant police commissioner, and Kan Kai-yan (簡啟恩) and Kong Hok-lai (江學理) are also high-ranking officials of the force. Sun Wenqing (孫文清) is the deputy chief of Beijing's national security office that was established in the city by the security law.

Another sanctioned official, You Quan (尤權), holds a top position in China's central government as head of the United Front Work Department, which directly reports to the Chinese Communist Party's Central Committee. Tam Yiu-chung (譚耀宗) is the Hong Kong delegate to the Standing Committee of the National People's Congress, who helped pass the national security law last June.

A former legislative councilor, Tam once recommended that the security law be retroactive and penalties be made more severe to deter alleged offenders.

On Jan. 15, U.S. Secretary of State Mike Pompeo called on Beijing to immediately release individuals who have been imprisoned under the law simply for exercising freedoms guaranteed under Hong Kong's Basic Law. He pledged the U.S. would continue using available tools to hold the responsible officials to account.

According to the Treasury Department, any assets in the U.S that belong to those on the sanction list will be frozen. In addition, no American citizens and enterprises, or companies doing business in the country, are allowed to provide services to those on the list.