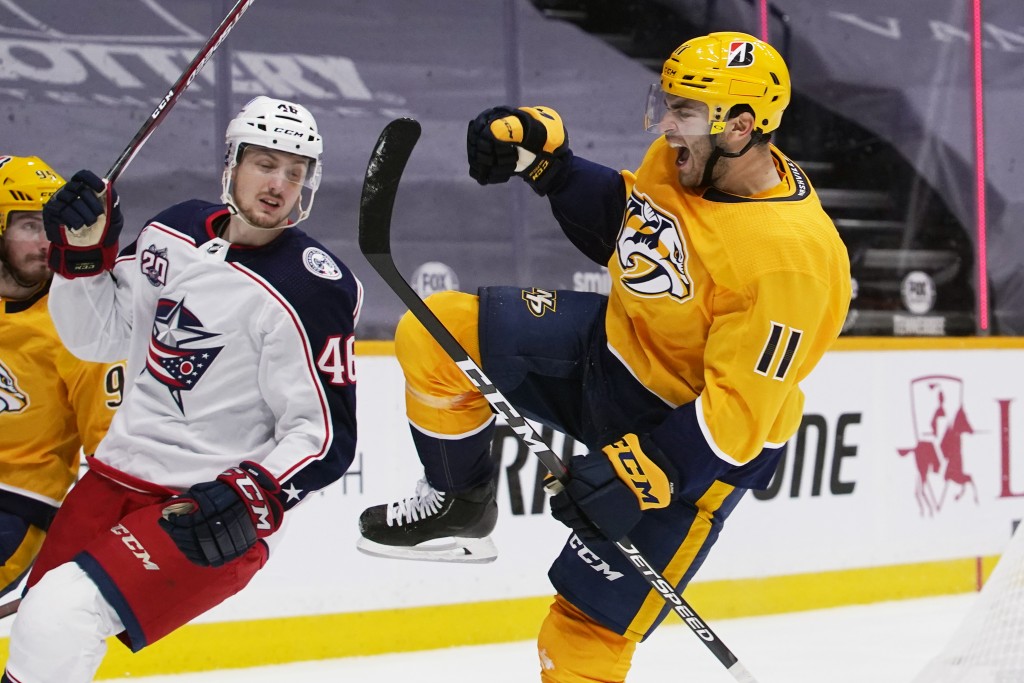 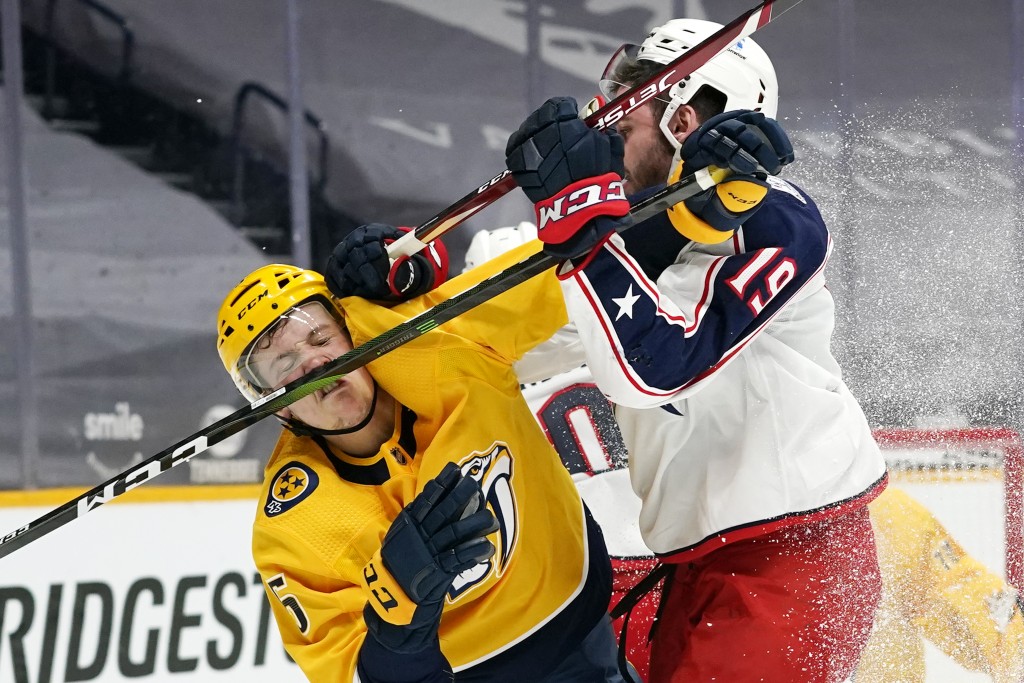 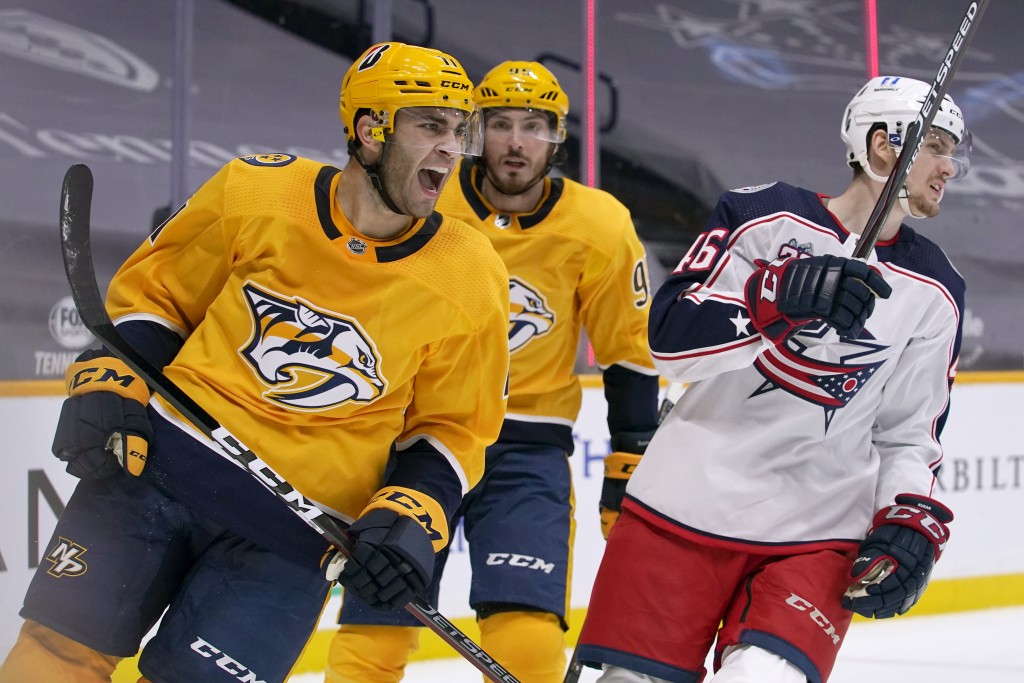 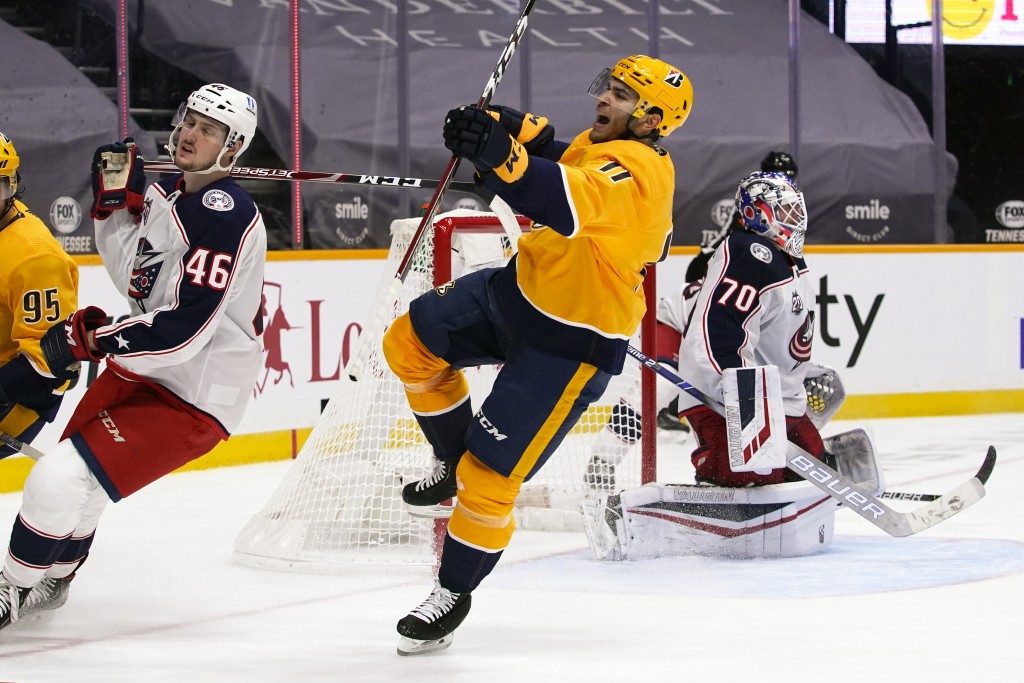 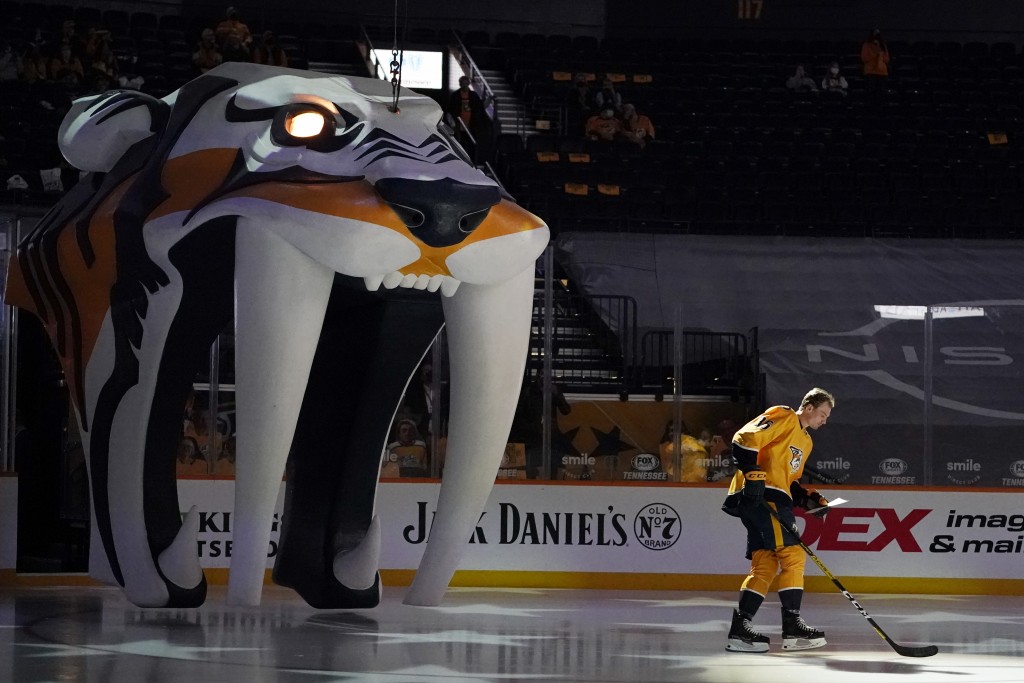 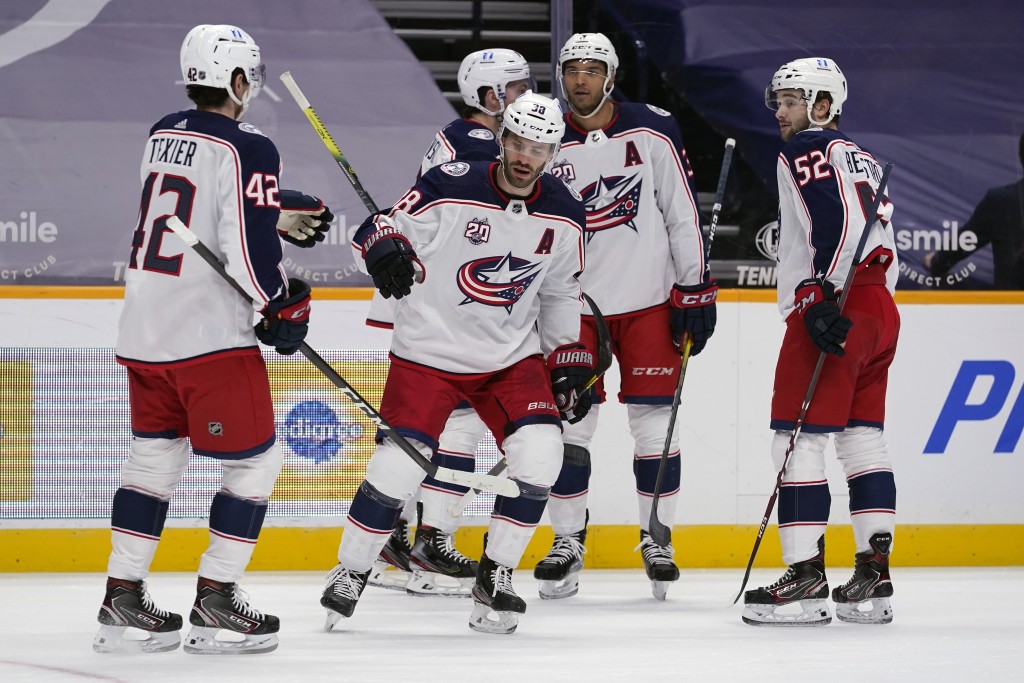 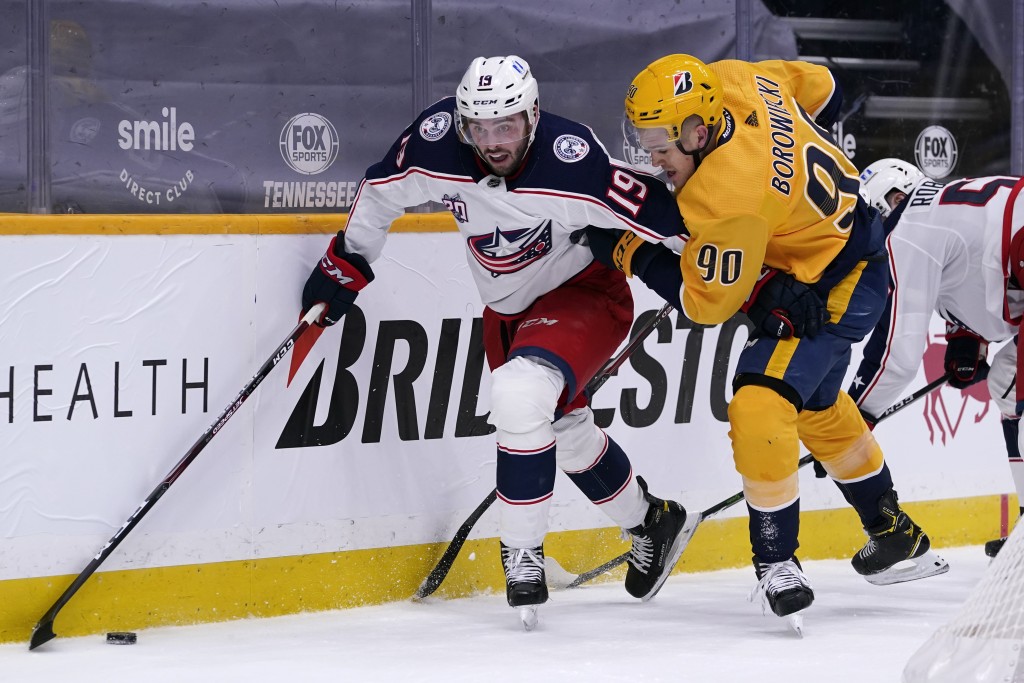 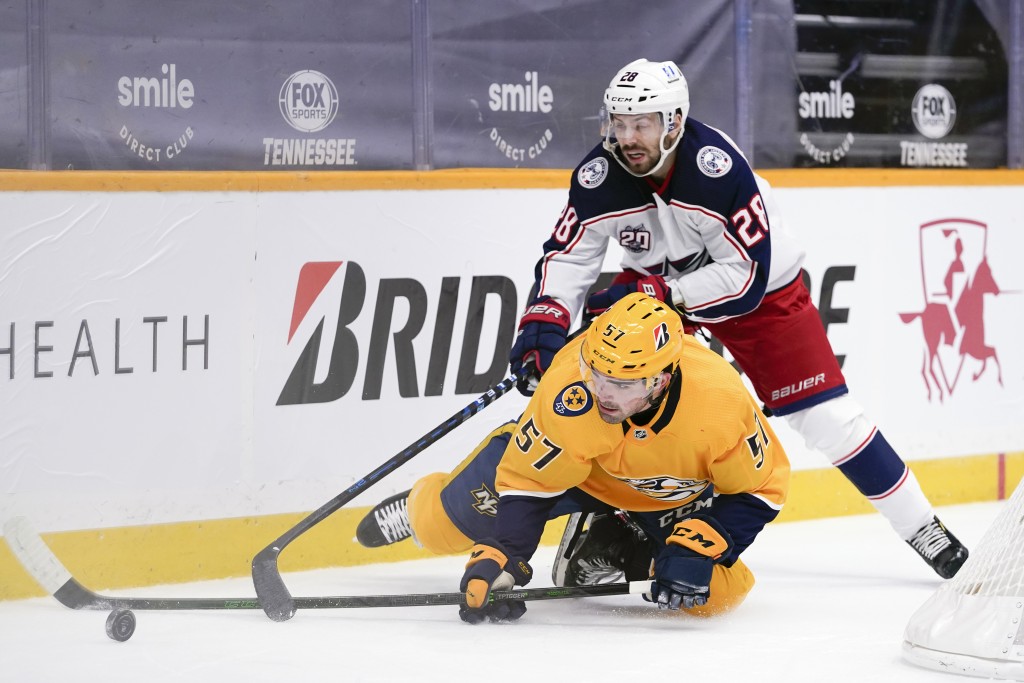 NASHVILLE, Tenn. (AP) — Filip Forsberg scored the tiebreaking goal at 5:48 of the third period to lead the Nashville Predators over the Columbus Blue Jackets 3-1 in their season opener Thursday night.

Luke Kunin and Calle Jarnkrok also scored for the Predators, who have won 11 of their last 14 home openers. Juuse Saros made 29 saves.

Boone Jenner had the goal for Columbus.

Early in the third, Nashville won a defensive-zone faceoff and Forsberg skated into the Columbus zone on the left side. From the left faceoff dot, he snapped a wrist shot by goalie Joonas Korpisalo on the short side.

Jenner scored the first goal at 9:24 of the opening period on a breakaway.

Former Predator Seth Jones cleared the puck from behind the Columbus net off the left half boards. Near center ice, the puck hopped over the stick of Nashville defenseman Dante Fabbro, sending Jenner in all alone on Saros. Jenner beat Saros high to the blocker side.

In his first game with the Predators, Kunin tied it at 13:09 of the second.

Kunin skated down the right side into the Columbus zone on a 2-on-1. Blue Jackets defenseman Michael Del Zotto sild to take away the passing lane, so Kunin fired a wrist shot high to Korpisalo’s far side.

Acquired from Minnesota in an Oct. 7 trade, Kunin missed the first couple of days of Nashville’s abbreviated training camp while working on a new contract with the Predators. The sides agreed to a two-year, $4.6 million deal last Wednesday.

Forsberg’s goal was the 167th of his career in 459 games, all with Nashville. It moved him into second place on the club list. He trails only David Legwand, who scored 210 goals in 956 games with the Predators.

Even though just a few of the 17,000-plus Bridgestone Arena seats were occupied by family, friends and first responders for the season opener, a catfish made its way onto the ice prior to the opening faceoff. A fan-tossed catfish, Nashville’s answer to the octopi thrown by Detroit Red Wings fans, has been a frequent sighting at Predators home games over the years. Thursday night’s catfish adhered to strict COVID-19 protocols and wore a blue surgical mask that fit snugly against its mouth and whiskers.

Among those in attendance were the “Nashville 6,” the six Metro Nashville Police officers who evacuated citizens from downtown residences prior to the early Christmas morning bombing on Nashville’s historic 2nd Avenue.

REUNITED AND IT FEELS SO GOOD … MAYBE

Nashville and Columbus are back in the same division due to the NHL’s realignment for this season. The Blue Jackets and Predators were Central Division foes from the time Columbus entered the NHL in 2000, two seasons after Nashville entered the league in 1998, until Columbus moved to the Eastern Conference when the league realigned for the 2013-14 season. The Predators are 60-20-1-7 all-time against Columbus.

After a day off Friday, the teams square off again Saturday night to complete their two-game series.