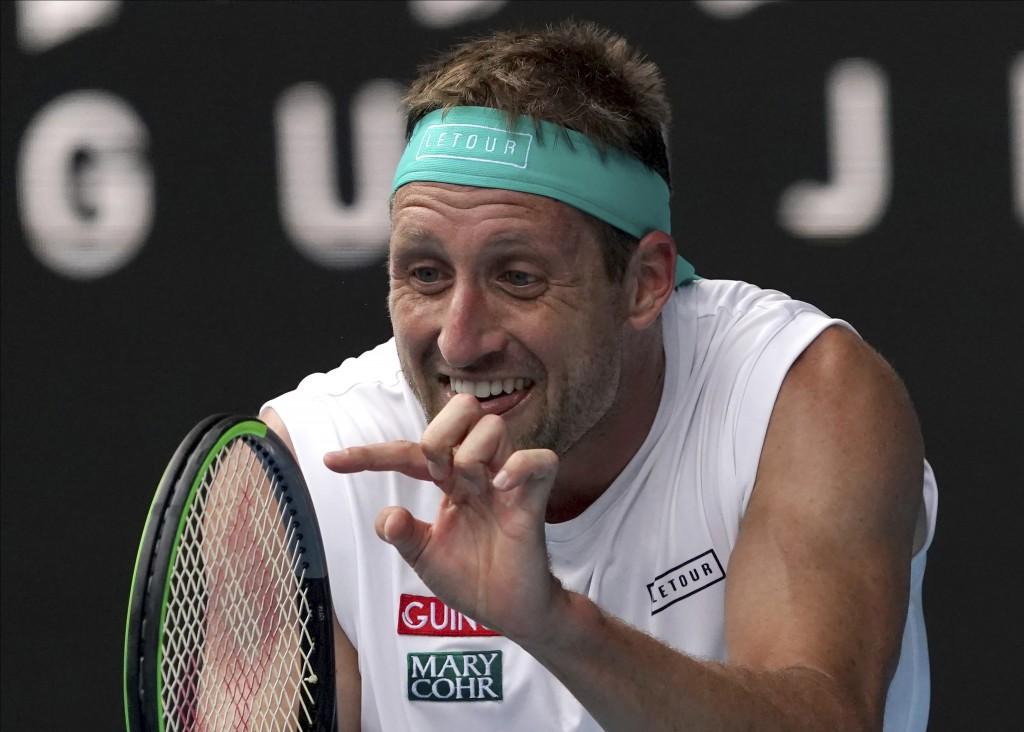 Two-time Australian Open champion Victoria Azarenka was among the earliest arrivals into Melbourne on one of the 15 charter flights bringing players and officials into the city for the first Grand Slam tennis tournament of the year.

And she wanted everyone to know she was pleased to be in Australia despite all the COVID-19 restrictions around the world and a tournament-enforced 14-day quarantine period in Melbourne.

Azarenka, who won the tournament in 2012 and 2013, tweeted Friday: “Made it to Melbourne! Thank you everyone so much for making it happen. I can only imagine how many hours of work and compromise it took for us to be here! Thank you.”

She included what appeared to be a selfie next to a window with downtown city views.

The Australian Open is set to start Feb. 8.

Stan Wawrinka, who won the Australian Open in 2014, also posted a photo of himself and two other players, all wearing masks, from what appeared to be the business class section of one of the charters. Elina Svitolina, a two-time quarterfinalist at Melbourne Park, posted a video of her spacious Melbourne hotel suite.

The charters and the early arrivals are all part of Tennis Australia’s attempt to have the tournament happen despite a ban on international arrivals into the country. To do so, they are having players undergo COVID-19 tests before they board their charter flights, again after they arrive and frequently during the quarantine period.

The first of about 1,200 players, coaches, entourage and officials landed late Thursday. The players were met by airport staff and biosecurity officials wearing personal protective equipment including masks and face shields, before being taken to hotel quarantine.

The virus news wasn’t so good for five-time finalist Andy Murray, whose status for the Australian Open was put in doubt after he tested positive for COVID-19 only days before his planned flight to Melbourne. The tournament says that the three-time Grand Slam champion, who was given a wild card for Melbourne, is isolating at home.

Tennis Australia said Murray will miss the charter flights and won’t be able “to go through the quarantine period with the other players.” His chances of appearing at the tournament appear to be in serious doubt.

“I unfortunately tested positive for (COVID-19) before I was supposed to fly to Australia,” Keys said on social media. “I’m very disappointed to not be able to play in the coming weeks after training hard in the off-season . . . I am self-isolating at home and will continue to follow all the necessary health precautions. I look forward to being back on tour next month.”

“My two tests were less than 8 weeks apart. I was sick in November, totally healthy now,” Sandgren tweeted. “There’s not a single documented case where I would be contagious at this point. Totally recovered!”

The Australian Open has already been delayed three weeks because restrictions in place for the COVID-19 pandemic. And because of the Australian restrictions, the men’s and women’s qualifying tournaments — in Doha, Qatar and in Dubai — were held outside of Australia for the first time.

The 15 charter flights were restricted to 25% capacity, and were set to arrive over a 36-hour period ending early Saturday.

Once a negative result has been returned, players can train within a strictly supervised environment for five hours per day.

The Australian Open draw will be held on Feb. 4, four days ahead of the start of the main tournament, which ends Feb. 21 with the men’s singles final.

Novak Djokovic, Rafael Nadal and Serena Williams will be among a group of players involved in an exhibition event in Adelaide, South Australia state, on Jan. 29. Those players were expected to fly straight to Adelaide to begin their hotel quarantine period.

All other tournaments will be in Melbourne, including the 12-team ATP Cup starting Feb. 1 and two WTA events in the week leading into the Australian Open.