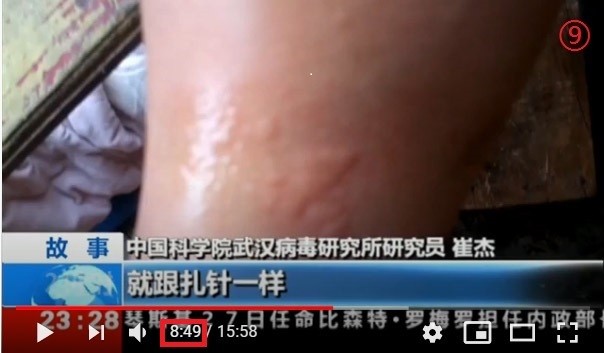 TAIPEI (Taiwan News) — A video released two years before the start of the Wuhan coronavirus pandemic shows Wuhan Insitute of Virology (WIV) scientists being cavalier toward protective equipment and being bitten by bats that carry deadly viruses such as SARS, demonstrating a lax safety culture in the lab.

On Dec. 29, 2017, Chinese state-run TV released a video designed to showcase Shi Zhengli, (石正麗), also known as "Bat Woman," and her team of scientists at the WIV in their quest to find the origin of SARS. Despite the fact that the scientists work in a biosafety level 4 lab, they show a shocking disregard for safety when handling potentially infectious bats both in the wild and in the lab.

From 4:45 to 4:56, a scientist can be seen holding a bat with his bare hands. Team members from 7:44 to 7:50 can be seen collecting potentially highly infectious bat feces while wearing short sleeves and shorts and with no noticeable personal protective equipment (PPE) other than gloves. From 8:31 to 8:34, some team members can be seen wearing complete hazmat suits while many others are interacting with them in ordinary clothing and scrub caps and still others have no head covering at all. The camera then cuts to a container full of live, thrashing bats.

Rather than describing any concern about infection from the bats, one scientist relays his harrowing tale of sliding down the top of a cave and nearly falling down a waterfall and drowning. From the 8:42-8:47 mark, one team member is wearing full scrubs, mask, and scrub cap, while another is in street clothes, scrub cap, and mask, and the third person, possibly Shi, is handing samples with her bare hands.

The narrator then states that even though the scientists are wearing gloves, the risk of being injured by a bat bite "still exists." Virus researcher Cui Jie (崔杰) relates his experiences of being bitten from 8:47 to 8:50. He said that the bat's fangs went right through his glove, which was likely nitrile. He described the feeling as "like being jabbed with a needle." The video then cuts to a person's limb showing swelling after a bat bite.

The narrator points out the fact that bats can carry a variety of potent viruses, including rabies. He then states that team members are injected with the rabies vaccine before each field sampling.

However, in an article posted in the China Science Exploration Center, which was later scrubbed by China's censors, Shi boasted that "this job is not as dangerous as everyone thinks." Although bats carry many viruses, "the odds of directly infecting humans is very small, she wrote.

She said if her researchers are aware of bats in a certain location that carry a virus that can be transmitted to humans, they will take greater precautions, but "in most cases, only ordinary protection will be utilized." Again, a scientist is seen holding and touching a live wild bat from the 8:51-9:06 mark. The video cuts back to the interior of the lab, where Hu Ben (胡犇) is shown overseeing a woman as she handles specimens from 10:26 to 10:33. Neither is wearing a mask.

From 10:45 to 10:50, a team member in a camouflage shirt and without any PPE can be seen at the entrance of a cave in Yunnan, where many coronaviruses originate, with bats flying all around him. From 10:51 to 11:12, the video cuts to three lab technicians handling samples as the narrator describes "three live viruses" collected from Yunan. None are wearing masks.

The video then cuts back to a cave in Yunan from 11:19 to 11:23 where most team members inside are not wearing any protection other than gloves. From 11:23 to 11:26, the scientists can be seen in various states of protection, from full hazmat suits to no mask or gloves, as they handle captured bats together.

A Chinese blogger uploaded a post, later deleted by Chinese censors, accusing Shi's lab of leaking the virus on June 16, 2020. The post, which can still be seen on the Internet Archive, provides an astute analysis of Cui Jie's account and the video footage provided. At the 8:48 mark, Cui mentioned his hand was bitten while he was wearing gloves, likely similar to the ones shown at the 7:52 mark. Because these gloves barely cover part of the wrist, Cui Jie's bite wound could not have occurred very far up the arm.

Yet, at the 8:49 mark, the swelling from a bat bite appears to be a forearm or calf. Thus, the video shows proof that at least two bat bites occurred as the team researched bats carrying various coronaviruses.

This footage raises a number of serious questions that World Health Organization (WHO) investigators should ask if they are allowed to speak to WIV scientists. First of all, it raises the possibility that the scientists became infected with a coronavirus, including even COVID-19, however unlikely that may be.

The WHO team will need to ask Shi if any scientists developed symptoms of any illnesses after the bites. They should also ask whether they were tested for coronaviruses and antibodies to such viruses.

Another disturbing practice was the apparent lack of the proper use of PPE when handling the viral samples in the lab. The WHO team will need to assess the possibility that an infection within the lab occurred due to inadequate safety measures or that a chimera virus was developed in gain of function experiments.

In light of the WHO's planned trip to Wuhan, a researcher who goes by the pseudonym Billy Bostickson and his colleagues at DRASTIC (Decentralized Radical Autonomous Search Team Investigating Covid-19) have created a petition demanding that the international investigation team answer 50 key questions about the outbreak in Wuhan. Among the questions is a request to access to the facility's database and laboratory records, which are supposed to go back 20 years, including a look at its safety procedures, safety audit reports, and safety incident reports.

It should be noted that one of the members of the WHO investigation team, Peter Daszak, has been accused of having a conflict of interest, as his firm EcoHealth Alliance has a partnership with the WIV. He has been working with Shi for 15 years.