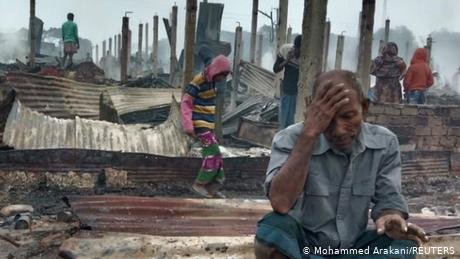 Thousands of Rohingya refugees have been left homeless after a fire torched their camps in southern Bangladesh, the UN said on Thursday.

The UN Refugee Agency (UNHCR) said more than 550 shelters had been destroyed in the camps in the southern Bangladeshi region of Teknaf. The homes housed some 3,500 people.

“Security experts are liaising with the authorities to investigate [...] the cause of fire,” the agency said, adding that no casualties were reported.

He added that an explosion of gas cylinders had hampered their efforts.

No decision has been taken as to whether shelters would be rebuilt or the refugees moved elsewhere.

Human rights groups and some refugees said a number of the re-locations were forced. The government refutes those allegations.

More than one million Rohingya live in the south of the country, with most of them fleeing a military-led crackdown in Myanmar in 2017.

The UN accused the Myanmar government of genocidal intent, which officials have repeatedly denied.