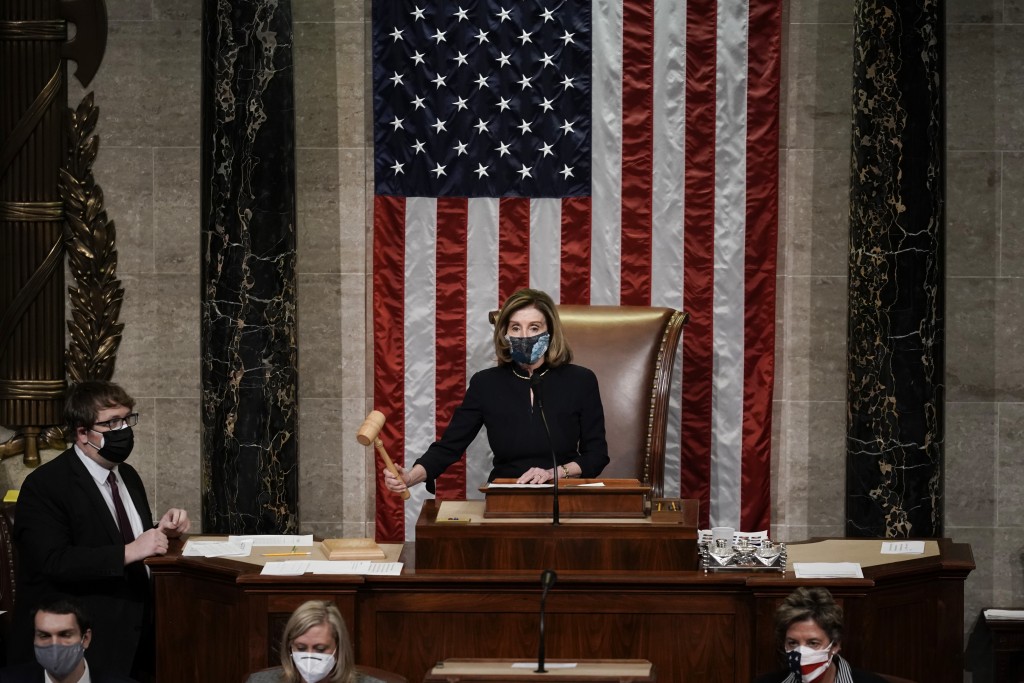 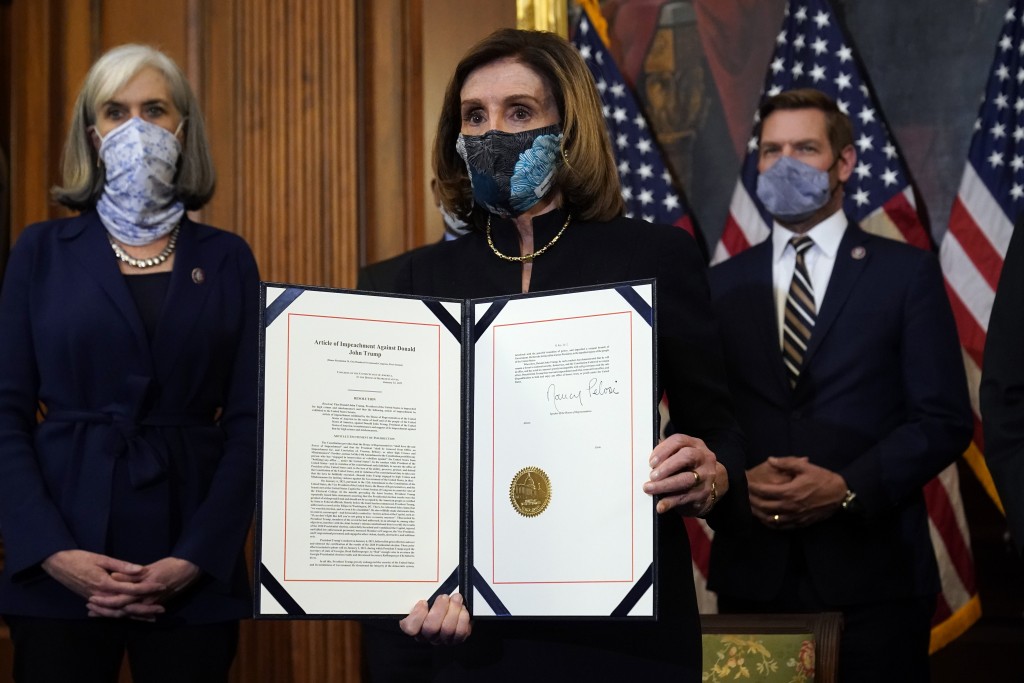 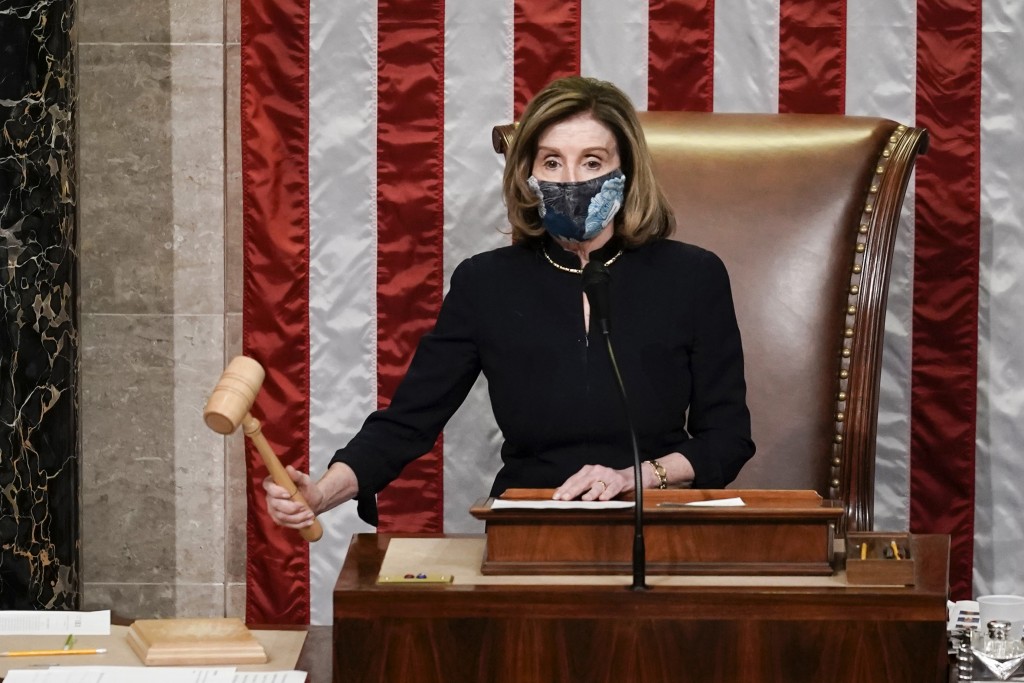 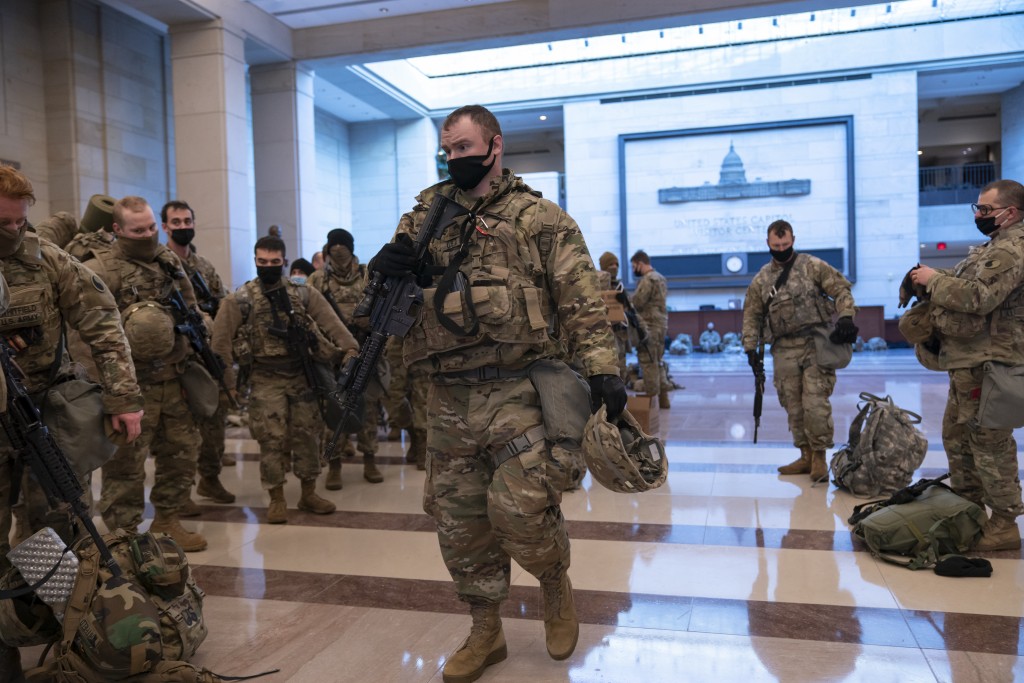 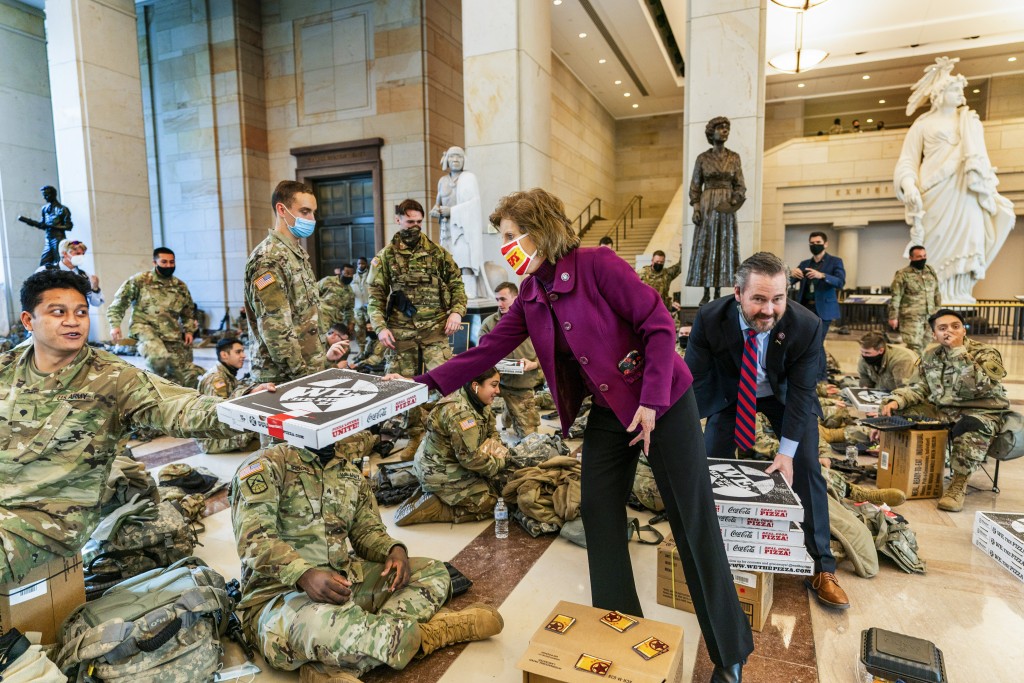 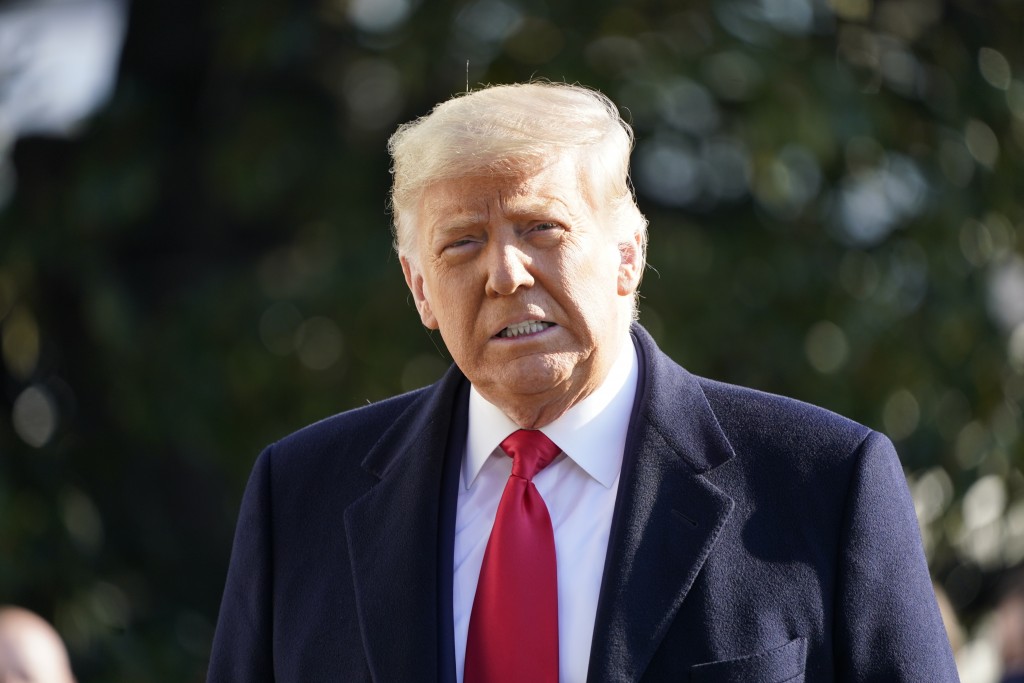 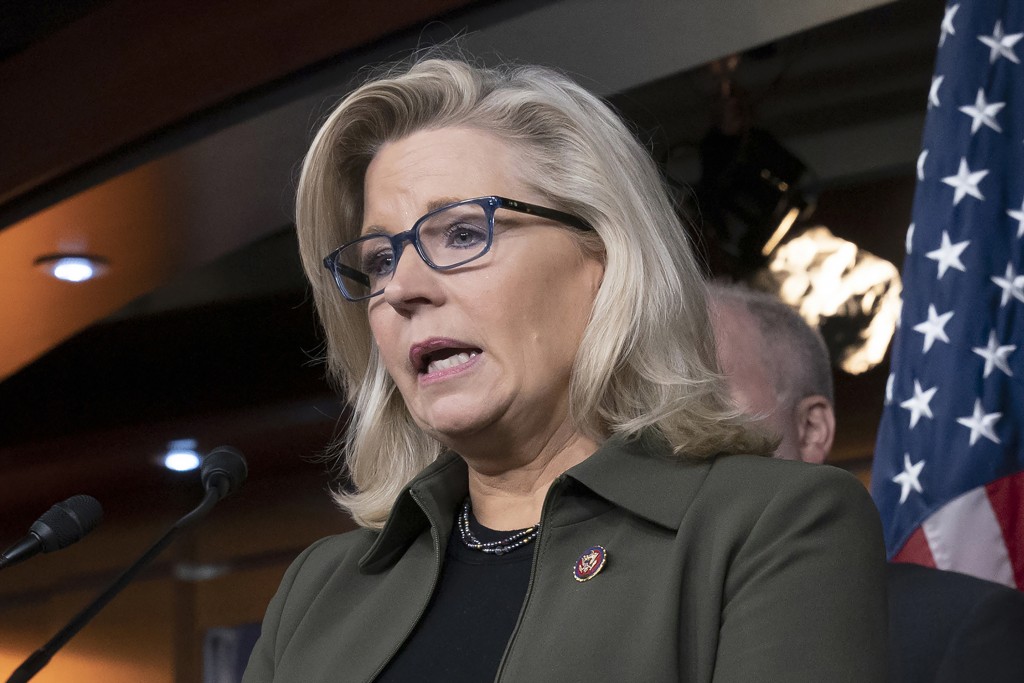 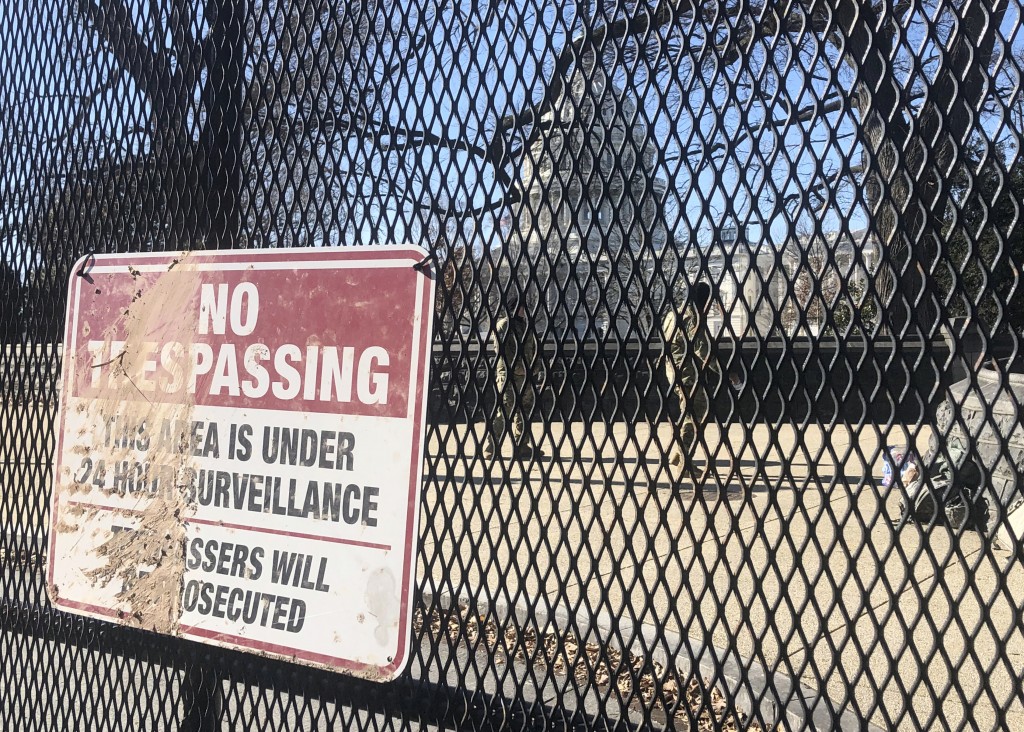 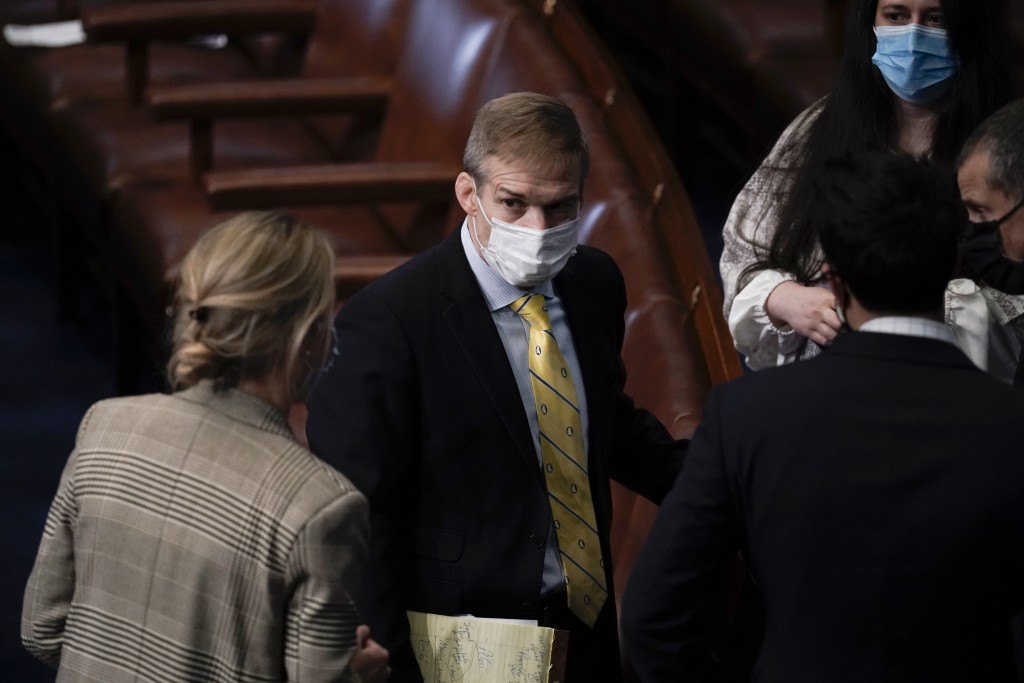 WASHINGTON (AP) — President Donald Trump was impeached by the U.S. House for a historic second time, charged with “incitement of insurrection” over the deadly mob siege of the U.S. Capitol in a swift and stunning collapse of his final days in office.

With the Capitol secured by armed National Guard troops inside and out, the House voted 232-197 on Wednesday to impeach Trump. The proceedings moved at lightning speed, with lawmakers voting just one week after violent pro-Trump loyalists stormed the Capitol, egged on by the president’s calls for them to “fight like hell” against the election results.

Ten Republicans fled Trump, joining Democrats who said he needed to be held accountable and warned ominously of a “clear and present danger” if Congress should leave him unchecked before Democrat Joe Biden’s inauguration Jan. 20.

Trump is the only U.S. president to be twice impeached. It was the most bipartisan presidential impeachment in modern times, more so than against Bill Clinton in 1998.

The Capitol insurrection stunned and angered lawmakers, who were sent scrambling for safety as the mob descended, and it revealed the fragility of the nation’s history of peaceful transfers of power. The riot also forced a reckoning among some Republicans, who have stood by Trump throughout his presidency and largely allowed him to spread false attacks against the integrity of the 2020 election.

House Speaker Nancy Pelosi invoked Abraham Lincoln and the Bible, imploring lawmakers to uphold their oath to defend the Constitution from all enemies, foreign “and domestic.”

She said of Trump: “He must go, he is a clear and present danger to the nation that we all love.”

Holed up at the White House, watching the proceedings on TV, Trump later released a video statement in which he made no mention at all of the impeachment but appealed to his supporters to refrain from any further violence or disruption of Biden's inauguration.

“Like all of you, I was shocked and deeply saddened by the calamity at the Capitol last week," he said, his first condemnation of the attack. He appealed for unity “to move forward” and said, "Mob violence goes against everything I believe in and everything our movement stands for. ... No true supporter of mine could ever disrespect law enforcement.”

Trump was first impeached by the House in 2019 over his dealings with Ukraine, but the Senate voted in 2020 acquit. He is the first president to be impeached twice. None has been convicted by the Senate, but Republicans said Wednesday that could change in the rapidly shifting political environment as officeholders, donors, big business and others peel away from the defeated president.

Biden said in a statement after the vote that it was his hope the Senate leadership “will find a way to deal with their Constitutional responsibilities on impeachment while also working on the other urgent business of this nation.”

The soonest Republican Senate leader Mitch McConnell would start an impeachment trial is next Tuesday, the day before Trump is already set to leave the White House, McConnell's office said. The legislation is also intended to prevent Trump from ever running again.

McConnell believes Trump committed impeachable offenses and considers the Democrats’ impeachment drive an opportunity to reduce the divisive, chaotic president’s hold on the GOP, a Republican strategist told The Associated Press on Wednesday.

McConnell told major donors over the weekend that he was through with Trump, said the strategist, who demanded anonymity to describe McConnell’s conversations.

In a note to colleagues Wednesday, McConnell said he had “not made a final decision on how I will vote.”

Unlike his first time, Trump faces this impeachment as a weakened leader, having lost his own reelection as well as the Senate Republican majority.

Even Trump ally Kevin McCarthy, the House Republican leader, shifted his position and said Wednesday the president bears responsibility for the horrifying day at the Capitol.

In making a case for the “high crimes and misdemeanors” demanded in the Constitution, the four-page impeachment resolution approved Wednesday relies on Trump’s own incendiary rhetoric and the falsehoods he spread about Biden’s election victory, including at a rally near the White House on the day of the Jan. 6 attack on the Capitol.

A Capitol Police officer died from injuries suffered in the riot, and police shot and killed a woman during the siege. Three other people died in what authorities said were medical emergencies. The riot delayed the tally of Electoral College votes that was the last step in finalizing Biden’s victory.

Cheney, whose father is the former Republican vice president, said of Trump's actions summoning the mob that "there has never been a greater betrayal by a President” of his office.

Trump was said to be livid with perceived disloyalty from McConnell and Cheney.

With the team around Trump hollowed out and his Twitter account silenced by the social media company, the president was deeply frustrated that he could not hit back, according to White House officials and Republicans close to the West Wing who weren’t authorized to speak publicly about private conversations.

From the White House, Trump leaned on Sen. Lindsey Graham of South Carolina to push Republican senators to resist, while chief of staff Mark Meadows called some of his former colleagues on Capitol Hill.

The president’s sturdy popularity with the GOP lawmakers’ constituents still had some sway, and most House Republicans voted not to impeach.

Security was exceptionally tight at the Capitol, with tall fences around the complex. Metal-detector screenings were required for lawmakers entering the House chamber, where a week earlier lawmakers huddled inside as police, guns drawn, barricaded the door from rioters.

“We are debating this historic measure at a crime scene,” said Rep. Jim McGovern, D-Mass.

During the debate, some Republicans repeated the falsehoods spread by Trump about the election and argued that the president has been treated unfairly by Democrats from the day he took office.

Other Republicans argued the impeachment was a rushed sham and complained about a double standard applied to his supporters but not to the liberal left. Some simply appealed for the nation to move on.

Rep. Tom McClintock of California said, “Every movement has a lunatic fringe."

Yet Democratic Rep. Jason Crow, D-Colo. and others recounted the harrowing day as rioters pounded on the chamber door trying to break in. Some called it a “coup” attempt.

Conviction and removal of Trump would require a two-thirds vote in the Senate, which will be evenly divided. Republican Sen. Pat Toomey of Pennsylvania joined Sen. Lisa Murkowski of Alaska over the weekend in calling for Trump to “go away as soon as possible.”

Fending off concerns that an impeachment trial would bog down his first days in office, Biden is encouraging senators to divide their time between taking taking up his priorities of confirming his nominees and approving COVID-19 relief while also conducting the trial.

The impeachment bill draws from Trump’s own false statements about his election defeat to Biden. Judges across the country, including some nominated by Trump, have repeatedly dismissed cases challenging the election results, and former Attorney General William Barr, a Trump ally, has said there was no sign of widespread fraud.

The House had first tried to persuade Vice President Mike Pence and the Cabinet to invoke their authority under the 25th Amendment to remove Trump from office. Pence declined to do so, but the House passed the resolution anyway.

While some have questioned impeaching the president so close to the end of his term, there is precedent. In 1876, during the Ulysses Grant administration, War Secretary William Belknap was impeached by the House the day he resigned, and the Senate convened a trial months later. He was acquitted.