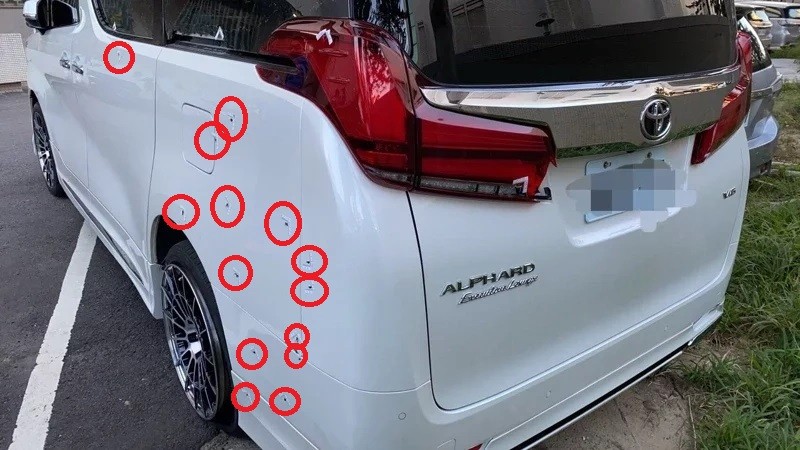 TAIPEI (Taiwan News) — Over the New Year's holiday, a gangster armed with an assault rifle fired over 60 shots at a pawnshop and minivan in central Taiwan before fleeing the scene.

At about 1 a.m. on Jan. 3, surveillance camera footage captured a car slowly pulling up in front of a pawnshop in an urban redevelopment zone in Taichung's Nantun District. When the assailant stepped out of the car, he could be seen carrying an assault rifle, which he immediately pointed at the pawnshop and a white Toyota Alphard minivan parked in front.

The occupant of the minivan, who was identified as an employee of the pawnshop, quickly exited his vehicle and ran for his life. The gunman then sprayed the right rear corner of the vehicle with over a dozen bullets.

Fortunately, many of the homes nearby are still under construction and empty, and no residents or bystanders were injured. There was, however, a FamilyMart convenience store nearby, and a clerk working the night shift heard what he thought was fireworks. When he looked out the window out of curiosity, he was surprised to see a man with a rifle shooting wildly. He quickly ducked behind the counter and did not get up until the gunfire ceased.

By the time police arrived at the scene, the gunman had already disappeared. They immediately cordoned off the area to gather evidence and commenced an investigation.

Officers found 62 spent cartridges at the scene, indicating that the man had fired at least as many rounds, reported Liberty Times. Police were perplexed by the large number of shell casings, as in previous shooting incidents, whether targeted revenge or warnings, they had never seen so many at a single crime scene. Investigators then began to track the suspect's movements, and after reviewing surveillance footage of nearby street intersections, they were able to identify his car. They were then able to determine that the man behind the wheel was a 36-year-old gangster surnamed Peng (彭).

Just as police were preparing to arrest Peng, he surrendered himself at a police station in Taichung at noon that same day. He then turned in a modified assault rifle, two magazines, and over a dozen rounds of ammunition.

During questioning with police, he confessed that he had fired at an employee of the pawnshop out of rage over a previous incident. Peng claimed he had engaged in a dispute with the man at a KTV three years ago. He claimed that he had later met with the other party in the dispute in a parking lot to negotiate, but he alleges that the man assaulted him with a club, injured his hands, and fractured his right leg. He said that he was dissatisfied with the court verdict issued Nov. 25 last year and had never received an apology or compensation from his assailant, reported ETtoday.

The pain from his old injuries has allegedly intensified during the recent cold spell. After learning that the man was headed to the pawnshop, he decided to drive over to vent his anger.

However, police have suspicions about the veracity of his explanation and transferred him to the Prosecutor's Office to be investigated for violating the Controlling Guns, Ammunition and Knives Act (槍砲彈藥管制條例) and attempted homicide (殺人未遂), reported UDN.