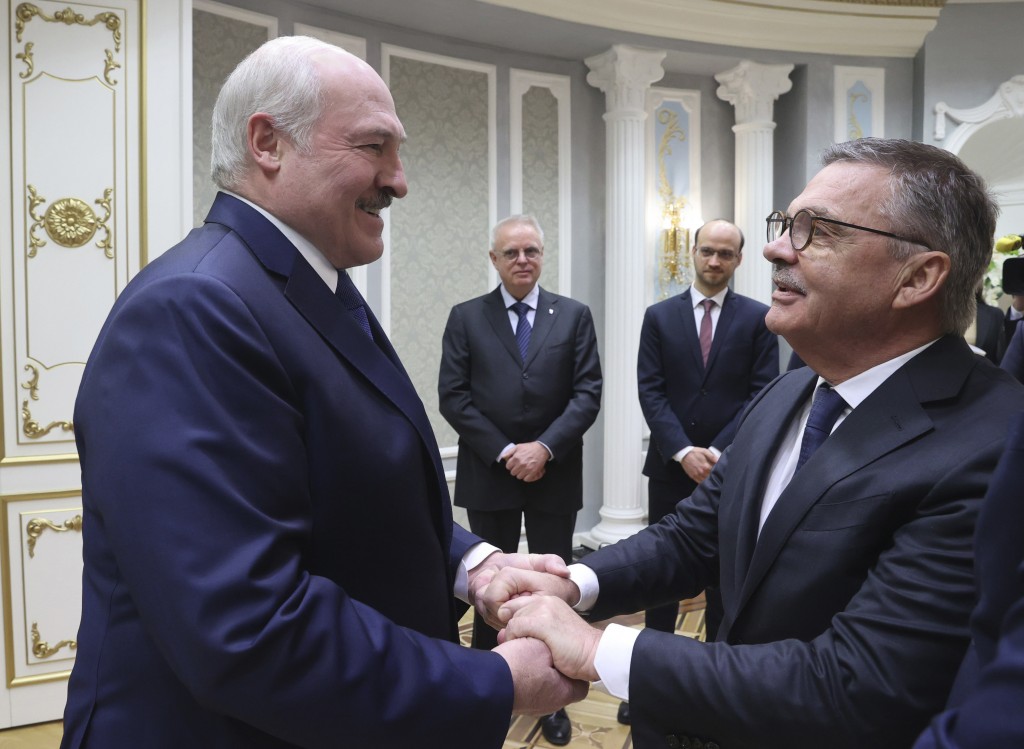 The worlds are scheduled to be co-hosted by Belarus and Latvia in May-June. Latvia, however, has urged the IIHF to let it co-host with a different country because of Belarus' crackdown on opposition groups in the country.

Fasel held talks with Lukashenko on Monday, drawing criticism from the opposition when he was pictured embracing the Belarusian president.

“If we made the impression that it was a just a friendly meeting, this is not accurate and was not our intention," Fasel said in a statement published Wednesday on the IIHF website. "This meeting was taken in a serious tone and with the IIHF bringing specific and difficult questions to the table.”

On Tuesday, Fasel told Swiss broadcaster SRF that the meeting “went a bit wrong and is also a bit embarrassing for me," referring to the attention given to the pictures of him embracing Lukashenko.

Fasel said the IIHF wants to keep Belarus and Latvia as co-hosts and isn't considering alternative bids from Denmark and Slovakia. Fasel argued the tournament could build bridges between Lukashenko and the opposition. He added that the government had told the IIHF it would hold talks.

“We are not naive to think that hosting a world championship in Minsk will solve all problems in the country, but that does not mean we cannot explore whether the IIHF can use some degree of influence to initiate positive change in the country’s future,” Fasel said.

Fasel said he had not spoken with the Belarus opposition but was “ready for dialogue.”

While speaking about the hockey world championships on Tuesday, Lukashenko said there would be limits to any talks.

“We are prepared to talk with any honest people, including with the opposition, but not with traitors,” he said.

Lukashenko has argued that Belarus should get sole hosting rights for the tournament if Latvia no longer wants to co-host.

Mass protests swept Belarus, a former Soviet nation of 9.5 million people, after official results from the presidential election on Aug. 9 gave Lukashenko a landslide victory over his widely popular opponent, Sviatlana Tsikhanouskaya. She and her supporters refused to recognize the result, saying the vote was riddled with fraud.

“Fasel is shaking hands and hugging with the dictator,” Tsikhanouskaya wrote on Twitter on Monday.

Authorities have cracked down hard on the largely peaceful demonstrations, the biggest of which attracted up to 200,000 people. Police have used stun grenades, tear gas and truncheons to disperse the rallies.