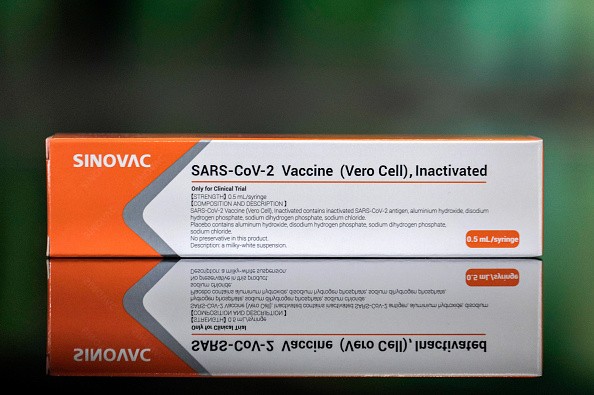 Last week, researchers at the Butantan Institute, which is carrying out trials in Brazil, announced that Sinovac's jab for the disease, CoronaVac, was 78 percent effective against "mild-to-severe" coronavirus cases. However, on Tuesday (Jan. 12), the São Paulo-based public institute revealed that it had failed to include "very mild infections" in its earlier calculations of those who had received the vaccine.

With the additional group included, the efficacy rate for the vaccine plummeted to 50.4 percent, just barely making the minimum 50 percent requirement set by the World Health Organization (WHO) for vaccines to be recommended for use.

In contrast, the Pfizer-BioNtech vaccine has an efficacy of 95 percent, the Moderna COVID-19 vaccine is rated at 94.5 percent, and the Oxford-Astrazeneca vaccine 73 percent for the first dose.

The results are a disappointment for Brazil, and the Butantan has been criticized for releasing data on the vaccine in a piecemeal fashion. Similar disjointed releases of data on various trial stages have been the hallmark of the Chinese-made vaccines and have raised questions as to whether they are being held to the same scientific standards and public scrutiny as Western vaccines.

The phase 3 clinical trial data was originally supposed to be released on Dec. 15, but it was postponed to Dec. 23, and then pushed off again for another 15 days. When the data finally came out on Jan. 7, the institute proudly proclaimed that it had achieved 78 percent efficacy.

In response, microbiologist Natalia Pasternak was cited by Reuters as saying, “We have a good vaccine. Not the best vaccine in the world. Not the ideal vaccine.” Brazilian President Jair Bolsonaro has been less than impressed with the vaccine "because of its origin," saying on Dec. 24 that "the efficacy of that vaccine of Sao Paulo seems to be very low," according to AP.

On Tuesday, the institute revealed that once "very mild infections" were included, the efficacy of the jab dropped down to 50.4 percent, reported the Financial Times. The 13,000 volunteers willing to try the jab is significantly lower than the 30,000 normally seen in phase 3 trials.

Different countries are reporting wildly differing results in their trials of CoronaVac, with Indonesia reporting an efficacy rate of 65 percent, but the trial only comprised of a mere 1,620 people, reported Japan Times. Turkey reported an even higher efficacy of 91.25 percent, but again, the sample size was quite small at 7,000 volunteers.

Meanwhile, questions of the safety of China's other widely trumpeted vaccine, Sinopharm's BBIBP-CorV, have intensified after the list of 73 adverse reactions was leaked on Jan. 4 by a Chinese vaccine expert. Some of its notable adverse effects include difficulty breathing, vision loss, acute allergic reaction, high blood pressure, delayed menstruation, palpitations, tremors, and esophageal disease, among others.

The head of Taiwan's Central Epidemic Command Center (CECC), Chen Shih-Chung (陳時中), in December of last year made it clear that Taiwan will not buy Chinese vaccines out of safety and regulatory concerns. In late November, he also vowed that when it comes to Western vaccines made in the communist country, "There is no way Taiwan would import vaccines made in China."