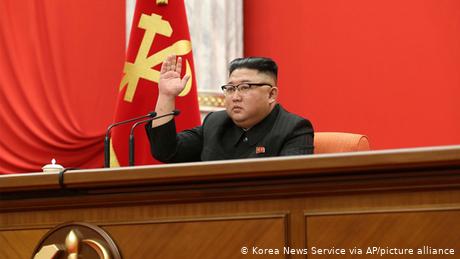 Pyongyang bestowed Kim Jong Un the title of general secretary of the ruling Workers' Party — a title formerly held by his late father and grandfather — and reconfirmed his leadership, state media reported this week.

The designation, in addition to his other titles of Chairman and Supreme Leader, was apparently aimed at boosting Kim's authority amid the country's economic challenges.

The announcement was made on Sunday during the Eighth Party Congress meeting in the capital — the first ruling party congress since 2016. Around 7,000 selected members of North Korea's nine-million-strong Workers Party have gathered in Pyongyang since January 5.

"Kim Jong Un's power has strengthened in the nine years that he has been in power since the sudden death of his father. This gives him the same status (as his father) … the dictatorship has been consolidated in form and title," Lee Seong-hyon from the South Korean think tank The Sejong Institute said.

North Korea has still not authorized access for foreign journalists to the congress and proceedings have been communicated through the release of video and still images on state media.

Among the notable personnel changes announced at the meeting on Monday was the name of Kim Jong Un's sister. Kim Yo Jong was missing from a new lineup for the party's Central Committee Politburo, where she had served as an alternate member since last year.

Previously, the influential sister had been ever-present at Kim's side for his landmark summits with Trump as well as at meetings with South Korean President Moon Jae-in.

But Kim Yo Jong retained her membership in the party's Central Committee, also a high-level body. It wasn't immediately clear why she lost her Politburo post. But she was seated with other politburo members directly behind her brother.

In speeches during the meeting, Kim addressed the North's adversarial relationship with Washington, labeling the US as the North's biggest and main enemy.

Kim was quoted by state media as saying, "The true nature of the US and its policy toward North Korea never changes." References were also made to the recent US presidential election, without naming the participants.

Daniel Bong from Yonsei University told DW that these comments are more like "standard operating procedures."

Lee said that the tactic of not naming Jo Biden "was a way of leaving open the possibility of negotiations and dialogue."

In remarks at the congress, Kim also reaffirmed North Korea's commitment to develop more sophisticated nuclear weapons, including missiles that could strike targets 15,000 kilometers (9,300 miles) away — putting Washington in range.

Since its first nuclear test in 2006, the North has been steadily developing its weapons program. Kim also mentioned the development of nuclear submarines and tactical nuclear weapons.

In early 2018, at his Singapore summit with US President Donald Trump, the leader agreed to suspend such tests as part of efforts to improve relations between Washington and Pyongyang. But at two subsequent summits between Kim and Trump, North Korea failed to secure meaningful concessions or sanctions relief and consequently did not abandon its nuclear ambitions.

Biden's election could renew hopes for Pyongyang of further negotiations between the two countries in the future. Biden, however, has criticized Kim's made-for-camera summits with Trump.

According to Lee, "Sending out a signal that there is still an opportunity for dialogue might help but is not guaranteed."

The North has been under the United Nations Security Sanctions list since its first nuclear test in 2006, severely impacting its economy. More recently, both the UN and the US slapped further sanctions as Pyongyang continued nuclear and long-range missile testing.