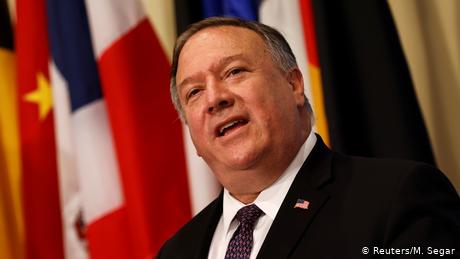 After US Secretary of State Mike Pompeo announced on Saturday that Washington would lift restrictions on official interactions between the US and Taiwan, the Chinese government sharply criticized the move, stressing that nobody could prevent China's "reunification."

Beijing views the self-governing democratic island of 23.6 million people as a renegade province and vows to reunify it with the mainland, even by force if necessary.

On Monday, China's Foreign Ministry strongly condemned Pompeo's announcement. "The Chinese people's resolve to defend our sovereignty and territorial integrity is unshakable and we will not permit any person or force to stop the process of China's reunification," said the ministry spokesperson Zhao Lijian.

Taiwan, meanwhile, has welcomed the news from Washington, with Foreign Minister Joseph Wu saying during a press conference that "Taiwan-US relations have been elevated to a global partnership" with this move. The Taiwanese government has also praised the US move as a sign of "global leadership."

While announcing his decision, Pompeo said the move is part of Washington's strategy to protect and preserve US interests in the face of challenges presented by the Chinese government.

On Monday, the US ambassador to the Netherlands hosted Taiwan's representative to the country at the US embassy, in the first publicly announced visit to a US government office since the restrictions were lifted.

Pete Hoekstra, the US ambassador, said on Twitter that Taiwan's representative to the country, Chen Hsing-hsing, had met with him at the embassy on Monday.

"Made some history today: Welcomed Taiwan Representative Chen to our Embassy," he wrote, including pictures of the two of them in the embassy building.

"Glad that our @StateDept colleagues around the world will now be able to host our friends from this vibrant democracy on our Embassy grounds."

Chen tweeted she was extremely pleased and honored to visit the embassy, saying it was "the very first time in my diplomatic career."

The United States, like most countries, has no formal diplomatic ties with Taiwan. However, it maintains unofficial contacts including a de facto embassy in Taipei, the capital, and supplies military equipment for the island's defense.

China has been angered by stepped-up US support for Taiwan over the past four years under President Donald Trump, including arms sales and visits to Taipei by senior US officials.

The US ambassador to the United Nations, Kelly Craft, is due to arrive in Taiwan on Wednesday for a three-day visit, which has also angered Beijing.

While the Taiwanese government applauded Pompeo's decision, some experts believe it may not have much impact on US-Taiwan relations. Bonnie Glaser, director of the China Power Project at the Center for Strategic and International Studies (CSIS) in Washington D.C., said the move may have come a bit too late.

"My first reaction was that it didn't seem terribly meaningful to be doing this so late in the administration," Glaser told DW. "They weren't doing it because they felt it's necessary to expand and promote the US-Taiwan relations. It seemed to aim at tying the hands of the Biden administration by trying to compel them to continue on the same path."

Lev Nachman, a PhD candidate focusing on Taiwan politics at the University of California, Irvine, says the US decision could also be interpreted as an attempt to fulfill the promise of more high-level diplomatic exchanges between the two sides, as envisioned in the Taipei Act and the Taiwan Travel Act.

"Pompeo's move could be seen as advancing what bipartisan Taiwan policies have been pushing for, which is more high-level diplomatic dialogue," Nachman told DW. "The problem is that with the Trump administration leaving office in ten days, the incoming administration is essentially free to approach US-Taiwan relations in the way it wants regardless of what Pompeo has done."

The Trump administration had long sought to scrap the restrictions, CSIS expert Glaser said, adding that the fact that Pompeo announced the decision ten days before he leaves office suggests that there may not have been a consensus among all government agencies.

"The language in the statement also suggests that there may be some opposition even within the State Department," said Glaser. "In many ways, I think the Trump administration is looking to use Taiwan as a weapon against China. We saw that with the way they announced Kelly Craft's visit to Taiwan. It was part of a statement condemning the Chinese government for arresting many pro-democracy politicians and activists in Hong Kong."

For the next US administration, Nachman believes, the move could pose a challenge, by forcing the incoming secretary of state, Anthony Blinken, to address the issue of Taiwan in the first few weeks of the new administration.

On Saturday, an official with the presidential transition team told Taiwan's Central News Agency that Biden believes US support for Taiwan must remain "strong, principled and bipartisan." The official said Biden will support "a peaceful resolution of cross-strait issues consistent with the wishes and best interests of the people of Taiwan."

Observers say Biden's response didn't reveal whether he supports or opposes the decision announced by Pompeo. But, they say, it would be difficult for Blinken to visibly reinstitute the old guidelines for official interaction between the US and Taiwan.

"It's very hard to predict how the Biden administration will carry out the new changes," Chieh-Ting Yeh, Vice Chairman of Global Taiwan Institute, a think tank based in Washington D.C., told DW. "It's possible that State Department officials remain cautious towards Taiwan, at least until there's more clarity from the top."