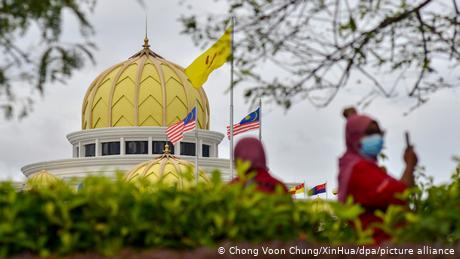 Malaysia's National Palace announced in a statement on Tuesday that King Sultan Abdullah Sultan Ahmad Shah had consented to a government proposal to impose a state of emergency to curb the spread of coronavirus.

In a televised address, Malaysian Prime Minister Muhyiddin Yassin said Parliament would be suspended and elections would not be held during the emergency, which could last until August 1.

"Let me assure you, the civilian government will continue to function," Muhyiddin said, seeking to dispel alarm about the measures. "The emergency proclaimed by the king is not a military coup and a curfew will not be enforced."

In the address, Muhyiddin committed to elections being held when it was safe to do so. A local election last year has been blamed for starting a wave of infections that spread across the country.

The declaration should temporarily ease a degree of political uncertainty hovering over Muhyiddin, who came to power in March with an alliance that had a razor-thin majority.

The decision follows threats by the United Malays National Organization, the largest party in the ruling coalition, to withdraw support and bring about an early general election.

Members of the opposition have interpreted the emergency declaration as a bid by an unpopular administration to hold onto power and avoid a snap election.

What the PM's opponents are saying

The Pact of Hope opposition alliance said the emergency declaration was unacceptable, adding that a partial lockdown announced earlier in the week was enough to tackle the virus.

"The emergency powers give the prime minister absolute power to do anything he wishes," the pact's leaders said in a statement that addressed Muhyiddin directly. "Do not hide behind the coronavirus and burden the people by declaring an emergency in a bid to save yourself," the pact said.

A joint statement by activist groups and nongovernmental organizations said the emergency declaration appeared more aimed at halting the collapse of Muhyiddin's government than dealing with the COVID-19 pandemic.

"If this is the true underlying reason, the declaration of a national emergency is not only an overkill but an abuse of executive power that places the country at great peril," the statement read.

The Malaysian Health Ministry reported almost 4,000 new cases of COVID-19 on Tuesday, the third day since January 6 that a new daily record has been set.

The new cases took the total since the outbreak began to more than 141,000, with 30,390 cases listed as "active." The related death toll is relatively low, with the four new fatalities on Tuesday bringing the total fatalities to 559.