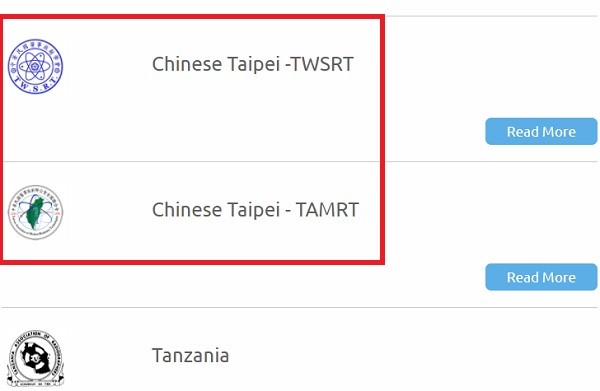 TAIPEI (Taiwan News) — As the global death toll from the Wuhan coronavirus nears 2 million, two Taiwanese radiological groups have been forced to change their names to "Chinese Taipei" in an international medical society following pressure from the World Health Organization (WHO).

On Dec. 23, the TWSRT and TAMRT posted a letter online that they had received from the ISRRT the previous day. The letter stated that in order for the ISRRT to maintain its "Official Relations" status as a non-state actor with the WHO, it must comply with that organization's rules and regulations.

The ISRRT stated that it had received letters in June and December from the WHO complaining that the naming convention used by the ISRRT's website and materials "do not appear consistent with WHO's policies and practices." The global health organization then demanded that the ISRRT change any references to Taiwan to "Taiwan, China."

The ISRRT claimed that this was a "hard decision" but suggested that a "solution" would be to change the membership names of "Taiwan-TWSRT" and "Taiwan-TAMRT" to "Chinese-Taipei TWSRT" and "Chinese Taipei-TAMRT." The organization noted that this is similar to the name Taiwan uses in the Olympic ceremony and games.

In a joint statement issued on Dec. 23 on the TWSRT website and TAMRT Facebook page, the two organizations announced that they are protesting the change. They vowed to continue to work with the Taiwanese government on having the name change request rescinded.

They called on all their members to continue to fulfill their duties and excel in their professions to show the world that "Taiwan can Help!" The two groups pledged to handle political matters while encouraging members to focus on "shining through their hard work."

In response, Foreign Ministry Spokesperson Joanne Ou (歐江安) on Monday (Jan. 11) stated: "In order to safeguard the dignity and interests of Taiwanese groups participating in international affairs, the Ministry of Foreign Affairs has instructed its representative in the U.K., which is where the headquarters of the ISRRT is located, to urge the ISRRT to restore the classification of Taiwan for the two medical organizations on its official website."