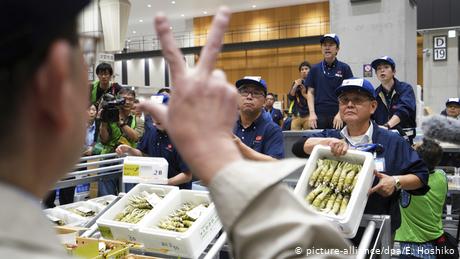 Anyone who has consumed too much wasabi in one mouthful will be aware of the impact that it has on the senses. The eyes water, the nose burns, and the mouth and throat are fiery with every inhalation. Despite its pungent reputation, which has usually seen this classic Japanese ingredient paired with sushi or sashimi, experts say it is far more versatile and can be used more subtly in other dishes, ranging from bowls of noodles to grilled eel — and even incorporated into ice cream, wine and beer.

Wasabi is a member of the horseradish and mustard group of plants and has traditionally grown in naturally occurring streams in mountainous regions of Japan. Records indicate that it was first cultivated as far back as the 8th century, although it only became widely known outside of Japan when sushi began to take off internationally as a cuisine in the early 1980s.

From medicine to food

"Wasabi started out being used in early medicines in Japan, with people in the countryside aware centuries ago of its antibacterial and antiseptic properties," said David Hulme, an Australian who has taken over a number of small wasabi patches in the valleys in Okutama, to the west of Tokyo.

"At that time, most fish was dried, but as soon as sashimi became a cuisine, people experimented and they realized that it went very well with wasabi," he told DW.

Raw fish, in all its forms, has arguably been Japan's greatest culinary export, and restaurants serving sushi and sashimi can be found from Berlin to Bangkok and Boston. And for foreigner palates, they are naturally accompanied by wasabi. But in Japan, wasabi goes with many more dishes.

A cone of green wasabi is often found on a small plate alongside a bowl of soba noodles, with the diner putting as much — or as little — as required into the broth and swirling it together. It is served with "yakiniku" grilled meat and "unagi," seared eel that is a delicacy in the hot days of late summer. A small amount adds some zing to "chazuke," made by pouring hot water over cooked rice and topped with pickles, seaweed, fish or grated vegetables.

Hulme says his favorite use of wasabi is with sashimi, and he cautions that genuine wasabi is both expensive and not always what is served up in restaurants.

"Real wasabi has to be ground so the chemical components can bond together to give it that distinctive taste," he said. "After it has been freshly ground, you must wait for between one and three minutes for the peak experience, but after that the pungency and flavor begin to dissipate. And after 15 minutes, there is very little flavor left at all."

To meet demand for wasabi, food manufacturers now produce an artificial condiment that is primarily made of horseradish and pepper with a green dye and is sold in a tube.

Part of the problem, Hulme added, is that growing wasabi is a physically demanding process, and the plant requires optimum conditions to thrive. The plants do not like direct sunlight, need an air temperature ideally between 8 degrees and 20 degrees Celsius, and like high humidity in the summer months.

"A lot of the wasabi farmers are getting older now, they are getting frail, and there is no one to take over from them when they retire because it is such labor-intensive work," he said.

"And the elements in the last couple of years have also been against us, with the massive snowfalls of 2014 knocking out some farmers, and then last year's typhoons putting more out of business."

With wasabi something of a national obsession, the largest specialist grower in the country has turned its farm into a tourist attraction. The Daio Wasabi Farm is on the outskirts of the city of Hotaka in Nagano Prefecture, northern Japan, and originally opened in 1915, although the on-site restaurant has had to shut down for the duration of the coronavirus pandemic.

"I would say that the wasabi flavor soft ice cream is one of our best-selling products, especially in the summer months," said Mitsuo Taiyo, a spokesman for the Daio Wasabi Farm. "A lot of people are a bit nervous at first, but it's a very gentle wasabi flavor and they all like it."

The restaurant usually serves a number of wasabi-themed meals, including soba noodles that have wasabi in the wheat, and wasabi "tempura" of deep-fried prawns and vegetables, while the farm shop does a steady trade in both wine with a hint of wasabi and beer infused with the flavor.

"I think that most Japanese people like the flavor of wasabi because it adds something special to the food," Taiyo told DW. "And there is certainly an argument for wasabi being the official taste of Japan."