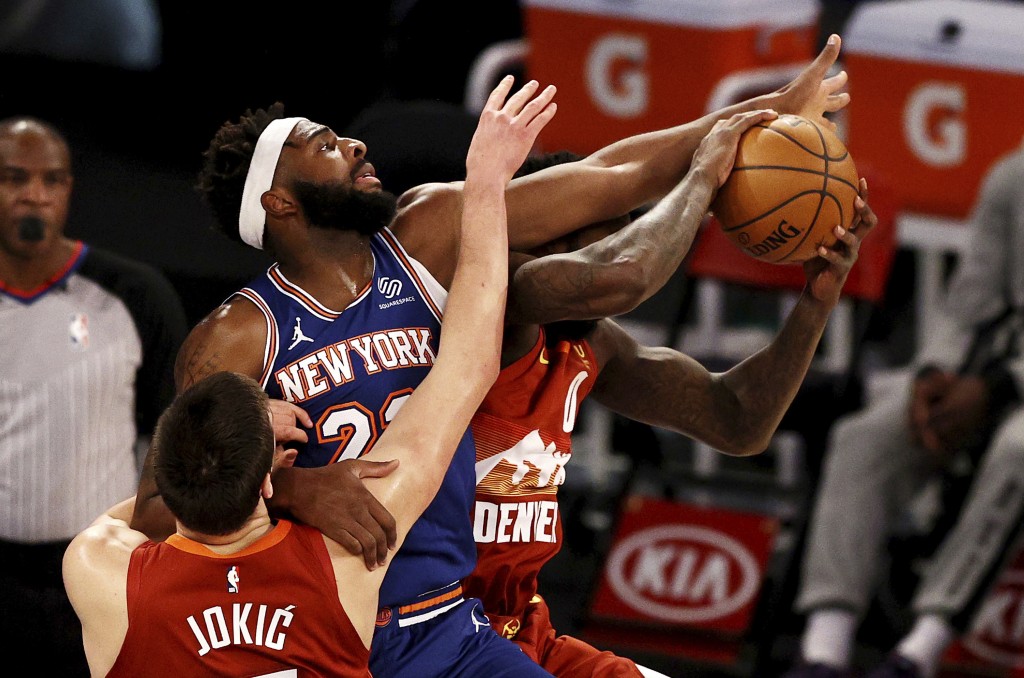 NEW YORK (AP) — Nikola Jokic had 22 points, 10 rebounds and five assists in another short night, and the Denver Nuggets reached .500 for the first time this season with a 114-89 victory over the New York Knicks on Sunday.

The Nuggets opened 1-4 after reaching the Western Conference finals last season but have now answered with four wins in five games.

The last two were easy. The Nuggets pulled away from the seven-man 76ers in the third quarter and rested their starters in the fourth of a 115-103 victory Saturday. They jumped on the Knicks much earlier Sunday and it was never a game after halftime.

Gary Harris added 14 points for the Nuggets, who got only nine from star guard Jamal Murray.

Julius Randle had 29 points, 10 rebounds and five assists for the Knicks, which the team said made him the only player other than Hall of Famer Oscar Robertson to have at least 200 points, 115 rebounds and 70 assists in his team’s first 10 games of a season.

But Randle had little help with nobody else over 12 points as the Knicks dropped their second straight following a three-game winning streak. They were held to an anemic 89 points in both games.

Denver led 28-21 after one, then made its first six shots of the second to open a 40-22 lead on JaMychal Green's layup. The lead ballooned to 22 late in the first half before the Nuggets took a 59-38 advantage to the break.

Jokic had eight points while playing the whole third quarter and the Nuggets led by as much as 30 in the fourth.

Nuggets: Denver has won 19 of the last 24 meetings. ... Monte Morris and PJ Dozier both scored 12 points.

Knicks: Coach Tom Thibodeau said rookie Obi Toppin, limited to one game thus far because of a strained right calf, is making steady progress but still not cleared for anything except individual work. Frank Ntilikina (sprained right knee) is probably out another week before a further update.

“We had a lot of guys and so I think we all learned from each other,” Thibodeau said, “and that was the best part of that staff, is you felt like you were going to the best clinic in the world every day.”

Malone recalled when the demanding Thibodeau got to coach the Knicks' entrant in the former Boston summer league.

“I remember Don Chaney would have ice bags on after practice because Thibs’ summer league practices were like five hours long,” Malone said.