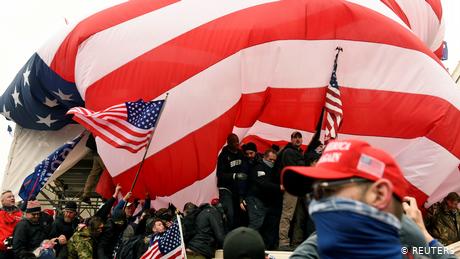 The state-controlled Chinese newspaper Global Times pinned the video to the top of its Twitter feed — to ensure as many users as possible saw its message: A collage of images from the storming of the US Congress combined with images from the storming of the Legislative Council in Hong Kong during the July 2019 democracy protests, along with the message: "Facing similar scenes, US politicians and media speak different words." Editor-in-Chief Hu Xijin criticized a "bizarre double standard" and demanded: "Condemn all violent activities that are illegal."

On the tightly censored Chinese social media platforms, many users were rejoicing over the rioting on Capitol Hill. The violent scenes were a "beautiful sight," some wrote — an ironic reference to a statement allegedly made by the Speaker of the US House of Representatives, Nancy Pelosi, about Hong Kong in June 2019.

In fact, Pelosi's remark was describing a candlelight vigil commemorating the anniversary of the 1989 Tiananmen Square crackdown and not — as repeatedly incorrectly reported by Chinese media — the destructive behavior of Hong Kong protesters. Tweets on the Chinese platform Weibo complaining about the double standards of Western countries and drawing parallels between what happened in Washington and Hong Kong received thousands of likes.

Whether the demonstrators in Hong Kong did themselves a favor with the pictures that went around the world after the storming of the Legislative Council in Hong Kong is something on which opinions may differ. And those differing opinions, by the way, could be read in the Western media — in contrast to the Chinese media controlled by the Communist Party, which deliberately showed the protests in Hong Kong in a one-sided way: as nothing but chaos. But more importantly, what happened in Washington and in Hong Kong was completely different.

In Hong Kong, people took to the streets because their freedoms were being increasingly curtailed. The independent judiciary was undermined, the freedom of press and expression were increasingly being eroded, and democratic participation was de facto abolished.

Last Wednesday, more than 50 former parliamentarians, activists and district council members were arrested in Hong Kong. Their "crime" was that they had taken part in a primary election in order to campaign for their interests in parliament by peaceful, democratic means.

In Washington, on the other hand, a group of people tried to storm Capitol Hill to overturn the results of a presidential election that had been declared free and fair. Either because they lived in an information bubble so that fact-based news had long since ceased to reach them or because they were simply not ready to accept that they had lost.

Double standards? A comparison between the scenes in Washington and those in Hong Kong? Absurd.