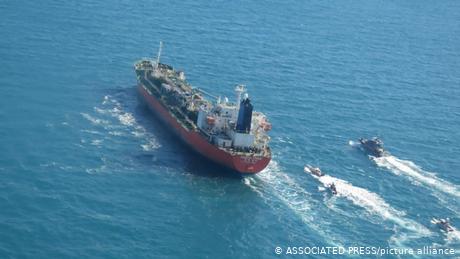 A South Korean delegation left for Iran on Thursday to negotiate the early release of an oil tanker and its crew seized in strategic Gulf waters this week.

Iran's Revolutionary Guard Corps troops on Monday stormed the South Korean-flagged MT Hankuk Chemi as it navigated the Strait of Hormuz, a narrow waterway between the Persian Gulf and the Gulf of Oman, and forced the vessel to a nearby Iranian port.

Iranian officials said the vessel was seized for violating maritime environmental laws as it was carrying 7,200 tons of "oil chemical products."

The Guards said the arrested crew were from South Korea, Indonesia, Vietnam and Myanmar.

"I plan to meet my counterpart at the Iranian Foreign Ministry and will meet others through various routes if it will help efforts to resolve the issue of the ship's seizure," Koh Kyung-sok, the chief delegate and the director-general of the South Korean Foreign Ministry's Middle Eastern affairs department, was quoted as saying before boarding the plane to Tehran.

Tensions spiral in the Gulf

Iran's seizure of the tanker came after Tehran had urged Seoul to release the $7 billion (€5.7 billion) of Iranian assets frozen in South Korea under US sanctions.

The money was frozen in South Korean banks after President Donald Trump withdrew the US from a multilateral agreement which limited Tehran's nuclear enrichment activities in exchange for a relaxation of international economic and financial sanctions.

The US had initially provided South Korea with a waiver to avoid implementing the new sanctions, but those lapsed, essentially forcing Seoul to freeze the Iranian assets.

Iran's move to seize the vessel also coincides with Tehran's announcement that it will increase the level of uranium enrichment at its Fordo nuclear facility to 20%, well above that agreed to with several countries, including the US, until Trump's withdrawal from the deal in 2018. Uranium enriched to 90% is required to fuel nuclear weapons. Iran claims its nuclear program is strictly for peaceful purposes.

Meanwhile, January 2 marked the one-year anniversary of the assassination of General Qassem Suleimani, commander of the Iranian Revolutionary Guard Corps' elite Quds Force, in a US drone attack.

Tension between the Islamic Republic and the United States has been running high in recent weeks, as Tehran marked the assassination, and Washington deployed military assets to the region, including the return of the nuclear-powered aircraft carrier USS Nimitz and repeated sorties of pairs of strategic B-52 bombers over the Persian Gulf.

Concerns over the potential for a military confrontation between the US and Iran have been voiced from several quarters over the past few weeks. President Trump threatened Iran over a rocket attack by Tehran-backed Iraqi militants near the US Embassy in Baghdad on Christmas Eve.

Iran has responded to the US military moves, with its Foreign Minister Mohammad Javad Zarif accusing Trump of manufacturing a pretext to attack Iran in the waning hours of his administration.

All this adds up to a lot of moving parts and a lot of uncertainty, says Cheong Wook-sik of the South Korean NGO PeaceNetwork. Like most observers, Cheong places little credence on the validity of Iran's "pollution" justification for seizing the oil tanker.

He suggests the move is more likely designed to generate leverage over the US in terms of a potential return to the Iranian nuclear agreement (formally called the Joint Comprehensive Plan of Action or JCPOA), initially negotiated when incoming US President Joe Biden was vice-president, and a supporter of the deal concluded under President Barack Obama.

"For South Korea to release the $7 billion in Iranian funds held in South Korean banks it would require some type of waiver from implementing the US sanctions, or for the US to return to the JCPOA," Cheong told DW, adding: "The Iranian government also hopes the South Korean government will ask the new incoming Biden administration to lift the economic sanctions against Iran."

Although there is significant concern frequently voiced in the public sphere over the potential for Trump to initiate a crisis in his last days in office, the incoming Biden administration provides hope for a significant drawdown of tension, said Cheong.

Changes in US policy will be required, he pointed out.

"In order to revive the Iranian nuclear deal, the United States, especially the new administration, should lift economic sanctions and return to the Iranian nuclear deal. At the same time, Iran should stop the enrichment of uranium fuel to 20% at the Fordo facilities," he said. "These two things should be done simultaneously. If so, the Iranian frozen assets issue can be resolved, and the seized South Korean ship returned."

South Korea may represent a perfect intermediary between the US and Iran. South Korea had imported a significant portion of its oil from Iran prior to United Nations Security Council sanctions imposed before negotiating the JCPOA deal. Also, historically, Seoul has had good diplomatic relations with Tehran for decades. Cheong views the ship seizure very much through the lens of geopolitical strategy.

Still, the risk of a military flare-up is there. The seizure, the enrichment and the anniversary, says Cheong, "can trigger reactions from Israel and the United States."

Israeli Prime Minister Netanyahu has argued for a strike against Iranian nuclear facilities, suggesting the increase in enrichment provides evidence Iran is seeking nukes, and not nuclear fuel for peaceful purposes.

Although South Korea said it is committed to resolving the ship seizure issue diplomatically, that resolution will likely require the involvement of Washington and the next US administration.

"I hope that the Biden team sends some message — officially or unofficially — after its inauguration on January 20 … to seek dialogue with the Iranian government for resolving the current issues peacefully, such a message would weaken the hardliners in Iran, Israel and the United States and strengthen the doves," said the PeaceNetwork director.