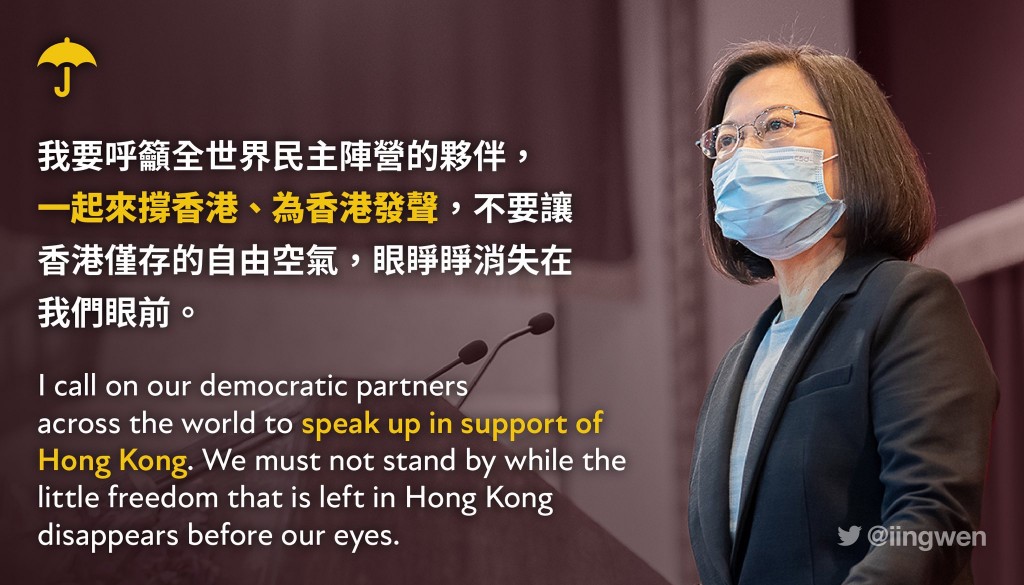 TAIPEI (Taiwan News) — Taiwan President Tsai Ing-wen (蔡英文) on Wednesday (Jan. 6) condemned the arrest of over 50 pro-democracy activists in Hong Kong and called on the world's democracies to speak out against China's political repression in the territory.

On Wednesday evening, Tsai posted a tweet in which she described the act as a "blow to freedom in Hong Kong." She vowed that Taiwan will "continue to resolutely support a free Hong Kong & stand up for our shared democratic values."

She included an image of a yellow umbrella, symbolizing the Umbrella Movement during the Hong Kong democracy protests of 2014. In both Chinese and English, Tsai called on democratic nations across the globe to "speak up in support of Hong Kong."

Tsai urged democratic countries not to stand idly by while the last vestiges of freedom in Hong Kong disappear.

Also on Wednesday, Taiwan's Foreign Minister Joseph Wu (吳釗燮) on Twitter described the arrests in Hong Kong as a "deep shock to those who treasure freedom." He expressed strong condemnation of the mass arrests and pledged that Taiwan will continue to advocate for the rights of the pro-democracy activists.

Wu called on the world to "unite against authoritarianism." He then emphasized that when it comes to taking a stand on Hong Kong, there is "no more room for ambiguity."

This morning more than 50 democratic activists were arrested, in the latest blow to freedom in #HongKong. #Taiwan will continue to resolutely support a free Hong Kong & stand up for our shared democratic values. pic.twitter.com/H5v8ji2Q4r

The mass arrest in #HongKong comes as a deep shock to those who treasure freedom. In #Taiwan, we strongly condemn the act & will continue speaking out for the rights of the democracy advocates. The free world must unite against authoritarianism: No more room for ambiguity! JW https://t.co/ZxXEeZ2ef1