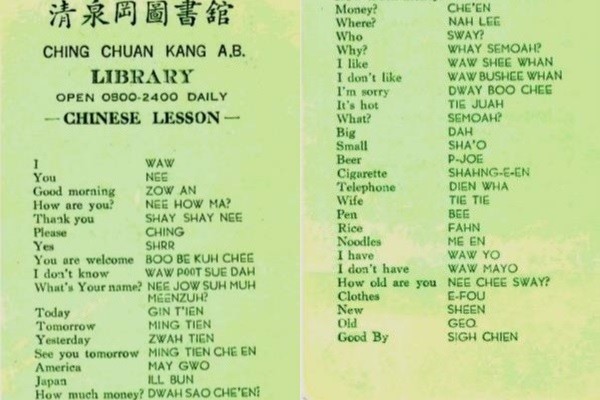 TAIPEI (Taiwan News) — On Sunday (Jan. 3) survival Mandarin lessons for U.S. troops stationed in Taiwan in the 1960s suddenly went viral because of their down-to-earth approach to pronouncing the language.

On Sunday, an image showing a basic Mandarin lesson for U.S. airmen stationed at Taichung's Ching Chuan Kang Air Base was shared on the Facebook group Taiwan History and was posted the next day on the Taiwan subreddit for the social media site Reddit. The lessons were originally posted in the base's library, and an image of the manual was included in a collection of photos uploaded onto a webpage titled "U.S. Military Ching Chuan Kang Base Footprints Museum," which is part of the Republic of China Air Force website.

According to the website, the U.S. Air Force (USAF) was stationed at the base from 1963 to 1979, when former President Jimmy Carter severed U.S. diplomatic ties with Taiwan. The 16 years that the USAF occupied the facility marked the longest period a U.S. military unit had occupied any base in Taiwan.

In 2010, the Taiwan Air Force began to gather artifacts from the U.S. presence to build a museum on the site of the base's church. On Jan. 12, 2011, the museum was officially opened to commemorate the 58th anniversary of the establishment of cooperation between the U.S. and Taiwanese air forces at the base.

Instead of the Wade Giles or Yale romanization systems that were common at the time, the staff at the base library used their own eccentric approach to teaching Mandarin pronunciation to U.S. soldiers. One of the first spellings that jumped out to a lot of netizens was the spelling "shay shay nee" to pronounce "thank you" (xiexie, 謝謝). Another interesting one is depicting "yes" as "shrr" (shi, 是) with a strong Beijing twang and no vowels.

Some found the interpretation of "You are welcome" as "boo be kuh chee" amusing and perplexing. It appears that instead of the more common "bu keqi" (don't be polite, 不客氣), they appear to have been aiming at the lesser-used "bu bi keqi" (no need to be polite, 不必客氣).

The spelling for "why" as "whay semoah," reveals that the author has a Taiwanese Mandarin accent with the "h" in "weishenme" (為什麼) silent. The greatest mystery on the chart is the decision to spell "it's hot" as "tie juah," with the debate among netizens raging over whether it's an attempt at the Mandarin "tai re" (太熱) or a hybrid of Mandarin and Taiwanese Hokkien "tai juah."

Some spellings were right on the money, such as "p-joe" for "beer" (pijiu, 啤酒), while others sound exactly like a stereotypical Mandarin 101 student from the U.S., such as "may gwo" for "America" (meiguo, 美國) and "dway boo chee" for "sorry" (duibuqi, 對不起). Some commenters visualized Aldo Raine from the movie "Inglourious Basterds" trying to pronounce the words with his hillbilly Tennessee accent.