The event, known as “Amiyan” in the local language, kicked off Friday at 10 a.m. at the Peinan Cultural Park, with approximately 200 villagers congregating in the park’s open field. According to Adalia Chang (張靜怡), a Puyuma resident, the attendees divide themselves into four groups based on family and clan affiliations.

All the men were dressed in traditional red-and-black garb, while the women and girls wore blue-and-black outfits. Only the boys donned blue shorts.

If a member in one of the four groups had passed away during the year, the group would not be allowed to wear their traditional clothing until the first day of the new year, Chang said. Throughout the venue, people could be seen wearing vibrant floral head wreaths made out of common gypsophila, great bougainvillea, Mexican marigold, chrysanthemums, and geranium aralia.

A traditional “Trakuban,” essentially a large raised house made of bamboo and palm leaves that serves as a political and educational center for males, could be seen in the background. Women are not allowed to enter. Up until their early 20s, Puyuma boys, instructed by male village elders, train in the mountains to learn basic survival skills and traditional customs that all Pinuyumayan men must know. Friday’s activity marked the culmination of their education and entry into manhood.

Chang stated that boys aged 12-18 receive lessons in etiquette and courage. After 18, they receive more rigorous training before they are eligible to get married and enter manhood.

The day began with the newly initiated men jogging down from the mountain in brand new traditional red pants, which are hand-stitched and take a year to make. Families gathered on both sides of the path, cheering them on as they made their way down single-file. Many women were seen handing out betelnuts and candy.

Chang said that in between each group would be a few male elders, symbolizing respect and protection. At various times, the groups would slowly run in a circle, chanting and shouting to express their excitement over such a significant moment in their lives.

The men eventually gathered at a special cordoned-off section of the park where a simple bamboo structure adorned with small, colorful flags was erected as a triumphal arch (凱旋門). There, they began to sing traditional Pinuyumayan songs and dance, holding hands, in a counter-clockwise spiral formation. During this time, the families had a leisurely picnic lunch, enjoying each other’s company. In the afternoon, the men jogged on to the Puyuma Traditional Cultural Activity Center nearby.

Along the way, families lined the streets and set off a barrage of fireworks as the men slowly reached the activity center, where they continued dancing — this time accompanied by younger boys.

All of the boys were noticeably shirtless, which Chang explained was meant to expose them to the cold as a step towards true manhood. Village elders sat in the middle of the spiral, leading the group in song. After some time, everyone was welcome to join the men in dance.

The real festivities came during dinner time, when families gather together. At the Chang residence, there was an extravagant feast, and everyone flocked around the karaoke machine they had rented specifically for this occasion. As this day coincided with New Year’s Eve, it was a compound celebration.

The last part of the coming-of-age ceremony did not take place until nighttime, long after the final countdown into the new year had come and gone. This activity, called Baojiayin (報佳音) in Mandarin, requires the Puyuma men to go from house to house ripping the first page from calendars while singing songs and greeting each family.

At the Chang household, this did not happen until 2 a.m. on Jan. 1. Only after a visit from a group of rowdy Puyuma men was it time to head to bed.

Though Chang noted that this year’s ceremony had fewer attendees due to the drastic drop in temperature, she said that there are usually more than 200 each year. She told Taiwan News that she makes it a point to return to this event, as she feels it is important to carry on Pinuyumayan customs.

She added that the tribe’s youth receive government-approved paid days off from work to come home for this ceremony, which facilitates better cultural preservation.

Chang also mentioned that each Pinuyumayan village has its own distinct variation of the coming-of-age ceremony. For example, the Kasavakan village holds its ceremony on New Year’s Day, and it features a thorny-vine peeling contest and a large swing made of bamboo and vines.

Furthermore, the traditional Kasavakan garb differs from Puyuma's in color and design. Some Kasavakan females even sported Japanese kimonos, possibly a vestige of Japanese colonial rule.

Chang said that the Pinuyumayan hold the women’s coming-of-age ceremony in March. The Pinuyumayan previously did not have a collective name for all the separate villages. As a result, Puyuma, the largest of the villages, was chosen to refer to the tribe as a whole, and it is still a generally accepted term for this ethnic group, according to the Digital Museum of Taiwan Indigenous Peoples (DMTIP).

Currently, the tribe, a matrilineal society, is involved in many cultural exchanges with other indigenous peoples around the world. Adalia Chang’s sister Guguy (張靜婷) told Taiwan News that she had recently taken part in a program that took her and another Pinuyumayan, along with a large group of Taiwanese indigenous college students to Florida and Hawaii, where they met with local indigenous youth.

She said that she was particularly emotional when she set foot on sacred sites in Hawaii, as the island state is known for its Polynesian heritage. Given the wide acceptance of the “Out of Taiwan” theory, Guguy said that meeting local people there was akin to meeting distant relatives and that it was an unforgettable experience.

The "Out of Taiwan" theory, first introduced by archaeologist Peter Bellwood in 1983, argues that Taiwan is the ancestral homeland of modern-day Polynesian peoples. Over thousands of years, Austronesians migrated from Taiwan towards islands in Southeast Asia and the Pacific Ocean, traveling over vast stretches of water. Indigenous groups from the Philippines, Malaysia, Indonesia, Samoa, Tonga, New Zealand, and many other islands in the Pacific claim to be descendants of the Austronesians.

The Pinuyumayan are spread out, living from the western foothills of Taitung's Luye Plateau to the muddy plains in the southern part of the eastern Taiwan Valley, according to the DMTIP. They number approximately 14,510 in total.

For more information about the tribe, please click here. 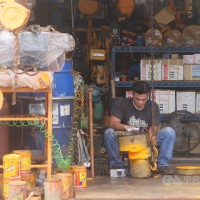