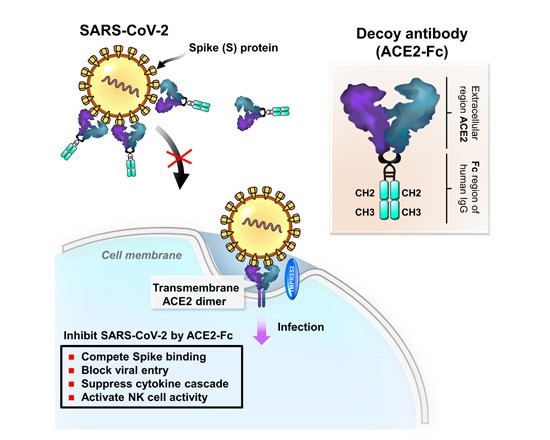 TAIPEI (Taiwan News) — Taiwanese scientists have developed a decoy antibody that can prevent infection by the Wuhan coronavirus by blocking it from entering human cells.

On Nov. 30, scientists from Academia Sinica and National Taiwan University published a peer-reviewed article in EMBO Molecular Medicine titled "Humanized COVID‐19 decoy antibody effectively blocks viral entry and prevents SARS‐CoV‐2 infection." In the report, the scientists describe how they have created a decoy antibody that binds to the SARS-CoV-2 spike protein to prevent it from infecting human cells.

In addition, after the decoy has bound to the spike proteins, the ACE2‐Fc activates the degranulation of natural killer (NK) cells. The decoys were found to be effective at blocking the entry of six clinical isolates, including the highly infectious D614G strains of the virus.

The scientists concluded that the decoy could serve as a therapeutic agent to suppress an inflammatory cytokine storm after infection. Animal experiments are being planned and will include the mutant strain of the virus recently discovered in the U.K., B.1.1.7, after it has been isolated from samples collected from patients in Taiwan.

Chang Sui-yuan (張淑媛), a professor in the Department of Clinical Laboratory Sciences and Medical Biotechnology at the National Taiwan University College of Medicine, was cited by Liberty Times as saying that it is unknown whether the infectivity of the strain found in the U.K. exceeds that of D614G but expressed confidence that the decoy antibody would be able to block it as well.