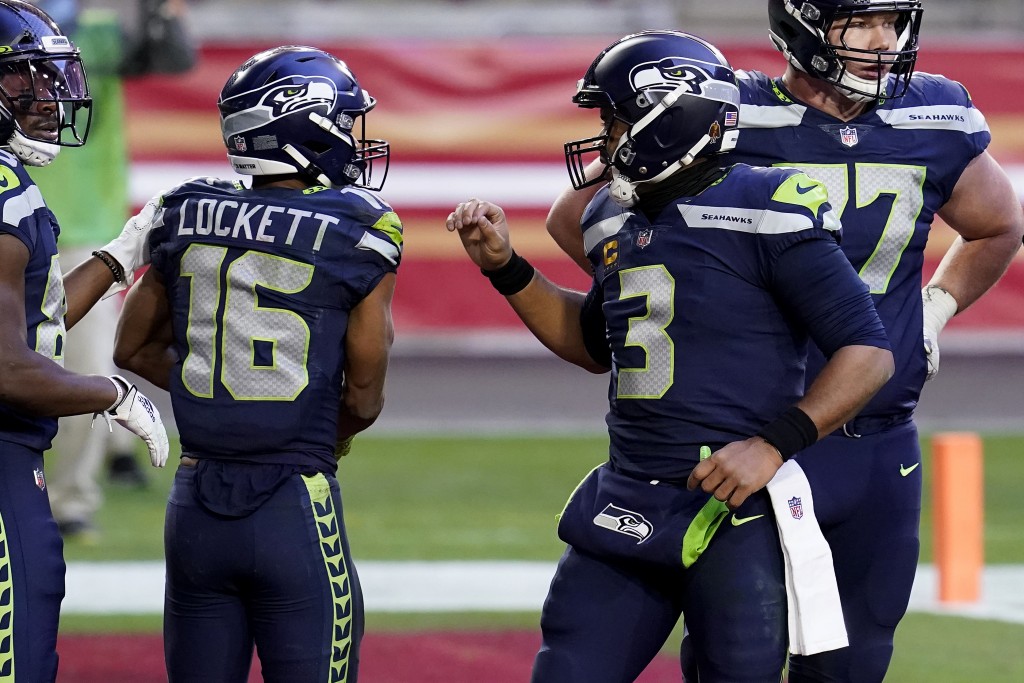 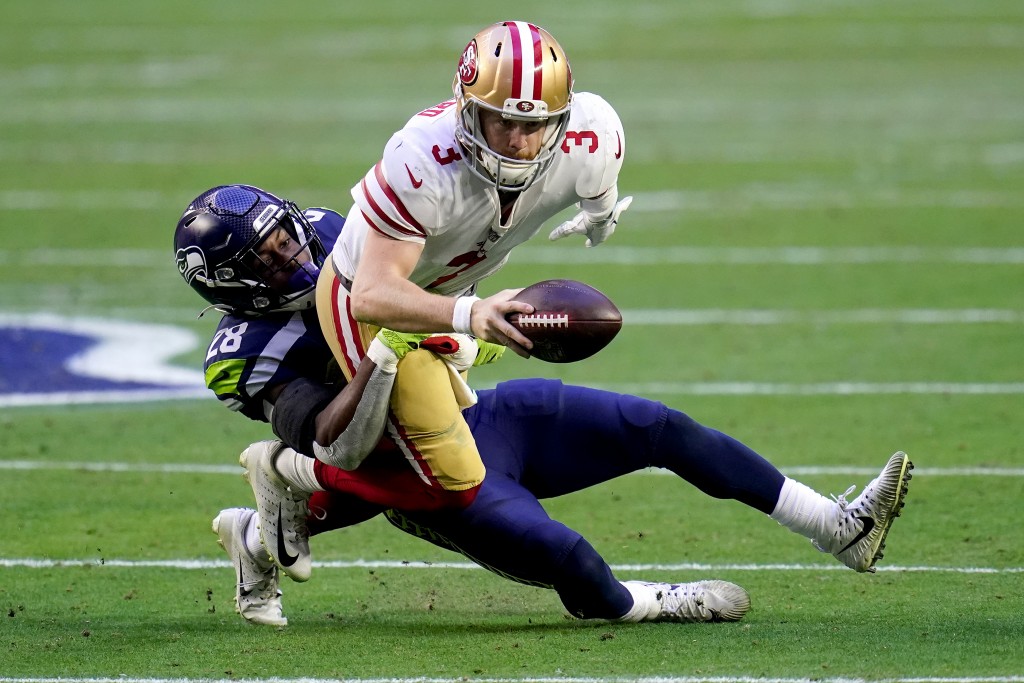 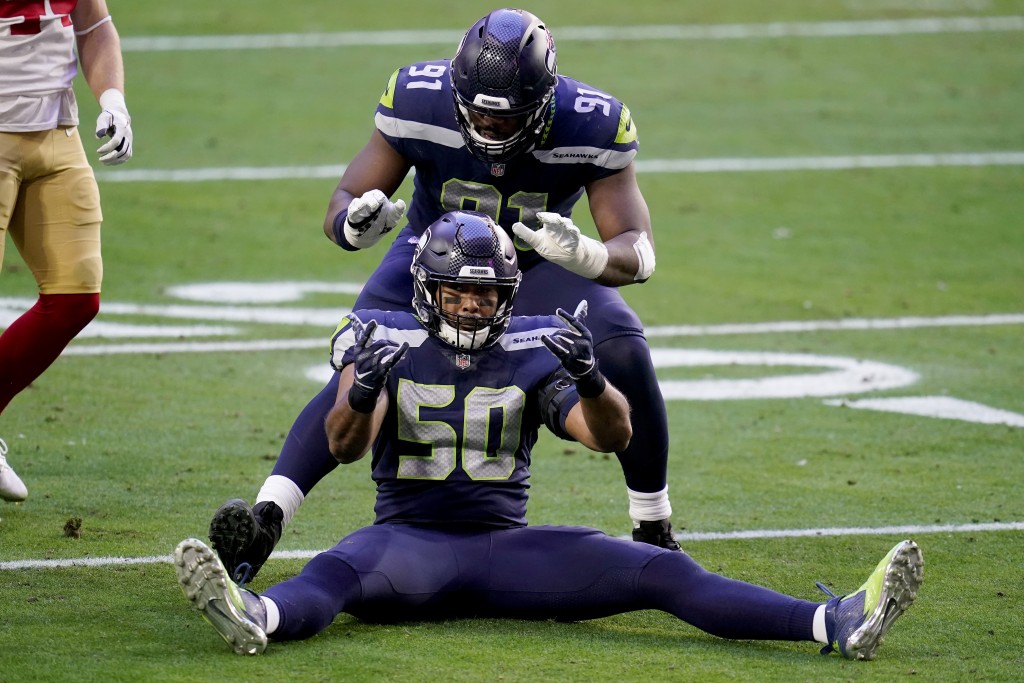 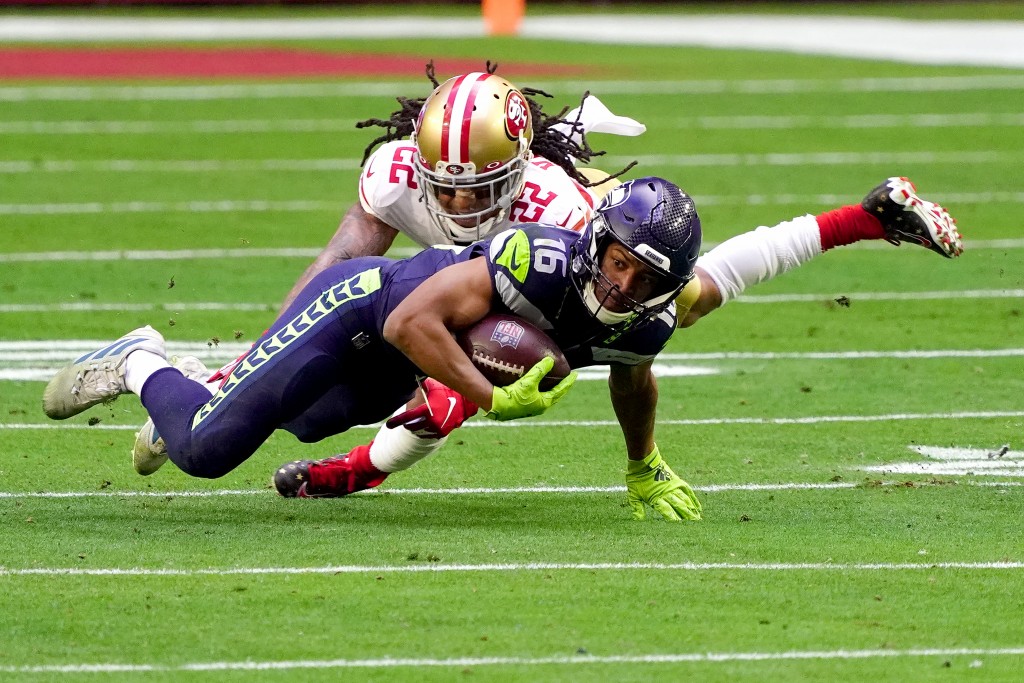 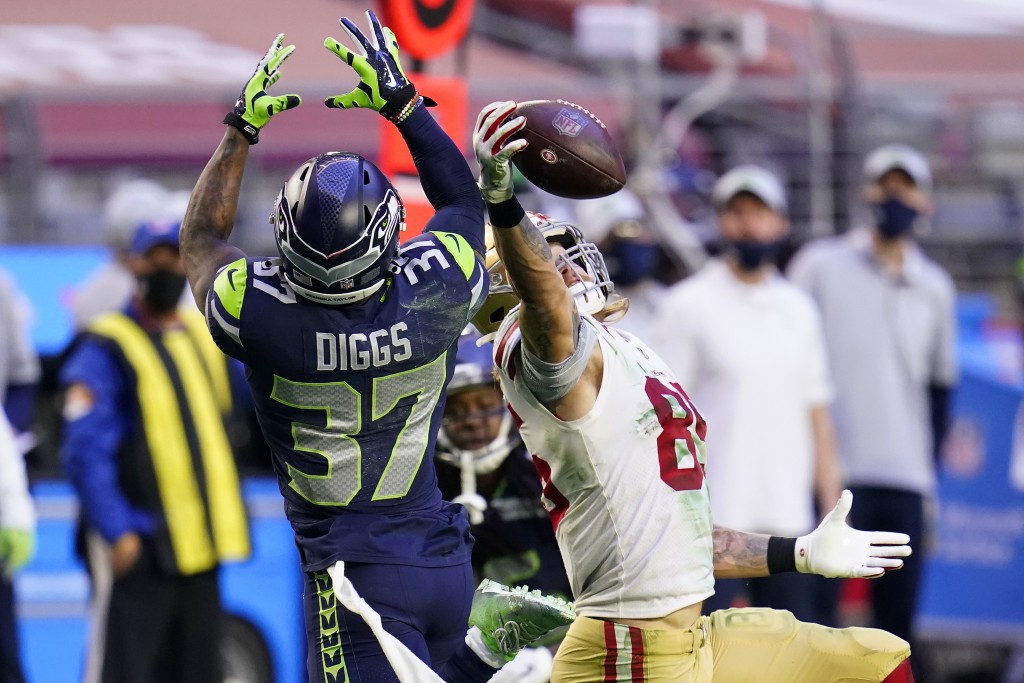 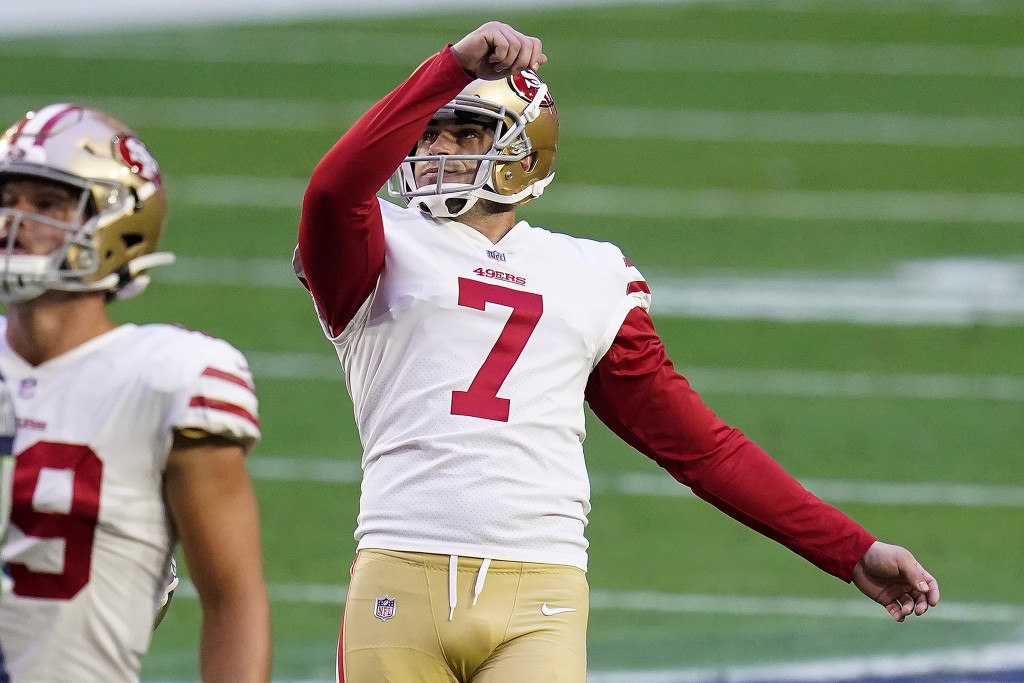 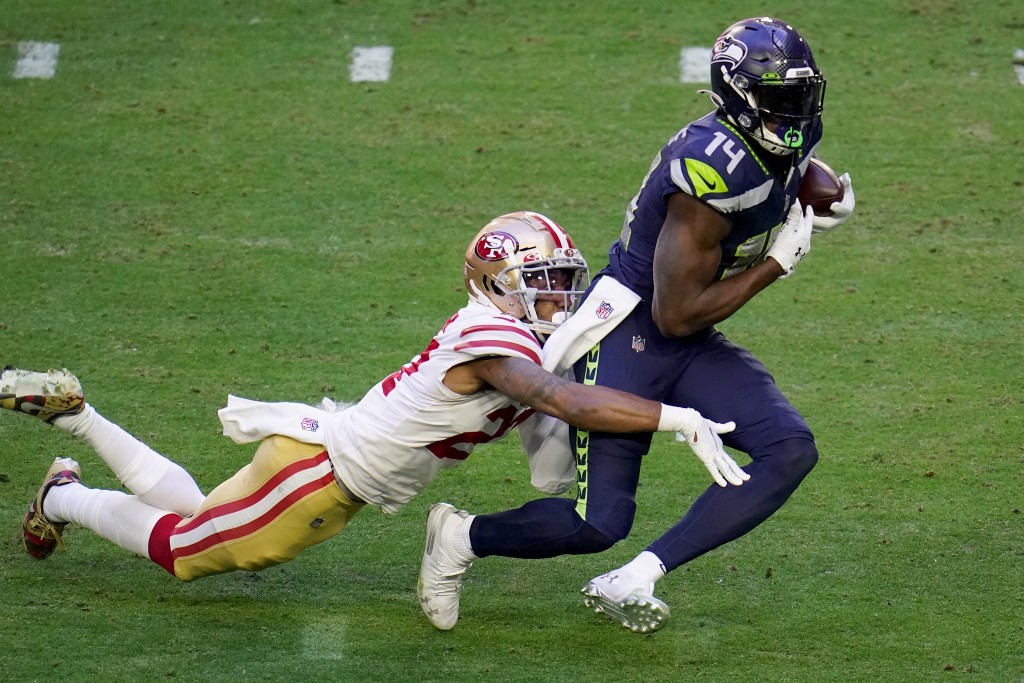 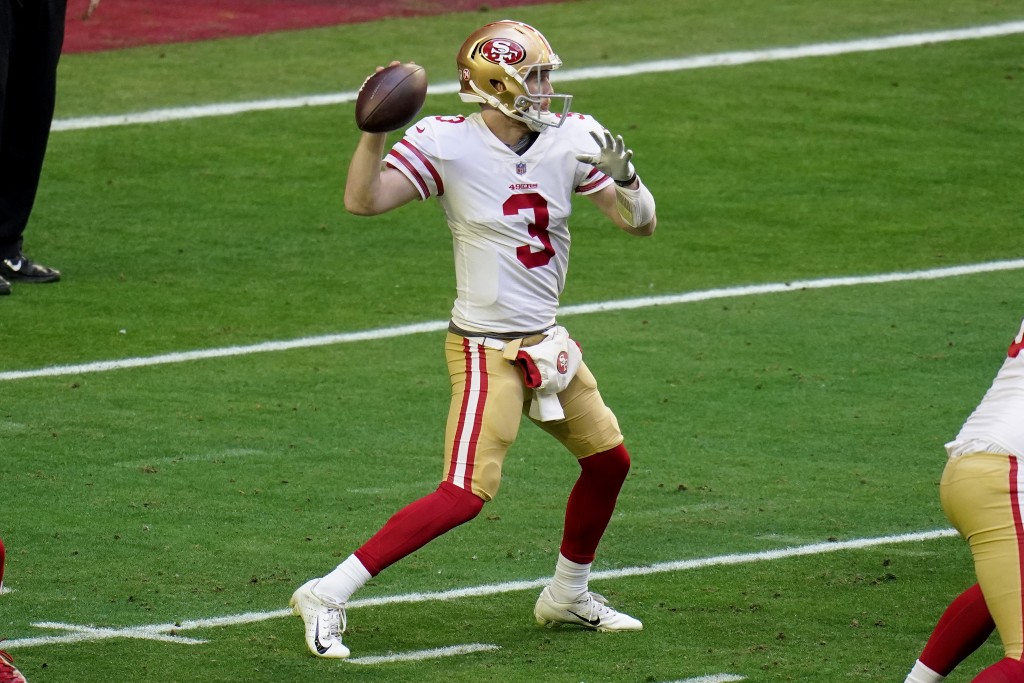 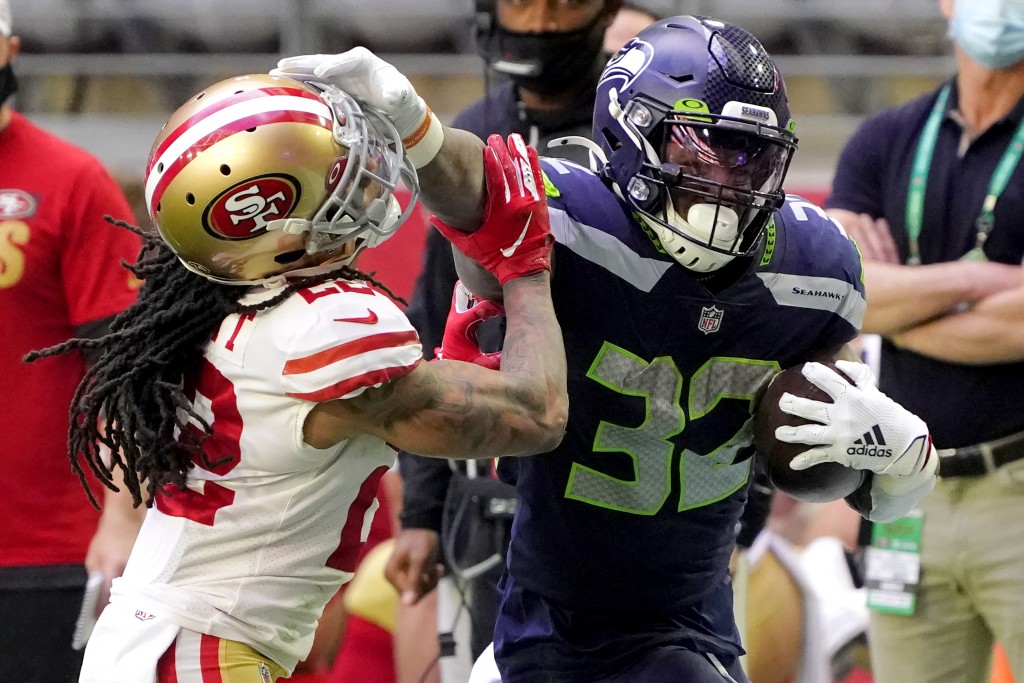 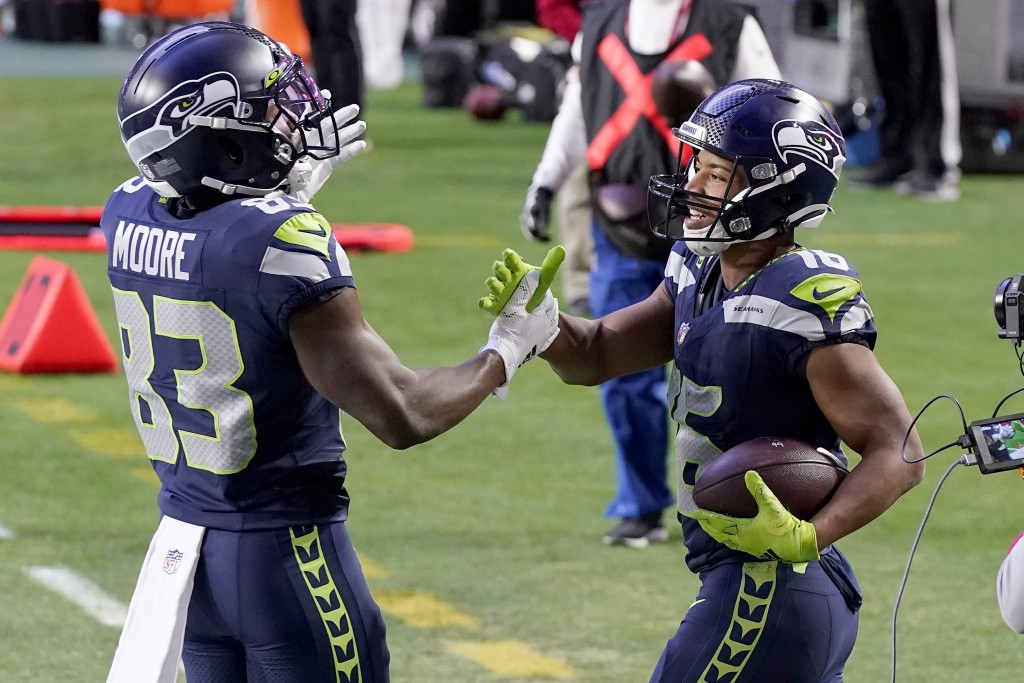 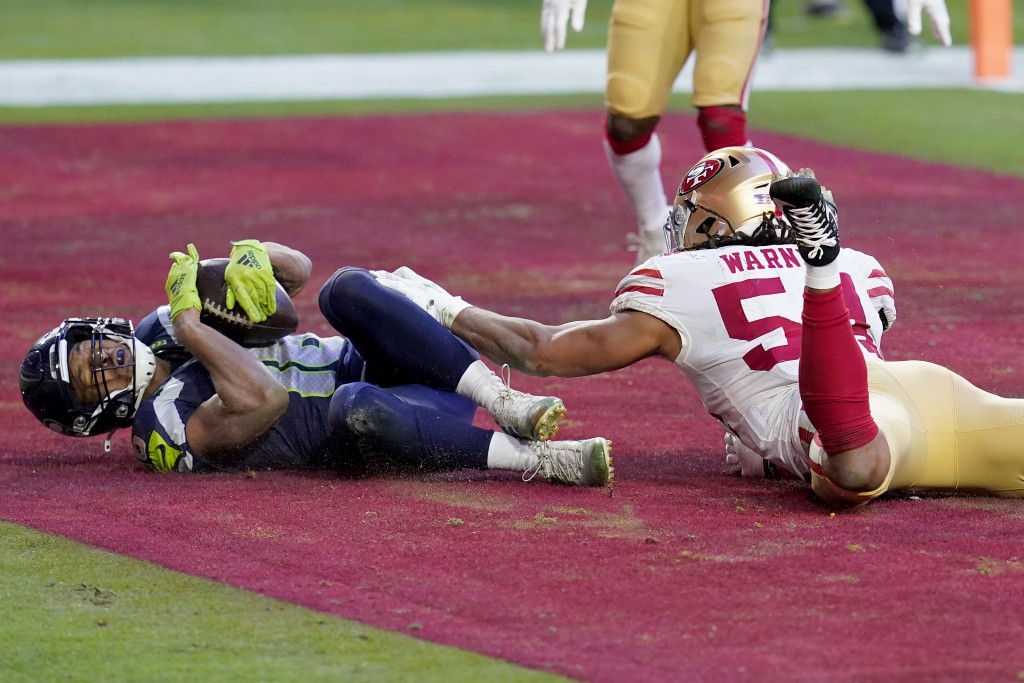 GLENDALE, Ariz. (AP) — Russell Wilson connected on two fourth-quarter touchdown passes to Tyler Lockett and the Seattle Seahawks rallied for a 26-23 win over the San Francisco 49ers on Sunday to end the season on a four-game winning streak.

Seattle (12-4) had a chance to earn the No. 1 seed in the NFC playoffs but stayed at No. 3 after the New Orleans Saints and top-seeded Green Bay Packers both won. The Seahawks will host the division rival Los Angeles Rams in the wild-card round next weekend.

Seattle (12-4) had a slow start and appeared in serious trouble when Jeff Wilson Jr. ran for a 7-yard touchdown early in the fourth quarter to push the 49ers ahead 16-6.

But the Seahawks responded with their first touchdown when Russell Wilson avoided pressure and hit Lockett for a diving 6-yard touchdown in the back of the end zone. Jason Myers missed the extra point and the Seahawks trailed 16-12.

Seattle forced the 49ers to punt on the ensuing possession and then methodically marched 85 yards on 14 plays and scored the go-ahead touchdown on fourth down on Wilson's 4-yard throw to Lockett. Wilson finished 20 of 36 passing for 171 yards. Lockett had 12 catches for 90 yards.

The 49ers (6-10) were eliminated from playoff contention a few weeks ago and have been based in Arizona for more than a month because of coronavirus restrictions in their home county. The team still pushed the playoff-bound Seahawks all afternoon.

Third-stringer C.J. Beathard completed 25 of 37 passes for 273 yards and a touchdown but fumbled late in the fourth quarter, which set up Collins' touchdown. Tristan Vizcaino made his first three NFL field goals after being signed by the 49ers earlier this week.

Both teams got off to a slow offensive start. Seattle had two promising drives stall in the red zone and had to settle for field goals from Myers, who connected from 36 and 30 yards to push the Seahawks ahead 6-0 midway through the second quarter.

It was the second straight start for Beathard, who helped lead the 49ers to a win over the Arizona Cardinals last week. The quarterback's first two starts since 2018 came after injuries to starter Jimmy Garoppolo and backup Nick Mullens.

It was the third straight “home” game the 49ers played in Arizona and the team was winless in those contests.

The 49ers arrived in Arizona on Dec. 2 and began practicing the next day. The team stayed at a hotel near the Cardinals' stadium in Glendale. There were practice fields close by, which kept the team in a contained area. Families of players, coaches and staff were able to come to Arizona and reunite during Christmas week.

The only game San Francisco won at State Farm Stadium this season was a road game. The 49ers beat the Cardinals 20-12 last week.

Largent had 1,287 yards in 1985. Metcalf entered the day 6 yards shy and broke the record with consecutive catches of 5 and 4 yards in the second quarter. He caught only one more pass and finished the season with 1,302 yards.

Lockett also went over 1,000 yards for the season on a 26-yard catch to start the second quarter. Joey Galloway and Brian Blades in 1995 were the only Seahawks teammates to accomplish that feat in the same season.

Lockett had two big games in Arizona this season with 27 catches for 290 yards and five TDs against the 49ers and Arizona Cardinals.

Seahawks: DT Jarran Reed left the game in the third quarter because of an abdominal injury.

49ers: DE Dion Jordan (knee) was injured early in the second half and didn't return.

The Seahawks will host the Rams in the first round of the playoffs next weekend.

The 49ers will try next season to get back to their 2019 form, when they made it to the Super Bowl.