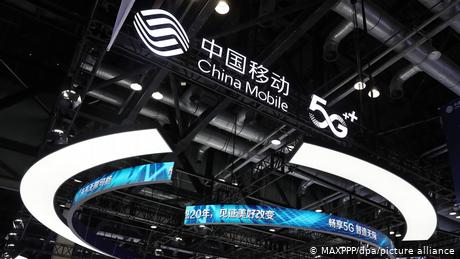 The NYSE announced earlier this week that it would halt the trading in shares of China Mobile Ltd., China Unicom Hong Kong Ltd. and China Telecom Corp Ltd. by January 11.

The stock exchange said it took the decision because of an executive order from US President Donald Trump that barred Americans from investing in firms with ties to the Chinese military.

The move has furtherstrained ties between Washington and Beijing, who have butted heads over trade and the coronavirus pandemic during Trump's time in the White House.

What was China's response?

A Chinese Commerce Ministry spokesperson said in a statement that the NYSE delisting will "greatly weaken all parties' confidence in the US capital market."

The ministry said the decision to delist the three telecom firms was an abuse of national security and inconsistent with market rules.

China "will take the necessary countermeasures to resolutely safeguard the legitimate rights and interests of Chinese companies," the ministry spokesperson said, without naming specifics.

Will the NYSE delisting affect the Chinese firms?

All three telco companies are state-run enterprises that operate under Beijing's firm control. They are the only three companies in China that are allowed to provide broad telecommunication services, an industry the government believes should remain under state control.

Losing their listing will unlikely have much of an effect on the firms. Beside state funds, the three companies can still attract international investment by selling shares in Hong Kong.

But the delisting is another tie severed between the world's two biggest economies. The Trump administration has already blacklisted electronics giant Huawei and has fought to ban the social media platform TikTok.

In December, US Congress passed a bill that would close American markets to Chinese firms that don't comply with US oversight or financial audits.