TAIPEI (Taiwan News) — As Taiwan emerges from the effects of a continental cold air mass that saw the mercury plummet to below 10 degrees Celsius in some parts of the country, a period of more settled weather will follow, according to the Central Weather Bureau.

The frigid nighttime temperatures in mainly western Taiwan will warm, with showers set for the north and east over the next few weeks, and stable weather elsewhere. Daytime highs on Sunday of 20 C are being predicted across Taiwan.

However, from Tuesday (Jan. 5) there will be a return to colder climes and rain in the northern half of Taiwan due to a northeasterly monsoon, CWB forecast Saturday (Jan. 2). January is usually the nation’s coldest month with average temperatures of around 16 C. 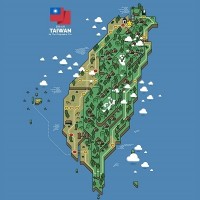