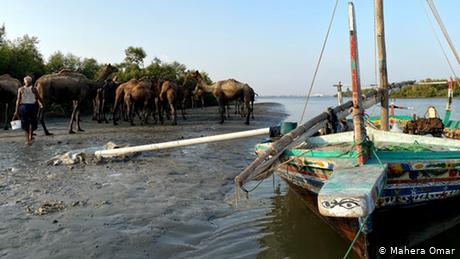 The government's decision to establish the Pakistan Islands Development Authority and bring the Bundal and Dingi islands off the Karachi coast under federal authority shocked Majeed Motani, a 70-year-old fisherman.

"Our forefathers came to these islands centuries ago. Now, the government is trying to occupy them. It is a threat not only to our livelihoods but also to the island mangroves," Motani told DW.

Experts say the mangroves along the uninhabited islands are crucial to the environmental protection of Karachi, Pakistan's most-populous city and financial hub.

Bundal Island in the Arabian Sea is part of the Indus Delta region, which is protected under the international Ramsar Convention on Wetlands. It is already facing multiple threats – increasing air and water pollution, rising sea level, exploitation of resources, hunting, and habitat loss.

Moreover, Prime Minister Imran Khan said in September he wanted to turn these islands into mammoth real-estate projects, with a proposed investment of $50 billion (€41 billion) that would also help create 150,000 jobs. The proposed project aims to ease the urbanization pressure on Karachi, a city of more than 20 million people.

DW has seen a Maritime Affairs Ministry tender notice, which seeks proposals from national and international firms for the urban development project.

Environmentalists and leaders of the provincial Sindh government are opposed to the Bundal Island "New Dubai" housing project.

"The federal government issued an unconstitutional ordinance. The Sindh government will resist it for the sake of our environment and our people," Murtaza Wahab, a spokesperson for the provincial government, told DW.

Environmentalists say that coastal mangroves help minimize the risk of natural disasters, including urban flooding, and work as natural barriers to avoid tsunamis. For decades, Pakistani authorities have neglected these small islands off the coast of Karachi.

"I have been filming the biodiversity on these islands for many years. A short boat ride from the mainland will take you to once-pristine mangrove forests, which are now in a terrible shape. Tree stumps dot the shores, with mud crabs clinging to the remnants of the once mighty mangrove," Mahera Omar, a Karachi-based filmmaker who covers environmental stories, told DW.

"At this rate of habitat loss, several of Karachi's marine species are at risk of extinction," she added.

Arif Belgaumi, an architect and town planner, slammed the government's island housing plan, saying a construction of the scale that is being proposed for the Bundal Island Project will destroy the mangroves there.

"It will also cause a tremendous environmental damage to the seabed. Also, the housing project will involve construction of roads, shorelines, bridges and other concrete infrastructure. It will pollute the area and damage the island's natural environment," he told DW.

The fishing community is worried that the development of these islands could threaten their livelihood.

"The development of these islands will displace at least 2.5 million fishermen and their families," Mohammad Ali Shah, the founder of the Pakistan Fisherfolk Forum (PFF), told DW.

"We have been protesting against the proposal since the government came up with it. We will not allow anyone to exploit our resources. We will go to court if the government starts illegal construction on these islands," Shah added.

Osama Malik, an Islamabad-based legal expert, urges the Pakistani government to fulfill its duties under the International Covenant on Economic, Social and Cultural Rights, and the ILO Convention 107 on Indigenous and Tribal Populations. "The conventions require Pakistan to respect the economic and cultural rights of the indigenous fisherfolk, who for centuries have earned their living around these two islands," Malik told DW.

Filmmaker Omar says the government needs to reconsider its island development plans as "new cities should not be an ecological nightmare for locals."