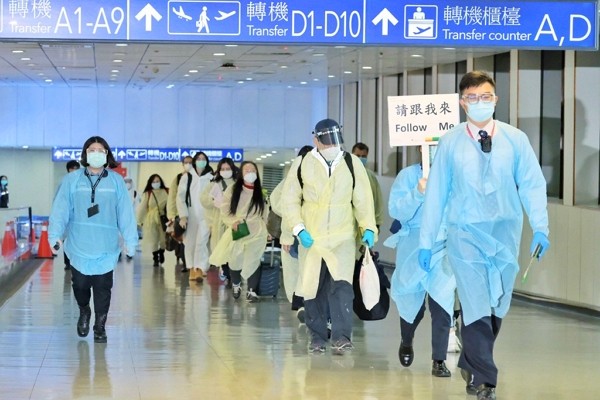 Taiwan's Central Epidemic Command Center (CECC) said Friday (Jan. 1) that of the passengers with a recent travel history to the United Kingdom, 106 had so far tested negative for COVID-19 upon completion of their mandatory 14-day quarantine.

According to the CECC, starting Dec. 13, anyone who either transit through or return from the U.K., are required to be tested again for COVID-19 prior to the end of their quarantine period due to the recent worsening coronavirus developments there.

Some 111 U.K. arrivals have so far been tested, while the results of five others have yet to be confirmed, deputy chief of the CECC's medical response division Lo Yi-chun (羅一鈞) said at a press event in Taipei.

Citing findings by the World Health Organization, he said that since SARS-CoV-2 became widespread from last February, the virus has mutated into different variants, as has been discovered in Denmark in October-November to more recently in the U.K. and South Africa.

According to Lo, the new variants from the U.K. and South Africa were said to be more contagious than the original form, although there have so far been no reports of more serious symptoms or an increase in deaths as a result of the new variants.

All viruses mutate, which is just their natural progression, Lo said, adding that the CECC will continue to keep a close watch on the virus's evolution.

Asked why the fee for self-financed COVID-19 tests offered in Taiwan are relatively high -- sometimes priced at NT$7,000 (US$249) per person -- compared to Hong Kong, where it is only around NT$1,000, Lo said the cost of a self-financed nucleic acid test for COVID-19 is determined by each hospital, with some costing only NT$5,000.

One possible reason, he said, is that no matter whether many or only a few people seek testing, the manpower and resources remain similar, hence the price differential.

While far more people in some countries are seeking self-financed testing compared with a much smaller number in Taiwan, it means that large numbers of people can be tested at the same time, which keeps costs lower, Lo said.