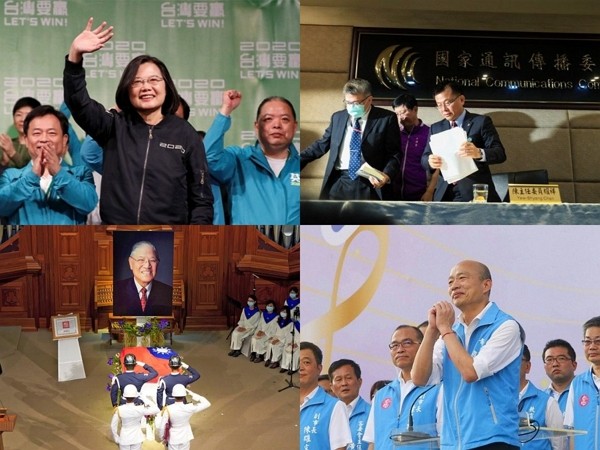 The BBC's video looking back at 2020 was posted on YouTube last weekend, with the description reading that the year has been a reminder of all the courage and love in the world. Besides the global COVID-19 outbreak, the video also features the Taiwan presidential election, the Kaohsiung mayoral recall, the passing of Taiwan's first directly-elected president, and the closure of CTi News.

On Jan. 11, Taiwan President Tsai Ing-wen (蔡英文) was reelected in a landslide victory with more than 8 million votes against Kuomintang candidate Han Kuo-yu (韓國瑜) and People First Party candidate James Soong (宋楚瑜). She set a new record for the highest number of votes received by a candidate in the country's direct presidential elections, which began in 1996.

Five months later, Han, who decided to run for president just four months after being elected as Kaohsiung mayor, lost an election to recall him and became the first municipality leader in Taiwan to be recalled. Since then, he has not taken on any new political positions.

Lee Teng-hui (李登輝), who is considered the "father of Taiwan's democracy," passed away at the age of 97 on July 30. He was honored by major figures around the world, including then Japanese Prime Minister Shinzo Abe, the Dalai Lama, and U.S. Secretary of State Mike Pompeo.

The National Communications Commission's rejection of the license renewal by CTi News in November was another event that drew the Taiwanese public's attention. The regulators defended their decision by accusing the news channel of spreading disinformation and biased reporting.

Since it was released, the BBC video has received praise from netizens, with many users praying for a more peaceful year in 2021.