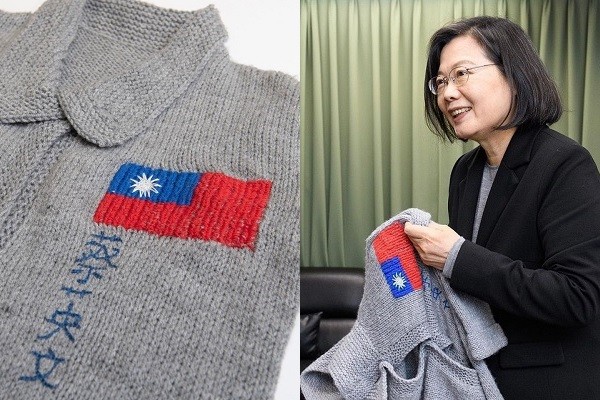 TAIPEI (Taiwan News) — Photos that Taiwanese President Tsai Ing-wen (蔡英文) posted of a sweater made by the grandmother of a French YouTuber have gone viral.

Quentin Richard, who goes by the handle "Ku's Dream" (酷的夢) and has been living in Taiwan for three years, was recently given a Hakka-style floral print handbag by Tsai to take back to France as a gift for his grandmother. His grandmother was so pleased with the gift that she decided to knit a sweater for Tsai to express her appreciation.

On Wednesday (Dec. 30), Tsai posted photos of the sweater on her Instagram page. As can be seen in the photo below, the gray sweater includes a Taiwanese flag and Tsai's name in Chinese characters embroidered on the left side. Within less than 24 hours, the post received over 48,000 likes and 545 comments.

In her post, Tsai said she was pleased that Richard's grandmother liked the bag, and she thanked them both for the sweater. She said it came as Taiwan is being struck by the first cold wave of the winter.

Included with the package containing the sweater was a handwritten letter in French in which the woman wrote she was giving "a small gift for a great lady." She expressed her hope that Tsai will continue to serve as president for a long time "for the good of all the Taiwanese."

She closed by saying that Tsai is "an example for us French."