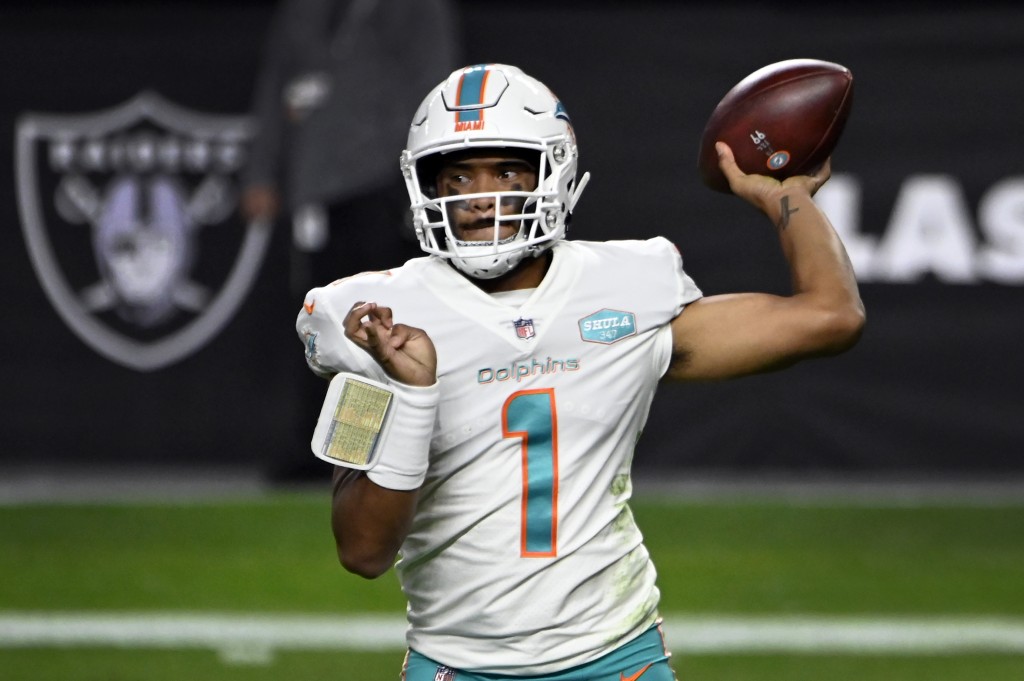 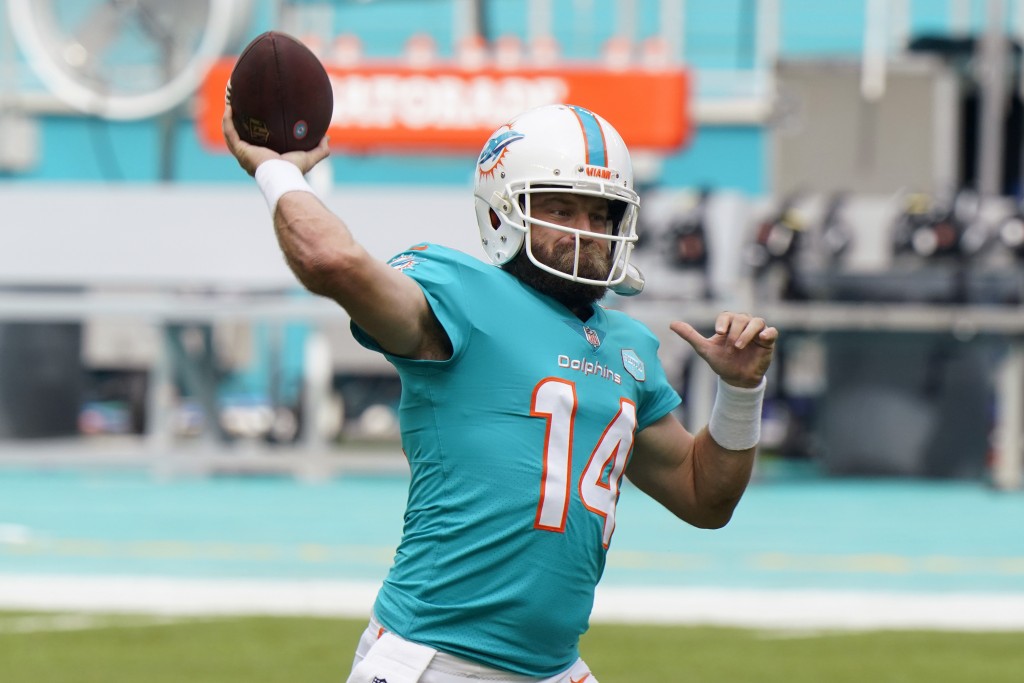 MIAMI (AP) — The Miami Dolphins need a good game Sunday to ensure they get to keep playing, and that's especially true for Tua Tagovailoa.

With another dud, the rookie quarterback might be watching the final minutes from the sideline again as Miami tries to clinch a playoff berth at Buffalo.

“The expectation for myself is very high,” Tagovailoa said Wednesday. “Obviously this past week I didn’t play to that standard.”

FitzMagic kept the Dolphins (10-5) in control of their chances entering Sunday's regular-season finale against the Bills. It also further fueled the debate among Monday morning quarterbacks regarding who should be Miami's Sunday afternoon quarterback.

Flores has been bold all year in deciding the matter. He promoted Tagovailoa to No. 1 before Game 7, even though Miami was on a two-game winning streak and Fitzpatrick was playing well.

Flores has also showed a willingness to give Tagovailoa the hook, despite the risk he might rattle the confidence of a 22-year-old drafted as a potential franchise quarterback.

“I have a lot of peace with the decisions that I and we make because it’s sincerely, genuinely and authentically based on winning games," Flores said.

Tagovailoa is 6-2 as a starter, and Flores said the rookie will get the nod again at Buffalo and gives Miami the best chance to win.

There's no sign the unsettled quarterback situation has divided the team, partly because Tagovailoa and the 38-year-old Fitzpatrick are model locker room citizens who have developed a close relationship.

That was evident late in the Raiders game,when Fitzpatrick threw a touchdown pass to put the Dolphins ahead and was greeted along the sideline by Tagovailoa with a celebratory flying shoulder bump.

There has been much to celebrate: Despite the revolving door at QB, the Dolphins are on pace to top 400 points for the first time since 1986, and they're on the verge of only their third playoff berth since 2001.

Credit both Tagovailoa and Fitzpatrick for making a two-quarterback system work.

“The only people it should really affect are Fitz and Tua,” tight end Mike Gesicki said. “And they handle it great. You always see Fitz helping out Tua, Tua supporting Fitz. They’ve done a great job with it and just kind of understand each other’s roles.”

Tagovailoa's role has been as a game manager, and he has done that well, avoiding mistakes and letting the Dolphins' dominant defense make game-changing plays. Fitzpatrick's role has been to let loose and rally the troops.

Statistics reflect the contrasting styles. Remarkably for a rookie, Tagovailoa has the NFL's lowest rate of interceptions, with two in 232 passes.

“That’s a good place to start at the quarterback position," Flores said.

Fitzpatrick ranks 32nd in interception rate. But he's 14th with an average of 11.4 yards per completion, while Tagovailoa ranks 34th at 9.6.

Tagovailoa's biggest gain all year has been 35 yards. Some 52 NFL players have thrown a longer completion, including three receivers.

“Pushing the ball downfield — that's what I need to do a better job with,” he said.

“We’ve been a team that has tried to be nine-, 10-, 11-, 12-play drives, run the football, play-action pass, control the time on the clock,” Gailey said. “That’s the situation we've found with Tua in the ballgame.”

In the past two weeks, Tagovailoa has thrown for just 145 and 94 yards. Such modest productivity heightens speculation the Dolphins will draft a quarterback in the first round again in April, when they might pick as high as No. 3 because they own Houston’s selection.

For now, Flores will stick with Tagovailoa, although that could change in the second half Sunday.