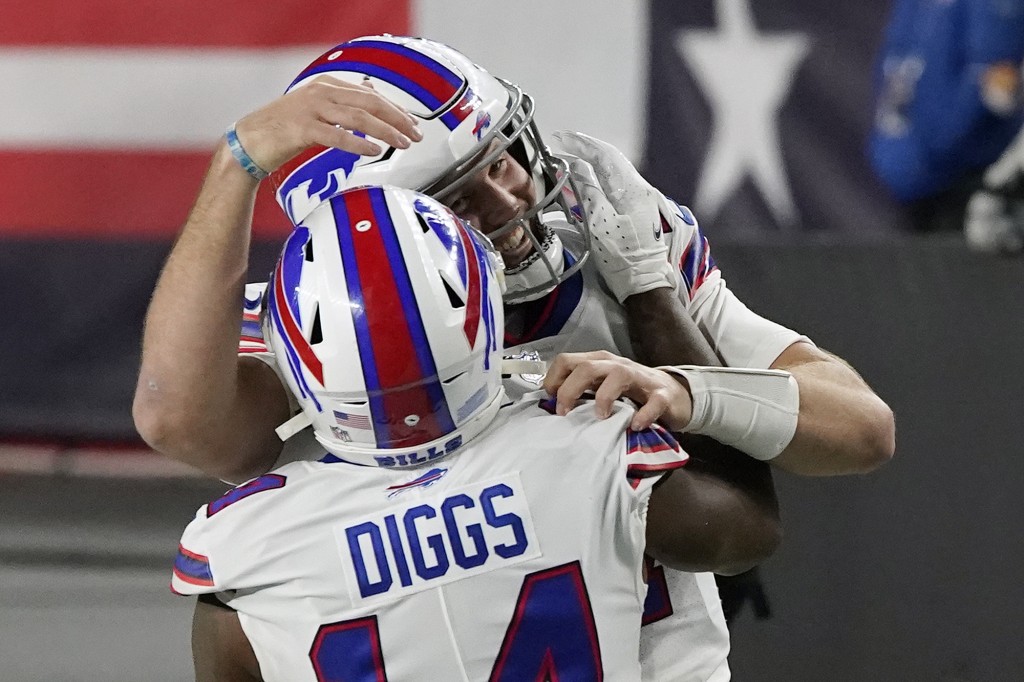 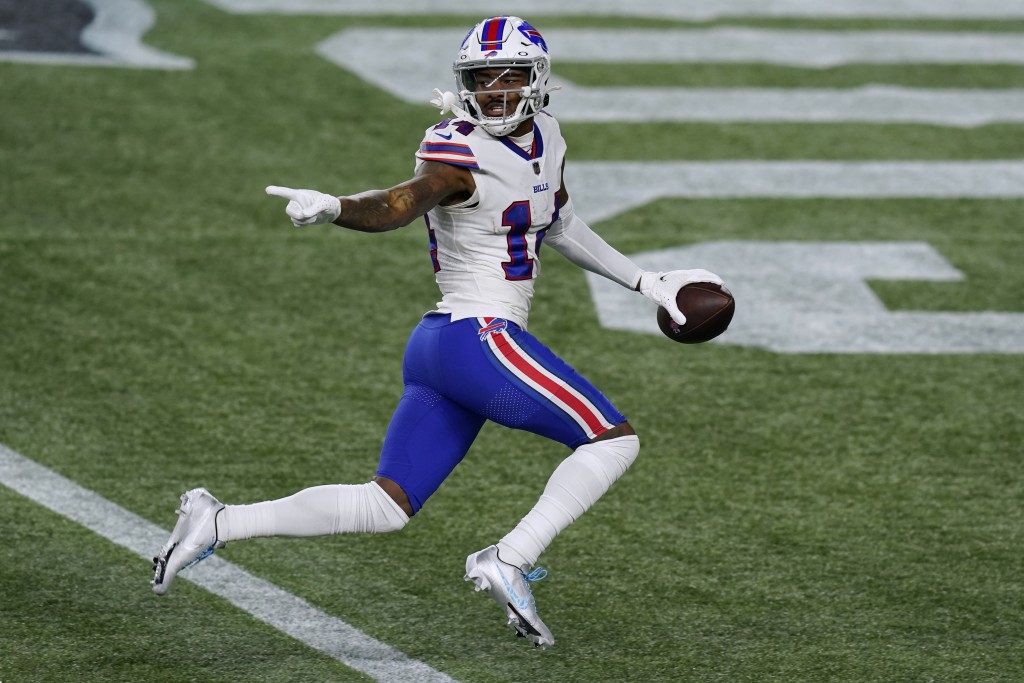 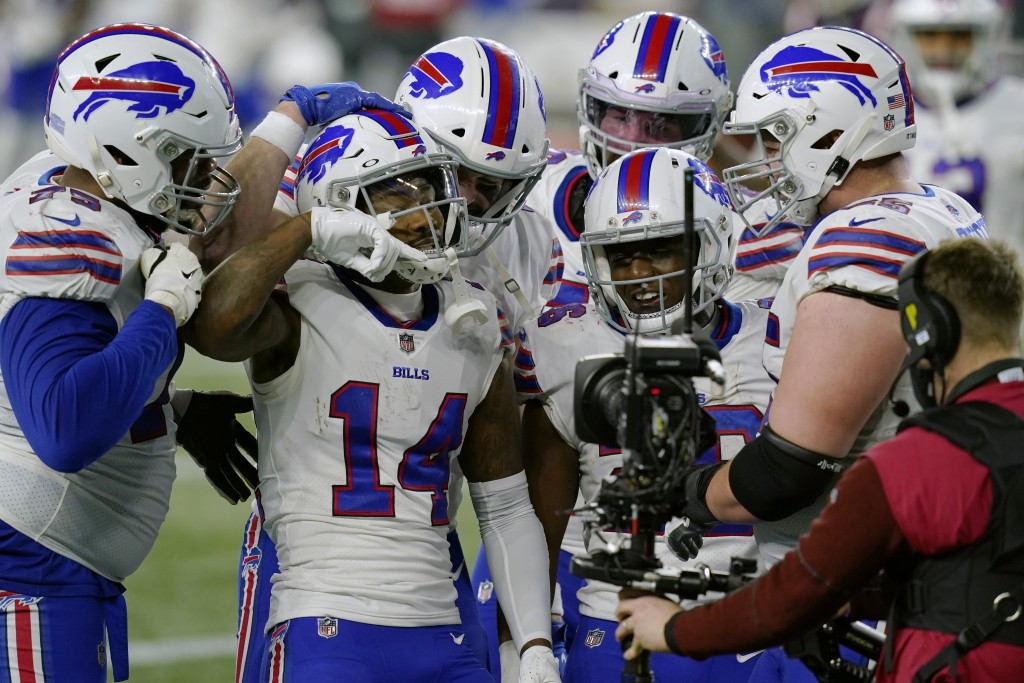 Acquired in a trade with Minnesota in March, Diggs likes to remind people this is only the dynamic duo’s first season together.

“I don’t know the past. I just know Josh right now, and he’s playing great football,” Diggs said. “I feel like we’re scratching the surface on the potential we have.”

The sixth-year player provided the sobering perspective after the AFC East champion Bills routed New England 38-9 on Monday to win their 12th game for the first time since 1993 and complete their first season sweep of the Patriots in 21 years.

Allen and Diggs put their chemistry on full display before a national prime-time audience.

Diggs earned his first AFC offensive player of the week honor with nine catches for 145 yards and three touchdowns. In the process, he upped his NFL-leading season totals to 120 catches, extending his Bills single-season record, and 1,459 yards, eclipsing the team record of 1,368 set by Eric Moulds in 1998.

Allen's four touchdown passes gave him 34 this season, surpassing Hall of Famer Jim Kelly’s team record by one. And Allen needed to play just three snaps into the fourth quarter to top 300 yards passing for the eighth time and break the team record set by Drew Bledsoe in 2002.

It’s unclear whether the two can add to their production with coach Sean McDermott not revealing whether he’ll rest his starters Sunday when Buffalo hosts Miami. The Bills can fall no lower than the AFC’s third seed, and would clinch the No. 2 spot with a win or a Pittsburgh loss.

However things turn out, Diggs and Allen have already made a big impression on their teammates.

“I’m sorry, let me just say this, Diggs is a problem. Man. Woo! Him and Josh,” Hyde said, interrupting the first question posed to him following the game. “I got a free ticket to watch them play. Man, it’s impressive. To see them, it’s like they’re playing Madden out there.”

Though Diggs topped 130 yards for a third consecutive outing, his performance against the Patriots might have been his most impressive given how New England was intent on blanketing him. After managing one catch for 2 yards on three targets through Buffalo’s first three possessions, Diggs found ways to free himself, while Allen showed confidence by creatively delivering passes in tight windows.

It was evident on Diggs’ 50-yard touchdown, which came on a crossing pattern. Allen timed his throw perfectly, hitting the receiver in stride as he cut upfield behind two defenders.

And it happened again on Diggs’ 8-yard TD. Allen scrambled out of the pocket and delivered a low, hard pass, and Diggs made a diving catch just inside the end line.

“Not many guys can make that catch. The way you have to torque your body, and how low you have to get,” Allen said. “The trust level to get back, and for me to put that in a spot where I feel like he can get it, it was amazing to watch.”

Because of the coronavirus pandemic Diggs and Allen lacked a traditional offseason to build rapport. Except for bonding while playing video games remotely, the two enjoyed one workout together in Florida before the start of a shortened training camp and no preseason games.

“Six months ago, who knew we would be right here now? Nobody would have,” Diggs said.

“I’m just thankful to be where I am, and thankful for the people that I’m around. They make it fun,” he added. “Josh makes it fun. He tells me: ‘Just get open and catch the ball.’”

Though the Bills have set plays, their offense revolves around receivers using their instincts to get open, and Allen delivering them the ball.

“I’m a big believer in I don’t care how you get separation, whether you run a stop at 6 yards or 9 yards or whatever the case may be,” Allen said. “Get open, catch the ball and I’ll adjust.”

It helps that Allen has a collection of established receivers in Diggs, Cole Beasley and John Brown who possess similar speedy and shifty qualities.

Without making any comparisons, coordinator Brian Daboll explained Allen’s “get open” philosophy for receivers is similar to that of Tom Brady and Brett Favre, especially when facing man-to-man coverage.

Daboll insists there are always areas that can be improved even for an offense that leads the league in third-down efficiency; ranks second in passing yards and fourth in overall yards; and is 14 points shy of breaking the franchise record of 458 set in 1991.

And yet, he acknowledges his offense has begun to hit its stride.

“Each week, it’s gotten a little better,” Daboll said. “We kind of feel we know who we are right now."