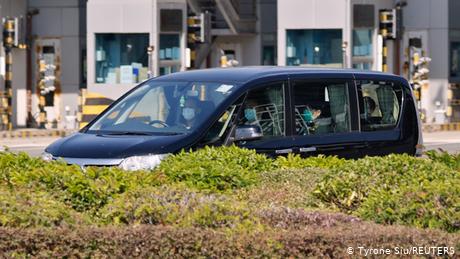 A Chinese court on Wednesday sentenced 10 pro-democracy activists accused of trying to flee Hong Kong to between seven months and three years in jail.

The Yantian District People's Procuratorate in the southern city of Shenzhen passed the order, adding that they would also be fined.

The 10 activists were among the "Hong Kong 12" who were detained by the Chinese coast guard in August on charges of illegal border crossing as they allegedly attempted to escape Hong Kong on a boat to seek asylum in Taiwan.

The group included two teenage activists, aged 16 and 17, who will not be charged and will be sent back to Hong Kong, the court said, adding that the two had admitted wrongdoing.

The teenagers were expected to be handed over to the Hong Kong police in a border transfer as early as Wednesday noon, news agency AFP reported.

Two of the adults who were suspected of organizing the crossing were sentenced to two and three years of prison time, respectively.

The court sentences appear to be a warning to anti-government protesters and activists against trying to evade enforcement of the tough new national security law imposed on the semi-autonomous Hong Kong by Beijing in June.

The US and several European nations have called for the 12 activists to be released and returned to Hong Kong, saying their trial was not fair.