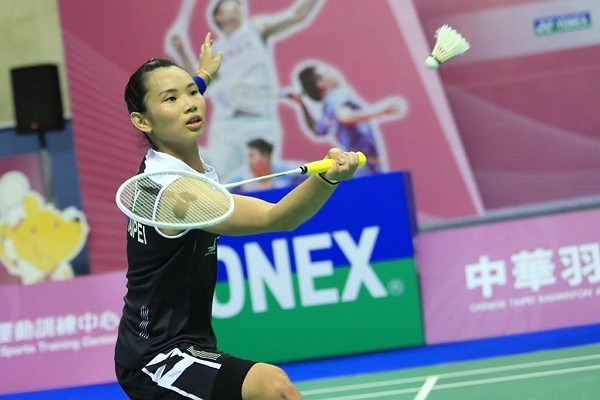 Since regaining her position as No. 1 in the world in the women's singles category in March, Tai has not competed in any international events due to the coronavirus pandemic. However, she has kept herself in peak fitness through rigorous training in Taiwan.

Tai will travel to Thailand on Sunday (Jan. 3) and undergo a seven-day quarantine before she takes the court at the YONEX Thailand Open Jan. 12-17. She will then compete in the Toyota Thailand Open Jan. 19-24 and the HSBC BWF 2020 World Tour Final from 27-31.

Tai will face Thailand's Nitchaon Jindapol in her first international match in 10 months. The two players have met nine times already, with Tai having an 8-1 advantage over the Thai hopeful.

Taiwan's top two men singles players, No. 2 in the world Chou Tien-chen (周天成) and No. 12 Wang Tzu-wei (王子維), are also planning to take part in the BWF events, according to ETtoday. The matches will decide the players' new rankings, which have been suspended since March 17.

Tai explained on Instagram Tuesday (Dec. 29) that the Thailand events will determine her qualification for tournaments held in the second half of 2021. She said she is both excited about returning to the court and nervous about leaving Taiwan, which has been relatively untouched by the pandemic.

Tai emphasized that no athletes can survive without a stage, and she thanked her trainers and fans for their constant support. She said she will continue to follow her dreams and give her best effort at the Thailand competitions.