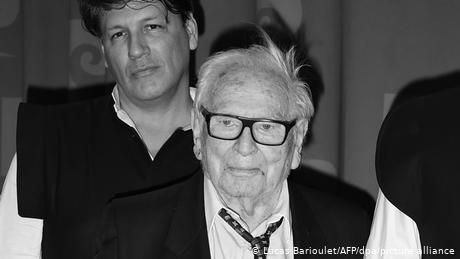 The French fashion designer Pierre Cardin died at a hospital in Neuilly, west of Paris, on Tuesday at the age of 98, his family told news agency AFP.

"It is a day of great sadness for all our family. Pierre Cardin is no more," the statement said.

France's Fine Arts Academy confirmed Cardin's death in a tweet, adding that members of the academy were "very sad."

Who was Pierre Cardin?

Born into poverty in 1922 near Venice in northern Italy, his family emigrated to France when he was still a child.

He grew up in the French industrial town of Saint Etienne. At the age of 17 he became an apprentice to a tailor in Vichy and was already specializing in women's suits.

He then moved to Paris, where he designed the mesmerizing sets and costumes for the film "Beauty and the Beast" with poet, artist and director Jean Cocteau in 1947.

After a stint with Christian Dior, Cardin founded his own fashion house in 1950. In the following decades he built up a global business empire.

Along with Paco Rabanne and Andre Courrege, Cardin was hailed for developing the futuristic Space-Age-inspired styles that defined looks in the 1960s and 1970s.

In 1954, he showcased the now-legendary bubble dress. A decade later, he unveiled the 1964 "Space Age" collection that remains a landmark in fashion history.

He was also credited with bringing stylish clothes to the masses, popularizing the turtleneck sweater for men and bodysuits for women.

Both businessman and designer

Cardin was the first designer to sell clothes collections in department stores in the late 1950s, and the first to enter the licensing business for perfumes, accessories and even food — now a major profit driver for many fashion houses.

His business sense was controversial. He sometimes faced criticism, accused of destroying the value of his brand and the notion of luxury in general. But he seemed largely unaffected by such comments.

"I don't dream of money after all, but while I'm dreaming, I'm making money," he told Germany's Süddeutsche Zeitung in 2007.

"It's never been about the money."