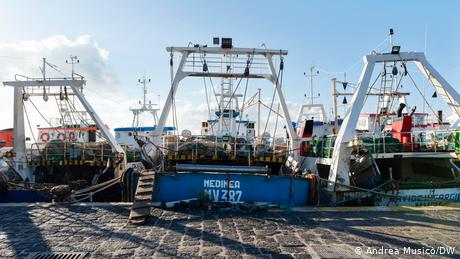 In the eastern part of Mazara del Vallo, Italy's biggest fishing port, stands a little-known memorial bearing the inscription "To Omar al-Mukhtar, hero of independence. In the name of friendship with the Libyan people."

Situated on the roundabout leading to Africa Avenue and facing the sea, this modest and inconspicuous stone monument has recently been the cause of a number of sarcastic remarks by some locals. "I told the mayor to get rid of this stone," says Ignazio Bonomo, whose father Giovanni returned home five days before Christmas after 108 days in detention in the Libyan coastal city of Benghazi.

Giovanni Bonomo is one of 18 fishermen captured by the Libyan coast guard on September 1 while sailing in international waters, over which Libya has illegally extended its jurisdiction to allow it to control an area rich in the highly prized red prawn.

Italian fishing boats have often been involved in these kinds of incidents in the past, but this time, the fishermen were held as political prisoners.

Tears of joy and relief

Bonomo and his fellow fishermen sailed back to Mazara del Vallo in their boats, the Medinea and Antartide, which had been seized and looted by the Libyans over three months previously. A huge crowd gathered to welcome them home. "When we arrived at the dock and I saw all the people waiting for us, I cried for the entire day," he says.

The fishermen were freed on December 17, after Italian Prime Minister Giuseppe Conte and Foreign Minister Luigi Di Maio flew to Benghazi to meet Khalifa Haftar, the warlord who controls eastern Libya. Haftar is seeking international recognition and wants to be included in Italy's foreign policy regarding the North African country. But Rome, like other European countries, officially only deals with the rival UN-backed government in Tripoli.

Di Maio has said that the release of the fishermen was secured without giving anything in return and has rejected questions about the terms of the release, stressing: "It is the result of the work of our external intelligence and diplomacy."

According to the pan-Arab journal Asharq Al-Awsat, "Well-informed Libyan sources state that it was agreed to extradite four Libyans convicted on charges of human trafficking in Italy in exchange for the fishermen." However, both the fishermen's lawyer and the Italian prosecutor in charge of their case deny this.

During a recorded phone call, former Prime Minister Silvio Berlusconi told Marco Marrone, the owner of the Medinea, that Russian President Vladimir Putin had facilitated the release by exerting his influence on Haftar.

To clarify the situation, the Italian parliamentary committee for the security of the Republic (Copasir), which is in charge of supervising the country's secret services, has declared that it will audit Conte, Di Maio and the head of the external intelligence in January 2021.

After-effects of a traumatic experience

"Whatever happened, I waited for their release before decorating the Christmas tree. I am happy, but the struggle is not over," says Rosaria Asaro, who says that her husband Giovanni talks in his sleep about the Libyan guards who psychologically abused him: "'They are coming,' he says."

During detention, the fishermen were incarcerated in four different prisons. Bonomo recalls the night before one transfer: "In the middle of the night, they let us out of the cell and put us next to each other, facing the wall. They pointed guns at us, and I thought they were going to kill us. Then they wet us with a hose, to wash us."

Nevertheless, he knows that he was privileged compared with other prisoners. "They once beat a Libyan with batons and stones and made him lick food from the floor," he says. Bonomo thought that he and his fellow fishermen would at some point be given the same treatment.

He says that some of them were close to suffering a breakdown, adding that one of the group "nervously walked back and forth in the cell. He threatened to commit suicide by drinking the bleach that was given to us to wash the hole in the floor we used as a toilet".

As if these appalling sanitary conditions were not bad enough, the fishermen did not have proper beds until a few days before their release. "We had some blankets that were so filthy that you had to stay away from them. I am getting pain relief injections for my legs after sleeping on the floor for months".

The assurances given by the Italian government about the conditions of the fishermen's detention apparently did not correspond with reality, but it's not clear what the government actually knew about them.

Even though their case made headlines around the world, Ibrahima Sarr only told his father in Senegal a few days ago that he had been imprisoned in Libya for more than three months. "I told him that it's over, but I haven't given him details of what happened. He is old and I don't want to worry him", he says. Instead, he has spoken at length to his sister, to whom he has sent videos from the press reporting on the case.

At 22, Sarr was the youngest crew member involved. He has lived in Italy since 2015, when he made a clandestine crossing by boat from Libya. "Back then, over there, nothing happened to me. I didn't know at that time what happens in this country. In Senegal, I never saw militias or someone bleeding as a result of torture. But now, in El Kuefia's jail [near Benghazi], I have."

For him, there was no respite during his 108 days in detention. "It was always terrible. Every day, I thought I would die." In the hope of having something to look forward to, he asked the guards many times when he would be released, but received no answer. This meant that even though he tried, it was never easy to take his mind off things.

"From Libyan prisoners we got a t-shirt with a chessboard drawn on it, to play checkers using plastic caps as pawns. But when the guards came, we put it away or pretended to sleep, because we were afraid of them getting angry".

Sarr now understands that his 2015 trip through Libya could have been much worse, but he is not fully aware yet of the geopolitical situation he escaped last week.

In 2017, Italy signed an agreement with Libya to stop illegal immigration and has since spent over €22 million ($27 million) on the Libyan coast guard, providing training for staff and buying a dozen patrol boats. But Libyan authorities keep violating migrants' human rights, and those same patrol boats were used to capture the Italian fishermen.

Confined to the darkness

Habib Mathlouthi thinks that the last jail where he was detained was a military station called Tariq ibn Ziyad, somewhere outside Benghazi. He could not see the road while he was being transferred. His cell was number 40, and like the others, it was specifically designed to psychologically torture inmates. "It was all painted black, without windows, only an air vent on the roof. It was totally dark".

The door was opened for the first time after 25 days. During this period, he showered only three times. He feels that prior to arriving at that jail, he may have been held in slightly better conditions than the others because as the cook on the Medinea, he was occasionally sent to help out in the previous jail's kitchen.

In an attempt to frame the fishermen, Haftar's men initially pretended to have found packets of drugs on the seized vessels and tried to make the fishermen sign a false confession. "I was obliged to sign some papers, but I could not read what they said", explains Mathlouthi. In similar circumstances, other fishermen were tricked into touching fake drug packages so that they would leave their fingerprints on them.

But worse was to come: "Once, they put me in isolation for hours and I don't know why. The guards were drugged up".

Now, however, Mathlouthi is quite calm, even though his mind returns to his time in detention when he is alone. After a rest, he wants to return to the sea, albeit never to the troubled waters off the Libyan coast: "I would never go back there. Not even for thousands of euros. Instead, I will work closer to Malta or Tunisia."