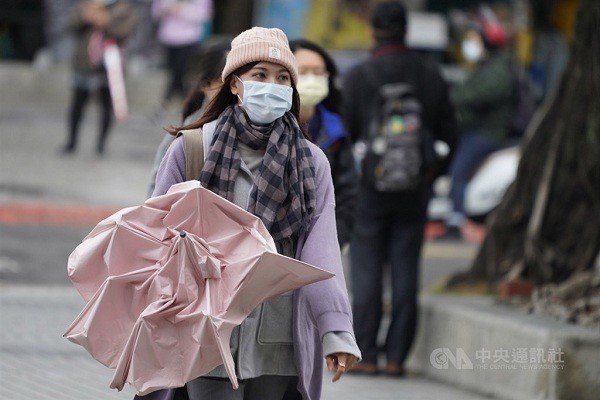 TAIPEI (Taiwan News) — The Central Weather Bureau (CWB) predicted on Sunday (Dec. 27) that a cold air mass will begin to move southwards on Dec. 30, causing temperatures to plummet in parts of Taiwan.

The forecasted temperatures in New Taipei’s Tamsui on New Year’s Eve will be around zero degrees Celsius, while high mountains in northern Taiwan, including Yangminsghan in Taipei, will have a chance of snow between Dec. 30 and Jan. 1.

CWB forecaster Chen Chien-an (陳建安) told CNA that the cold air mass would cause the mercury to fall from morning till night on the 30th, with temperatures hovering around 17 degrees during the day and at lows of seven or eight degrees at night in northern and northeastern Taiwan. Lower temperatures are expected for open areas along the coast on the same night, Chen added.

During the onset of the cold air mass from the afternoon of Dec. 30 and into Jan. 1, Chen said, mountainous areas that are 800 to 1,000 meters in elevation in northern Taiwan will have a chance of snow, such as Lala Mountain in Taoyuan and Taiping Mountain in Yilan, and even Taipei's Yangmingshan. He added that the chances of snow on mountains in central and southern Taiwan would be lower due to insufficient moisture.