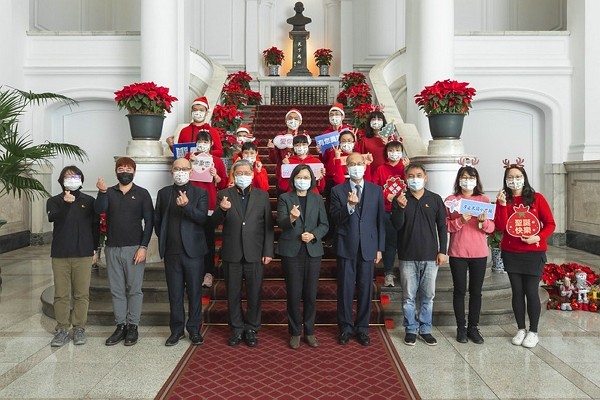 During her meeting with a delegation from the Eden Social Welfare Foundation at the Presidential Office Building on Thursday, Tsai pointed out that the country has made progress in creating a friendlier environment for those with disabilities. She offered thanks to the foundation, which has promoted support for people with disabilities and socially marginalized groups since 1982.

Tsai said she was impressed by Eden's social workers and members of the Xiufeng community-based inclusive living program in New Taipei when she visited in August. She said the foundation and its president, Cheng Liang (成亮), have brought joy and warmth to Taiwanese society.

Tsai mentioned that the government has strived to strengthen the country's social safety net in recent years with the help of civil organizations like Eden. She added that 423 policies have been revised to eliminate discriminatory text against people with disabilities and that only around 36 policies still need amending.

The president pledged that the government will invest more resources in protecting the rights of citizens with disabilities in the future. She also wished the Taiwanese public a Merry Christmas and a happy conclusion to 2020.