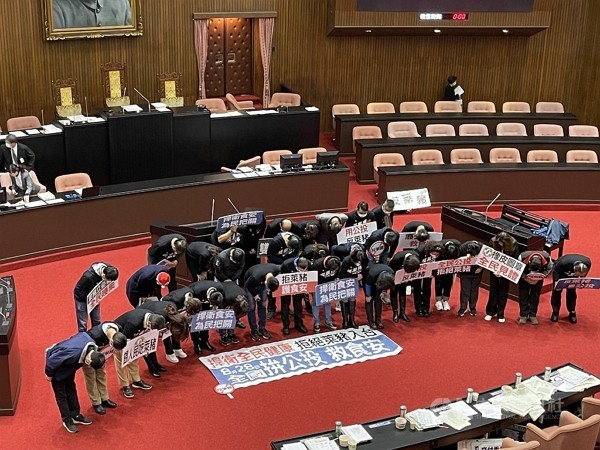 Taiwan's three opposition parties on Thursday (Dec. 24) expressed regret over the approval of a slew of administrative directives made by the Democratic Progressive Party (DPP)-controlled legislature earlier in the day, backing the government's decision to allow imports of pork containing the controversial feed additive ractopamine.

The main opposition Kuomintang (KMT) and two smaller parties -- New Power Party (NPP) and Taiwan People's Party (TPP) -- reiterated their opposition to the new policy, which is scheduled to take effect on Jan. 1 and is widely viewed as an effort to satisfy United States prerequisites for a bilateral trade deal.

In a press event, KMT Chairman Johnny Chiang (江啟臣) apologized over the party's inability to prevent the DPP from forcing through the nine directives with its 61 seat majority in the 113-seat Legislature.

"The forced passage of these directives shows the DPP's blatant disregard for the opinion of the majority of Taiwanese who oppose the new policy," Chiang said.

The KMT has already initiated two referendums with the aim of overturning the government's new policy on imported pork through direct democracy "so Taiwanese people can make their own decision (regarding the ractopamine issue)," Chiang said.

The two referendum initiatives Chiang mentioned have cleared initial hurdles when they were approved by the Central Election Commission (CEC) last week.

In the second stage, the petitions must collect the signatures of nearly 290,000 people, or 1.5 percent of eligible voters at the most recent presidential election, for the referendum to be held, according to the CEC.

Under Taiwan's Referendum Act, referendums can only take place every two years, the next possible date being Aug. 28, 2021.

Meanwhile, both the NPP and TPP issued similar statements, while also calling on the DPP government to safeguard people's health and food safety once the new policy goes into effect next year.

Asked to comment, DPP legislative caucus whip Chuang Jui-hsiung (莊瑞雄) promised that the ruling administration will safeguard food safety and introduce a series of measures to ensure school children will not eat imported pork and boost the international competitiveness of Taiwanese pork.

Chuang also reiterated the government's stance that the decision to open the local market to ractopamine pork was made to remove a major trade hurdle in meeting "international trade standards," a crucial move for a country that relies heavily on exports.

The directives that passed Thursday were announced shortly after President Tsai Ing-wen (蔡英文) said on Aug. 28 that Taiwan would open up to imports of U.S. beef from cattle over 30 months old and imported pork with acceptable levels of the leanness-enhancing drug ractopamine.

Ractopamine can be used on pigs in the U.S. but is currently banned for use on pigs in Taiwan as well as in the European Union and China because of concerns over its safety to both animals and humans.

The U.S. has long criticized Taiwan's zero-tolerance policy on ractopamine in pork as an impediment to trade and has not held formal talks on trade with Taiwan through the bilateral Trade and Investment Framework Agreement (TIFA) framework since October 2016.

Critics of the decision have argued that it fails to prioritize the health of Taiwanese or the interests of local pig farmers, despite government reassurances.