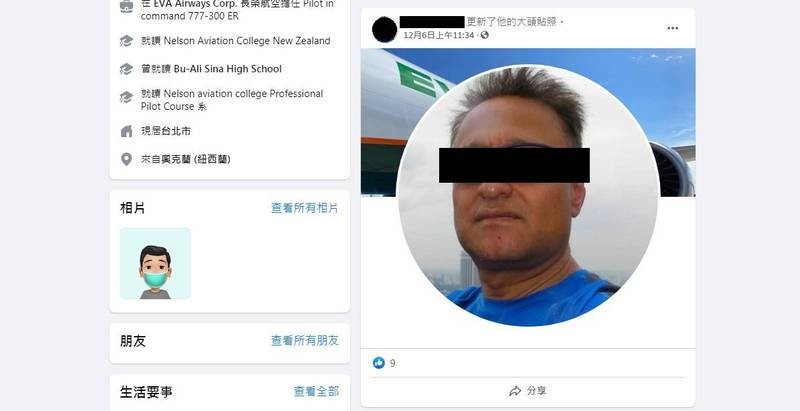 TAIPEI (Taiwan News) — New Zealanders are criticizing a pilot from their country online for causing the first local transmission of the Wuhan coronavirus in Taiwan in eight months.

On Tuesday afternoon (Dec. 22), health minister and Central Epidemic Command Center (CECC) head Chen Shih-chung (陳時中) announced Taiwan's first confirmed local case of COVID-19 since April 12. Chen said that the local infection, Case No. 771, is a woman in her 30s who came in close contact with Case No. 765, the EVA Air cargo pilot from New Zealand who had been associated with a cluster infection of pilots.

On Wednesday (Dec. 23), local media in New Zealand began reporting on the incident, including the fact that he had been fined NT$300,000 for not being truthful about his recent contact and travel history. During questioning by the CECC, the man claimed he could not recall where he had gone and failed to mention that he had come in close contact with Case No. 771 over the course of six days.

Later that day, Taipei City Councilor Hsu Chiao-hsin (徐巧芯) revealed that the pair had taken the MRT from Taipei Main Station to Xiangshan Station and back on Dec. 10. When they were questioned by officials, they claimed they had driven directly to Xiangshan, but surveillance footage revealed that they had actually ridden the MRT and walked around Taipei Main Station near rush hour.

The Taoyuan Pilots Union states that despite having a persistent cough, the pilot had refused to wear a mask while in the cockpit and had sharply rebuked his copilots when they asked him to do so. He also reportedly lashed out at Taiwanese doctors and nurses when he was tested for the disease and said his positive result was fake, alleging that the medical staff were trying to harm him, reported Newtalk.

After New Zealand's 1 News shared the report on Facebook, many local readers denounced the pilot:

"Good. That's how to deal with ppl who are not truthful during this pandemic."

"Is that all? How pitiful that won't stop the LIES. Send a deterrence, the fine should be 50,000 plus revoked passport."

"What an embarrassment to Nz shame!!!"

"What an ass..shaming the rest of us kiwis.."

"So embarrassing! If he comes back then I think he should go straight to quarantine for the full 14 days and pay for it too..."