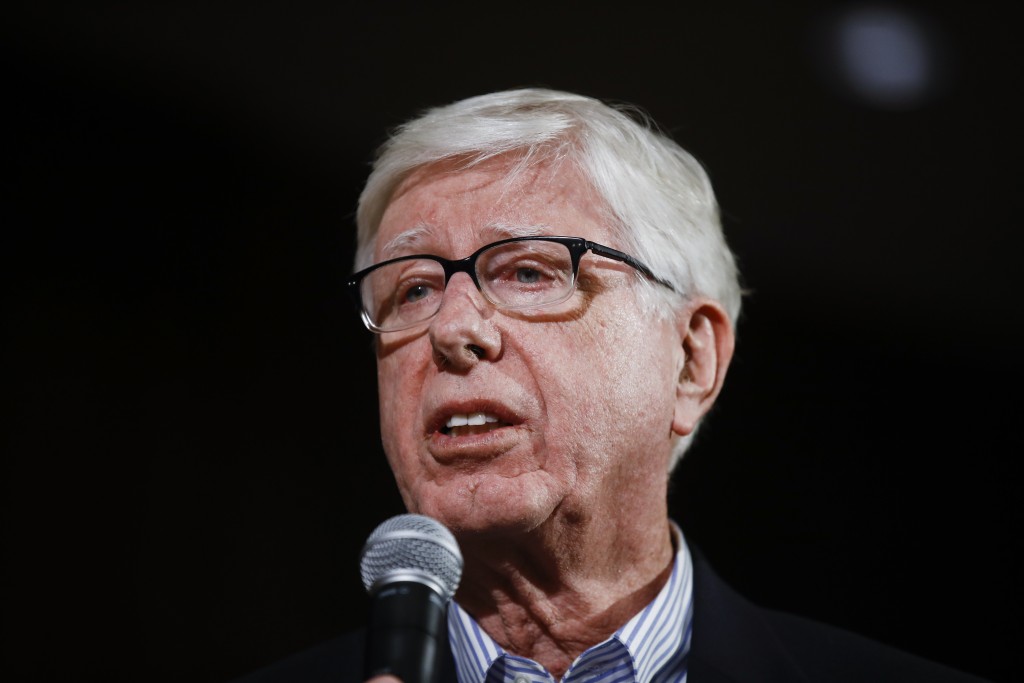 IOWA CITY, Iowa (AP) — When cops pulled over Marquis Jones for loud music one sunny afternoon in October 2017, the 27-year-old Black man got out of his car and ran.

Jones escaped one officer’s tackle and carried a handgun as he fled through a neighborhood in Burlington, Iowa. Police yelled for him to drop his weapon before Officer Chris Chiprez fired seven times, missing Jones. Jones ditched the gun, ran down an alley and into a backyard, and laid on the ground as Chiprez pursued.

Chiprez said he shot and killed Jones after he started to rise and made a hand movement. Relatives say Jones, a father of five, was trying to surrender.

To determine whether Chiprez should face charges, authorities turned to Iowa Attorney General Tom Miller, a Democrat and the longest-serving attorney general in U.S. history, with four decades in the role.

Like more than 30 other cases involving force used by police since 2004, Miller’s office soon cleared Chiprez of wrongdoing, according to documents obtained by The Associated Press through an open records request.

A state prosecutor concluded Chiprez had a reasonable belief that Jones was armed and dangerous when he fired the fatal shot. He rejected claims that the officer knew Jones had dropped his gun, which was later found about 50 yards (meters) from his body.

Police officers are not often charged when suspects end up injured or dead. Laws give them the benefit of the doubt for a dangerous and unpredictable job, and juries are reluctant to convict. But prosecutors who have histories of declining to charge police are facing more scrutiny of their records, particularly following a summer of mass protests calling for accountability.

That dynamic has emerged in Iowa, where lawmakers in June gave Miller new power to investigate such deaths even as some of his office’s previous rulings backing police have disappointed families and civil rights lawyers.

The AP found that Miller’s office has not convicted an officer for improperly using force in at least 16 years, the earliest date for which records were available. It pursued charges against two officers out of 35 force cases reviewed, and both were ultimately acquitted.

The attorney general’s office closed 31 other cases after determining the officers’ actions were justified and sent two other cases to grand juries that did not return indictments.

Linn County Supervisor Stacey Walker, a leading voice for racial justice in Iowa, said the AP's findings demonstrate that the criminal justice system is “not only racially biased, but catastrophically broken.” He said it was time for a new generation of prosecutors who are more reform-minded.

“When police officers make errors and attorneys refuse to prosecute them, that can end a life,” he said. “That's why it's crucial we get this right.”

Miller said Iowa averages about six deaths by police per year, including one of a person of color. He said experienced prosecutors make charging decisions based on the facts and law in each case, and that he's comfortable with the results. He said the lack of convictions does not indicate bias toward police, noting that four cases were pursued through charges or grand juries.

“These were our strongest cases, which indicates in the others we weren’t missing cases that we should have done,” he said. “I believe that we did our duty."

The incidents included 26 in which one or more officers fired service weapons, killing 15 people and injuring several others.

That tally doesn’t represent most force incidents. Until recently, the attorney general’s office could only review them if local prosecutors requested assistance. The AP did not find any instance in which Miller’s office reviewed force used by police in Des Moines or Davenport because prosecutors there handled cases themselves. Other counties requested reviews, citing conflicts of interest.

In last year’s death of 22-year-old Drew Edwards in Maquoketa, Miller’s office referred a review request to another county attorney, citing temporary staffing shortages. Officers who sat on Edwards’ head and body for 10 minutes until he stopped breathing were cleared, but the city and county recently agreed to pay $4.5 million to Edwards’ family.

Some change is coming. A law signed by Gov. Kim Reynolds in June, in response to racial injustice protests, authorizes the attorney general to investigate any officer’s use of force that results in death.

Miller pledged to make independent assessments in each case about whether officers committed crimes or other misconduct. Over the past six months, his office has cleared police in two deaths and has been reviewing a third, though it hasn't used its new power to recommend the suspension or revocation of an officer's certification for misconduct.

State Rep. Ras Smith, a Democrat from Waterloo, pushed for the changes after the shooting death of his friend, Derrick Ambrose Jr. The 22-year-old Black man was fatally shot after running while armed from a Waterloo police officer in 2012 following a disturbance outside a nightclub. Ambrose discarded his handgun while fleeing, and his supporters called for the officer who killed him to be arrested.

Then-Black Hawk County Attorney Tom Ferguson empaneled a grand jury that did not indict the officer in 2013. Critics argued the proceeding was tainted by a shoddy police investigation and testimony from a controversial “force science” expert who is routinely hired nationwide to back officers in fatal shootings.

The city in 2016 paid $2.5 million to settle a lawsuit brought by Ambrose’s father. By then, Ferguson was working in the attorney general’s office as the director of training for county prosecutors statewide.

Miller said he was unaware of concerns about Ferguson’s handling of the Ambrose case when he hired him but that he was a consensus choice who did exemplary work.

Smith said the law would ensure fair, outside reviews in such cases. But some are doubtful that the law, or public pressure, will change outcomes much.

“I do think that bringing outside agencies to do the investigations in these cases is important,” said Bowling Green State University criminal justice professor Philip Stinson. “But I am skeptical that we are going to see lasting change.”

He noted that fewer than 20 officers nationwide are charged in fatal shootings every year, and said investigations are often shaped from the beginning by the assumption that they are justified.

David O’Brien, an attorney who represents Jones’ family and others whose relatives were killed by police, said he's been disappointed by some of the state's rulings, alleging they helped hide police misconduct and seemed to look for ways to exonerate officers.

“This is something that causes me grave concern,” O’Brien said. “Police officers have a difficult and dangerous job. But when they screw up, we shouldn’t be covering up for them and that’s what we’re doing right now. The AG’s office is part of the problem and not part of the solution.”

Miller rejected that criticism as “totally wrong.” “We call them like we see them, without any favor or bias,” he said.

When counties ask Miller’s office to review the use of force, the cases have usually landed on the desk of assistant attorney general Scott Brown, who leads the division that helps counties prosecute homicides.

Records show Brown has exonerated officers in two dozen cases. In 2014, he cleared an officer who entered a Fort Madison couple’s home without a warrant and fatally shot their 27-year-old son, who had been out puncturing tires and was armed with a knife. Months earlier, Brown found it wasn’t excessive for officers to shoot 63 times at an armed Iowa Falls man who was killed after threatening police during a standoff.

In 2016, Brown reasoned that a white officer who pulled the hair of a handcuffed Black man and hit him in the head after a dangerous high-speed chase should not be charged with assault because jurors would be unlikely to convict under the circumstances. He cleared a Manchester officer who tackled a combative detainee in 2010, saying the officer was trying to control the suspect and “that his head struck the door frame and he was rendered unconscious has no bearing on the determination of criminal culpability."

The state’s prosecutions of the two officers who were charged failed.

In 2011, a judge found a Muscatine County deputy not guilty of assault for hitting and throwing to the ground a 24-year-old suspect, saying he didn’t use “perfect judgment” but force was justified. In 2005, jurors acquitted a Shelby County deputy of voluntary manslaughter in the shooting of an unarmed motorist following a chase.

In Marquis Jones’ death, Brown concluded that the man fled because, unbeknownst to officers, he faced outstanding warrants and illegally possessed a handgun.

He said Chiprez had no way of knowing Jones had dropped his weapon, that there was no credible evidence Jones was trying to surrender, and that Jones was a deadly threat even if he was fleeing.

Jones’ mother claims in a wrongful death lawsuit that her son kept the gun for self-defense and that it fell out of his waistband after he was tackled. The lawsuit argues that Jones never pointed the gun at police and that he dropped the weapon as commanded, but Chiprez shot at him wildly nonetheless, then killed him while he was unarmed.

A trial is scheduled for March.