Jalāl ad-Dīn Muhammad Rūmī commemorated 747th death anniversary on December 7 and December 17 at Seb-i Arus Ceremonies held in Konya, one of the major cities of Turkey.

JAKATA, INDONESIA - Media OutReach - 23 December 2020 - When the news of the pandemic first broke early this year, many plans revolving travelling, large weddings and unions for festive celebrations were put on hold for the greater good. While many countries have yet to open their doors for international travelling, Indonesia is one of the few who still allows their locals to cross borders internationally (with the strict ruling to follow the proper SOPs), allowing for Indonesians to carry on with their wanderlust dreams yet witnessing meaningful occasions such as the Seb-i Arus ceremony in Turkey. 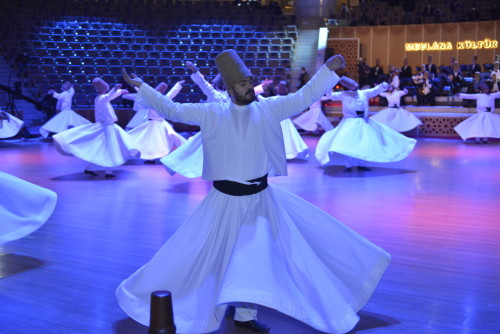 Every year since 1937, Jalāl ad-Dīn Muhammad Rūmī is being commemorated on his death anniversary at Seb-i Arus (Night of Reunion with the Divine) commemoration ceremonies in Konya, the birthplace of the Mevlevi order in the 13th century and home to Rumi's tomb. Konya is a city known not only for Mevlâna, but also for its rich culture that blends significant historical heritage.

2020 marked the 747th death anniversary of the world-renowned Sufi mystic, poet, and scholar Jalāl ad-Dīn Muhammad Rūmī known to the world as Rumi. This year on December 7 and December 17, with the support of the T.R. Ministry of Culture and Tourism and Turkish Tourism Promotion and Development Agency, Sema ceremonies as part of Seb-i Arus ceremonies were held at Rumi Cultural Center, in Konya. Due to the pandemic and limited participation apart from the special guests and invitees of the ministry, the ceremonies were livestreamed on GoTurkey's Twitter and Facebook accounts and real time stories will be shared from GoTurkey's Instagram account (www.goturkey.com).

With the participation of Speaker of the Turkish Grand National Assembly, Prof. Dr. Mustafa Şentop and Turkish Minister of Culture and Tourism, Mehmet Nuri Ersoy to the celebrations, Vice President of International Mevlâna (Rūmī) Foundation, Esin Çelebi Bayru (who is also Rumi's 22nd generation granddaughter and sociologist) and writer and Rumi expert, Ali Bektaş got together with journalists from all around the world.

According to Indonesian travel-enthusiast and social media personality, Wira Nurmansyah, the teachings of Mevlâna about love is widely known in Indonesia and has a great effect over locals such as himself.

"The witnessing of the ritual is deeply touching to me. Not only that, the spiritual atmosphere of Konya has a positive influence for a Muslim such as myself, apart from the many other Muslim attractions located in Turkey," said Wira, who added that this ceremony left him a great impression on his first trip to Turkey on early December 2020.

Another of Indonesia's social media personality, Ashari Yudha had also attended the ceremony with Wira on this trip, which they were personally invited as guests hosted by Turkish Embassy Tourism Office and Tourism Tourism Promotion and Development Agency for this special occasion.

Seb-i Arus ceremonies, which are held every year on December 17, means 'wedding night' in Turkish. The wedding night is known in the Mevlevi order as the night Jalāl ad-Dīn Muhammad Rūmī died. Since Jalāl ad-Dīn Muhammad Rūmī considered his death not as an end but as a reunion with his beloved God, his death anniversary is called the 'Wedding Night' also referred as 'The Night of Reunion'. Rumi interprets death as a return to one's origin, a "return to Allah" due to the fact that its source is a divine ore; according to him death is not the disappearance of the body, but the flight towards Allah. Rumi expresses his philosophy about death with these words: "Everyone refers to it as departing, I, however, refer to it as a reunion."