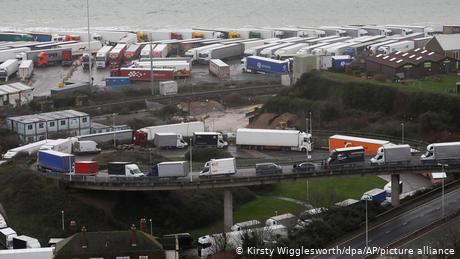 France agreed on Tuesday to soften its anti-coronavirus border measures with the UK after 48 hours of talks with the British government.

A statement from the office of Prime Minister Jean Castex said travelers could enter France provided they had a negative COVID-19 test no more than 72 hours old.

The tests must be of a type capable of detecting the new variant that emerged in Britain, the statement said.

"We'll be making sure that tomorrow we're out there, providing tests," Shapps said, but he cautioned that the whole process would take time. "This will take two or three days for things to be cleared."

A senior EU diplomat told DW that the move by France and other countries to shut off transport links were in response to "a very alarming messaging by the UK government this past weekend."

The French government has set out several groups of people who would be considered as having a "legitimate" reason to enter France. They include foreign truck drivers, medical staff and non-EU nationals who reside permanently in France or any other EU country.

The European Commission has urged EU countries to lift travel bans imposed on Britain, where the spread of the new coronavirus variant has spurred global panic just as vaccines are being rolled out worldwide.

However, border controls are governed by national policy, so each EU country can have its own rules.

The new rules will be in place until January 6 unless reviewed following bilateral UK-France or EU-wide talks.

The discovery of the new variant, just months before vaccines are expected to be widely available, sowed a fresh wave of panic in a pandemic that has killed about 1.7 million people worldwide and more than 67,000 in Britain.