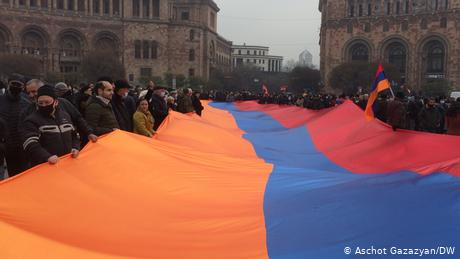 Some 25,000 Armenians descended on the capital, Yerevan, on Tuesday to set up encampments outside government buildings where they plan sustained protests to force the resignation of Prime Minister Nikol Pashinyan.

Citizens are enraged at Pashinyan, who came to power in a peaceful revolution in May 2018, for what they said has called his dreadful handling of the recent six-week conflict with Azerbaijan over the enclave of Nagorno-Karabakh. His signing of a Russian-brokered peace deal that saw Armenia forfeit large territories to Azerbaijan has turned the people against him.

Opposition politicians and their supporters are now pitching tents adorned with Armenian flags around the capital amid chants of "Nikol is a traitor!"

"The government no longer represents us. Its decisions are illegal and, therefore, it must go," Ishkhan Sagatelyan, a leader of the opposition Armenian Revolutionary Federation (ARF) or Dashnaktsutyun party, told fellow demonstrators. He told those gathered: "We've already set up tents, we intend to stay as long as we have to, including sleeping here. Pashinyan must resign."

Strikes will go on until Pashinyan steps down

Another ARF leader, Gegham Manukyan, announced Tuesday that city transportation workers, as well as members of the Yerevan State University trade union and other business organizations, had joined the nationwide strike called by ARF. Manukyan said the strike.

Pashinyan is not without supporters. On Saturday, thousands of them marched alongside him on his way to the capital's Yerablur Military Cemetery to honor soldiers who died in the recent conflict in Nagorno-Karabakh. Television outlets showed the event but also the large crowds that lined the streets to jeer him as a traitor.

On Monday, protesters forced Pashinyan to cut short a three-day mourning tour for the country's 3,000 war dead by blocking his route to the border town of Goris. The town's mayor orchestrated the defiant act and was later arrested.

Although the frequency, scale and intensity of demonstrations have grown continuously since Pashinyan signed the peace deal, he said he has no plans to step down. On Tuesday, he took to Facebook to declare, "I will continue to perform my functions as prime minister."